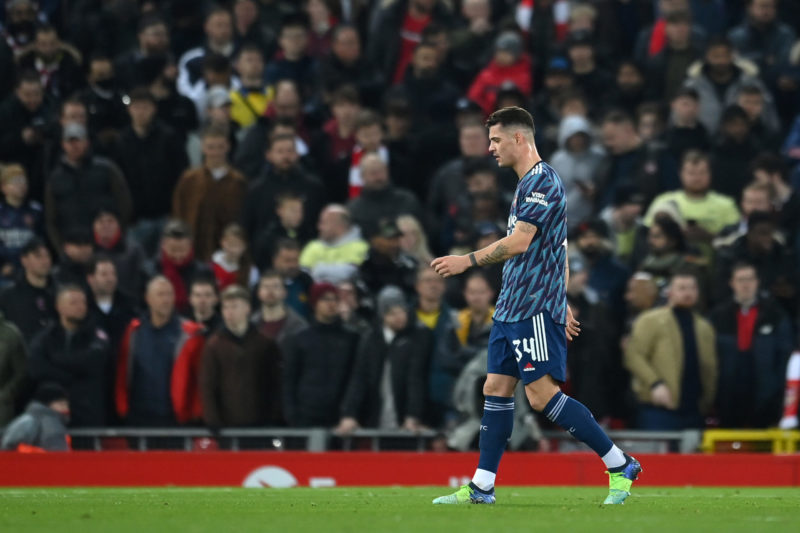 Granit Xhaka saw red for a challenge in the 24th minute of Arsenal’s first leg in teh Carabao Cup semi-final against Liverpool at Anfield.

We can discuss the merits of the red, Xhaka’s intelligence or his reputation leading to reds where others get the benefit of the doubt, but nothing will change, so let’s leave that for now.

Xhaka was sent off for denying a goalscoring opportunity, despite the ball travelling through to the advancing Aaron Ramsdale.

That comes with a one-game ban, ruling Xhaka out of the game against Tottenham on Sunday.

However, because that isn’t Granit Xhaka’s first red of the season so that lands him an extra game, which rules him out of the Carabao Cup semi-final second leg at the Emirates.

Speaking on Sky Sports, Jamie Carragher said, “Initially, I thought does he know he’s there?

“Is it a harsh red card?

“Jota just thinks I’ve got to get my chest there and Xhaka does what Xhaka does, makes an absolutely ridiculous challenge when Jota still has so much to do.”

Ben White told Sky Sports, “It’s not ideal, is it? [playing with 10 men] There’s so much fight in this team, it showed today. We dug deep and we got the result that we needed really.

“I dunno [if it’s a red], he’s looking at the ball and he doesn’t know where the man is, but it is what it is. The boys done well today.”