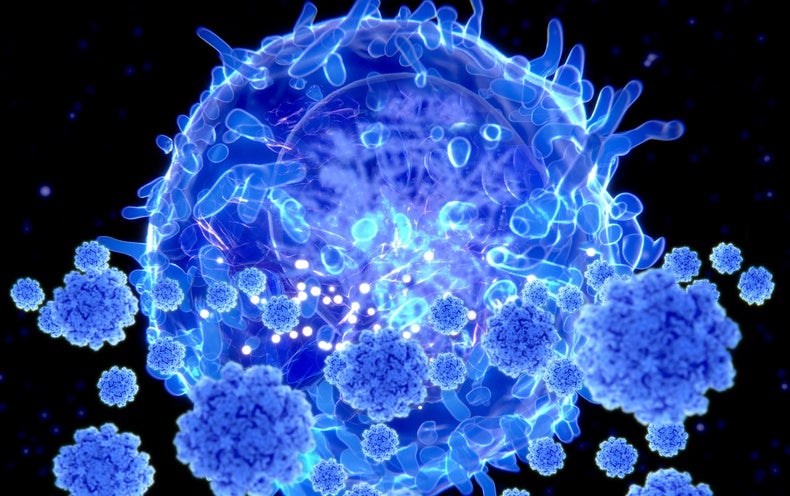 More than two years into the COVID-19 pandemic, scientists are still scratching their heads over a basic question: is there anything they could measure to tell if people are protected?

Researchers call such measures “correlates of protection” —indicators that a person is unlikely to get seriously ill if infected by a pathogen such as SARS-CoV-2, the virus that causes COVID-19.

Data so far have focused heavily on a single parameter: neutralizing antibodies. These specialized proteins, produced by white blood cells called B cells after people get infected or vaccinated, help defend against future disease by blocking viral entry into cells.

That protection is short-lived. Antibody levels start dropping in a few months. Yet “we’re not seeing hospitalizations go up as fast as antibodies are going down,” says immunologist E. John Wherry of the University of Pennsylvania. “So what gives?”

A key source of protection for the previously infected, he and other experts suggest, are memory T cells. These durable immune cells do not necessarily stave off infection but do keep mild symptoms from worsening. They accomplish this by recognizing pieces of a virus or other invaders and activating processes that aid other immune cells or destroy infected cells.

Given their persistence, T cell levels measured in large numbers of people after infection or vaccination could help determine a correlate of protection. In fact, on April 21, Wherry and dozens of other researchers, physicians and biotech representatives sent a letter to the U.S. Food and Drug Administration urging the agency to monitor the abundance of T cells—Alongside antibody levels — to better assess immunity at the city, state or national level to determine the effectiveness of new vaccines undergoing review by regulators.

“The need for many doses is not practical at a population level. We need vaccines that give broader protection and last longer, and there’s important work ahead, ”said Ofer Levy, one of the letter’s signers, in a recent Harvard Medical School press briefing. Levy directs the Precision Vaccines Program at Boston Children’s Hospital and serves on the FDA’s Vaccines & Related Biologics Products Advisory Committee (VRBPAC).

Unlike neutralizing antibodies, T cells recognize a broad set of targets on the virus. Whereas antibodies attach to small fragments of a single protein — the protruding “spikes” on the surface of SARS-CoV-2 — T cells detect, not only snippets of spike, but a wide range of other viral proteins. Each segment is presented on the cell surface by a set of scaffolding molecules called human leukocyte antigens (HLAs) that differ among individuals. (HLA typing is used to match patients and donors for blood or marrow transplants.)

As a result, each person’s T cells “see” spike protein segments differently because different scaffolding proteins hold them up, says Brianne Barker, an immunologist at Drew University. One benefit of this scaffolding process is that it makes T cells less vulnerable to viral evolution. Even if some of the viral protein fragments targeted by T cells have evolved to evade immune attack, others remain unchanged as targets. When a virus is transmitted to someone else, their T cells can go after those unmutated snippets. “If the virus tries to evade your T cells and then gets transmitted to me, all that evasion and all that evolution it has done is not useful because my immune system is showing a different target,” Barker says. “It’s really hard for a virus to evolve around T cells.”

Research backs this up. In a study described in a January Cell paper, scientists at the La Jolla Institute for Immunology analyzed blood from 96 adults at various times after receiving a COVID vaccine. By six months after vaccination, levels of neutralizing antibodies had fallen substantially, whereas T cell responses remained strong even against Omicron.

Furthermore, in another study, people showed evidence of high-quality T cell memory no matter how many times they were exposed to the virus through either vaccination or infection. And the T cells did not succumb to “exhaustion” —a dysfunctional state that can arise with chronic stimulation and that some scientists feared might occur with repeated vaccinations. These findings were published April 5 in Nature Immunology.

Still, more emphasis on T cell research is needed because, for all that has been demonstrated so far, few studies have directly proved that T cells are helping protect against COVID. “We all think they are, but it’s actually very hard to show,” says Paul Thomas, an immunologist at St. Jude Children’s Research Hospital in Memphis, Tenn., Who led the Nature Immunology research.

In one study, scientists collected blood plasma from a set of macaques they had infected with SARS-CoV-2 and found that infusing the plasma into naive animals helped them resist subsequent infection. If the researchers depleted T cells from the plasma prior to transfer, those recipients fared worse. Evidence for protective T cells also comes from small human studies in which cancer patients with impaired antibody responses had better survival rates if they had greater numbers of T cells.

But immunologists still need more answers. If memory T cells do contribute to immune protection, how long do they stick around in the bloodstream? How many are needed to stave off severe disease? “We do not know the answers to any of those questions because we are not measuring memory T cells at scale in enough patients,” Wherry says.

Even in the absence of large-scale monitoring, researchers have been studying patients’ T cells throughout the pandemic Wherry’s lab, for example, has done deep analyzes of immune responses in 60 to 80 vaccinated individuals for more than a year — but only a handful have gotten breakthrough infections. The data are intriguing, but there is “no statistical power to know whether they got infected because their T cells were low or because they were engaging in high-risk behavior like going to bars every night,” he says.

Getting those answers would require tracking thousands to tens of thousands of people, Wherry says. With that larger cohort, the analyzes in each person could be much simpler — researchers could find out how many SARS-CoV-2-specific T cells people have and where in a range of T cell measures they fall.

A major challenge in moving forward is technical: T cells are much harder to study than antibodies. Standardized assays can measure SARS-CoV-2-specific antibodies in tens of thousands of blood samples per day, and the process can be automated with robots. T cells first need to be purified out of blood samples — a procedure requiring several hours of work by a lab technician — followed by culturing the cells, stimulating them with SARS-CoV-2 peptides and measuring secreted molecules. T cell protocols “are much more involved,” says John Altman, an immunologist at Emory University. Doing the analyzes on a large scale “would be hugely expensive, labor-intensive, and hard to control and standardize across different sites.”

The main motivation for measuring T cell responses “is to guide decision-making for improving the vaccines,” Altman says. “We do not need the data to give us better ideas about what to do. We already have reasonable ideas about what to do, and we should just do them. ” In a Nature Immunology commentary last month, Altman proposed bolstering immune memory by broadening the number of potential SARS-CoV-2 targets the immune system is poised to fight. This could be done by including additional nonspike antigens in future vaccine formulations to stimulate an immune response — a strategy already being implemented with T-cell priming peptide vaccines.

Researchers are, in fact, working toward a streamlined T cell testing process. Measuring T cells is difficult, Wherry says, but he elucidated several new approaches in a March 24 Science Immunology viewpoint article. One is an assay that would bypass laborious cell purifications and manipulations by detecting activated T cells in blood samples squirted into tubes premixed with bits of SARS-CoV-2 proteins. Another approach, which is more expensive but could be scaled up more easily, uses DNA sequencing to detect SARS-CoV-2-specific T cells in whole blood samples rather than the more cumbersome methods that measure molecules secreted by purified T cells in tubes or dishes.

The letter to the FDA got an “enormous response” from many who agreed T cell measurements should be essential for future vaccine studies, Wherry says. “It was one of the most homogenous types of responses I’ve seen for anything, given how polarized we are these days. I think there’s some momentum. ”