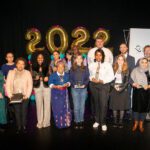 The awards categories ranged from Apprentice and SEND students of the Year, to honours for outstanding community service as well as all round excellence. There were awards for exceptional performance for employers, including the Metropolitan Police and Ealing Eclectic.

West London College Principal Karen Redhead OBE opened the ceremony with a selection of College highlights from winning national awards, commendations and accreditations to external awards our students have won.

Karen said: “The awards are a celebration, recognising the talent, hard work and determination of our students and the role our partners play in helping to shape the lives of our students.”

Guest speaker Anna Hanvey, one of our Public Services Level 3 students, spoke at the beginning of the ceremony. Later in the evening, she went on to win the Jamal Edwards MBE Contribution to the Community Award, which recognises outstanding community impact. Anna will go to Gambia in the new year to help renovate a school. Anna needs to raise £800 for her trip. Jamal Edwards MBE was a former Creative Media student at Ealing Green College who went on to forge an astonishing career as a music producer, DJ, entrepreneur and community activist.

Anna said: “My main motivation to go to Gambia is to help the village children by painting the classrooms with other volunteers. I’ll also be taking part in some lessons, visiting families to cook meals with them and visiting markets and other venues to learn about Gambian culture.”

Jahmi Freeman-Wright and Sharnah Harper were joint winners of the Hammersmith 16-18 Excellence award for their outstanding performance in the National Seafood Finals in Grimsby earlier in the year. Jahmi who works at The Chesterfield, a boutique hotel in Mayfair and Sharnah who works as a pastry chef at The Montague on the Gardens are both exceptionally busy people who still find the time to achieve well at College.

Sharnah said: “Winning the award feels like a wonderful prize for all of our hard work and will help us to achieve even more things for the future.”

Some students were so overcome by winning their awards they were moved to make acceptance speeches like Eldouma Mansour who won the Higher Education Student of the Year award.

Eldouma said: “All of us no matter who or at whatever age must learn something new every day. If we don’t, that is a day lost to us forever.”

Sally Ishag was an inclusive apprentice working on a Customer Services Level 2 apprenticeship which she passed successfully, despite Covid lockdowns.

Sally explained her delight at winning the award: “The first award I ever won was a Jack Petchey award at school for achievement. It was so exciting when I found out I had been nominated for this award, and I was overjoyed to actually win it.”

Sally now works as a receptionist at 245 Hammersmith Road, an innovative communal shared workspace in Hammersmith also offering a plaza, urban park and an engaging range of community activities.

The West London College Employer of the Year Award went to the Metropolitan Police for their work with the College as a community partner.

Met Police Officers have delivered careers sessions to all of our Public Service students and those interested in a career with the police.  Luke Milton, one of the officers who came to accept the award with colleagues Tom Cooke, Ben Lambert and David Williams, is the outreach lead for West London.

Luke and his colleagues will visit West London College Public Services students shortly to talk about Access Pathways, which are a new scheme to recruit more detectives and police constables to the Met.

The West London College Student Awards Ceremony 2022 took place in the LAMDA Sainsbury Theatre, which is opposite our Hammersmith and Fulham College. The delicious buffet of luxury canapes were made and served by West London College catering and hospitality students. Caoimhe (pronounced Kee-vah) Patterson and former West London College Sports student and Makaton signer, signed at the event.

TO VIEW THE STUDENT AWARDS 2022 CEREMONY, PLEASE WATCH THE VIDEO BELOW:

THE FULL LIST OF WEST LONDON COLLEGE WINNERS AND THEIR AWARDS.

YOU CAN SEE THE FULL LIST OF NOMINEES FOR EACH AWARD HERE.

During 2021-22, West London College delivered programmes to over 10,000 students, and we worked with over 600 different employers. We trained around 300 adults in employability skills to progress into work and had around 400 apprentices studying over 30 different apprenticeship standards.

Whilst the majority of our students are based in West London, we also deliver training further afield to over 3,000 students through distance learning programmes and worked with strategic partners to deliver in the South West, midlands and North West.