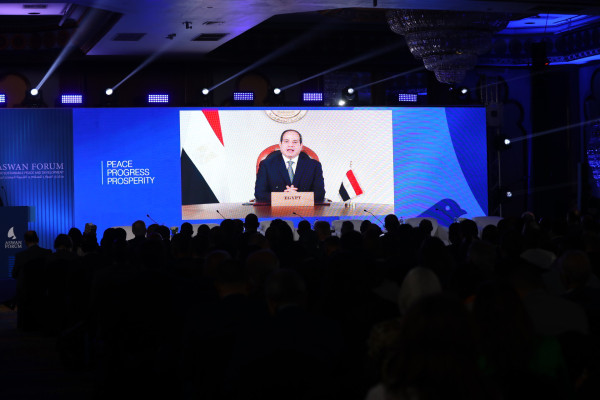 The third Aswan Forum for Sustainable Peace and Development ended on Wednesday, with calls to tackle the multiple crises, new and old, facing the African continent.

Egyptian President Abdelfattah El-Sisi launched the proceedings on Tuesday, with a call for a united response to the continent’s ills. He reminded the audience of ministers, development representatives, civil society groups, and others, that Africa was still gripped by the impact of the Covid-19 pandemic.

“The Forum is being held at a critical time, where the global community is facing several political and economic challenges that affect food and energy security. This sheds light on the food crisis Africa is facing, which requires measures and procedures to address these growing risks,” the Egyptian leader said.

This year’s edition of the Forum takes place in the context of an increasingly volatile international situation. Disruptions in energy and commodities markets have resulted in price spikes that are negatively affecting many African countries that rely on food and fuel imports. In addition, the Russia-Ukraine conflict has deepened food shortages. Participants at the two-day event include heads of state, and representatives of the United Nations, African Union, and the African Development Bank, which is a strategic partner of the Aswan Forum.

On Tuesday, much of the focus was dedicated to the global climate conference, COP 27, also to be held in Egypt, in November this year. Many speakers highlighted the mismatch between Africa’s needs and the resources on offer, especially when it comes to climate finance. The continent contributes just 3% of global greenhouse gas emissions. Yet the region is bearing the brunt of extreme weather events, and suffering a serious funding deficit.

United Nations Secretary General António Guterres reminded the audience of the wide range of problems confronting Africa: “We need action — now…We need to silence the guns across Africa, and address conflict’s many roots — by tackling inequalities and discrimination, and strengthening governance, institutions, public services and justice systems. And we need bold climate action.”

African Union Commission Chairperson Moussa Faki Mahamat recounted the steps that the pan-African body had taken to address the Covid-19 pandemic, including a climate change and resilience development strategy and action plan, adopted earlier this year. He listed proposals to help Africa address the climate crisis. These include securing the $100 billion annual funding that developing nations promised in 2015 toward climate action in developing countries. He said this should be central to COP 27 negotiations. He also urged African countries to insist on their just transition model, which calls for a more gradual switch to low-carbon energy forms to accelerate development.

During a panel discussion, African Development Bank Acting Vice President and Chief Economist Kevin Urama said it was time to consider an alternative approach to the continent’s funding. “There are several reasons climate finance is not flowing to the most climate-vulnerable countries in Africa. The structure of climate finance mirrors the global financial architecture, which is structured in a way that it flows to countries that have capacity to prepare bankable projects and have low-risk profiles,” said Urama, who is in charge of the Bank’s Economic Governance and Knowledge Management Complex.

Urama said: “Going into COP 27, there is a need for developed countries to meet their commitments to make available $100 billion to developing countries for climate adaptation and mitigation. Because climate finance does not flow to the most climate-vulnerable countries, there is a need for a portion of the $100 billion in climate finance to be set aside for the most-climate vulnerable countries in Africa, which we classify as African Development Fund countries.”

The African Development Bank estimates that Africa will need $50 billion annually by 2050 to adequately address climate adaptation alone. To implement the Nationally Determined Contributions, climate targets required by the landmark Paris agreement, it will cost Africa about $1.6 trillion between now and 2030. That amounts to about $128 billion annually.

Yet, current climate finance flow to the continent between 2016 and 2019 was about $18.3 billion annually. This leaves an annual climate finance gap of $118 billion. “There is a need for innovative financing mechanisms to fill the gap to head off climate catastrophe for the world. This should be a common agenda for the global community. Because when there is greenhouse gas emissions anywhere, there are climate risks everywhere,” said Prof. Urama.