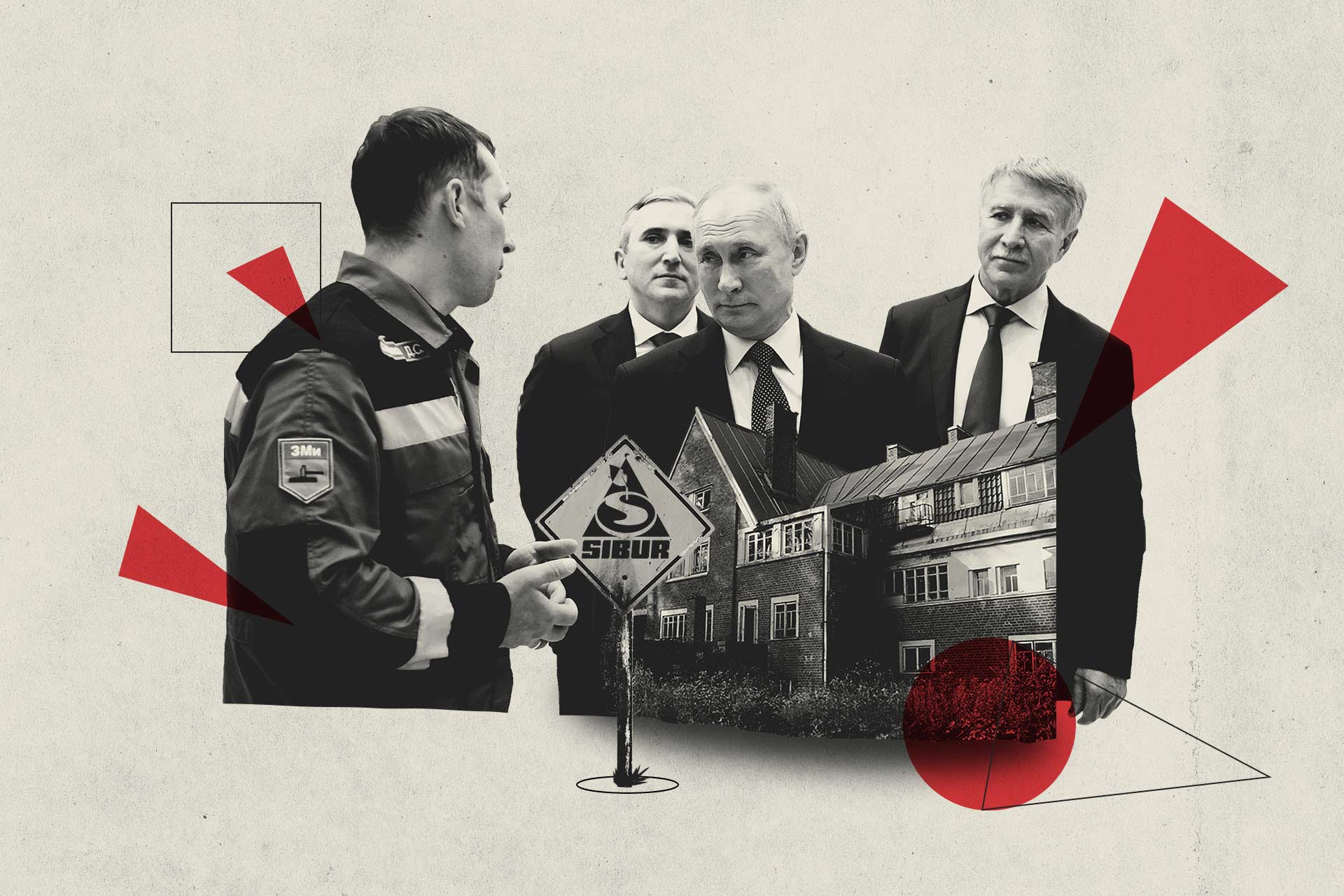 Russia’s largest petrochemical company, Sibur, has long been associated with President Vladimir Putin. His old friend, oligarch Gennady Timchenko, acquired a significant stake in the company in 2011. And his former son-in-law made headlines when it was revealed that, after marrying Putin’s daughter, he picked up a 17-percent stake in Sibur that made him a billionaire.

Now, for the first time, leaked emails show that the company spent large sums on a villa linked to the president — with top-level employees not even understanding why.

The house is a stately mansion on the Gulf of Finland known as Villa Sellgren. In 2016, TV channel Dozhd reported that it had become a vacation destination for Putin. 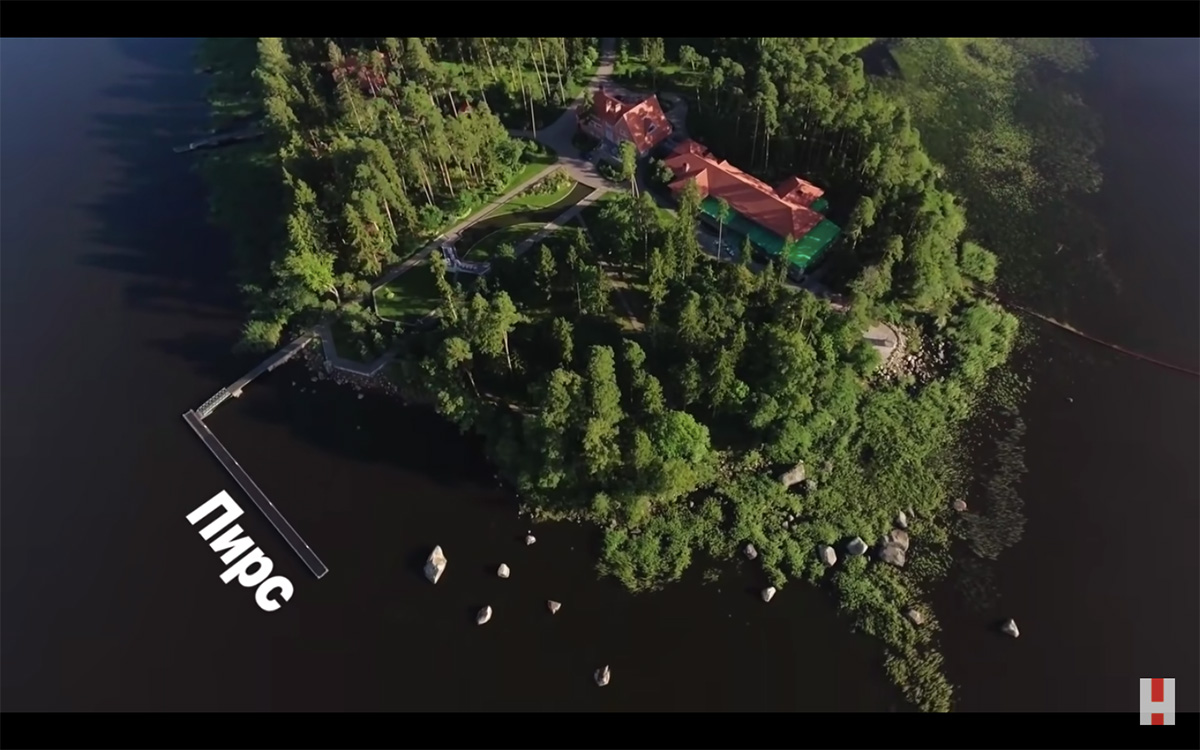 In an independent investigation, opposition leader Alexei Navalny made the same claims, and pointed out that a banner near the villa’s entrance identified it as a recreation center for Sibur. He suggested that the Sibur sign was a way of covering up Putin’s use of the villa. 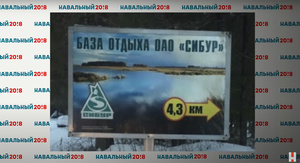 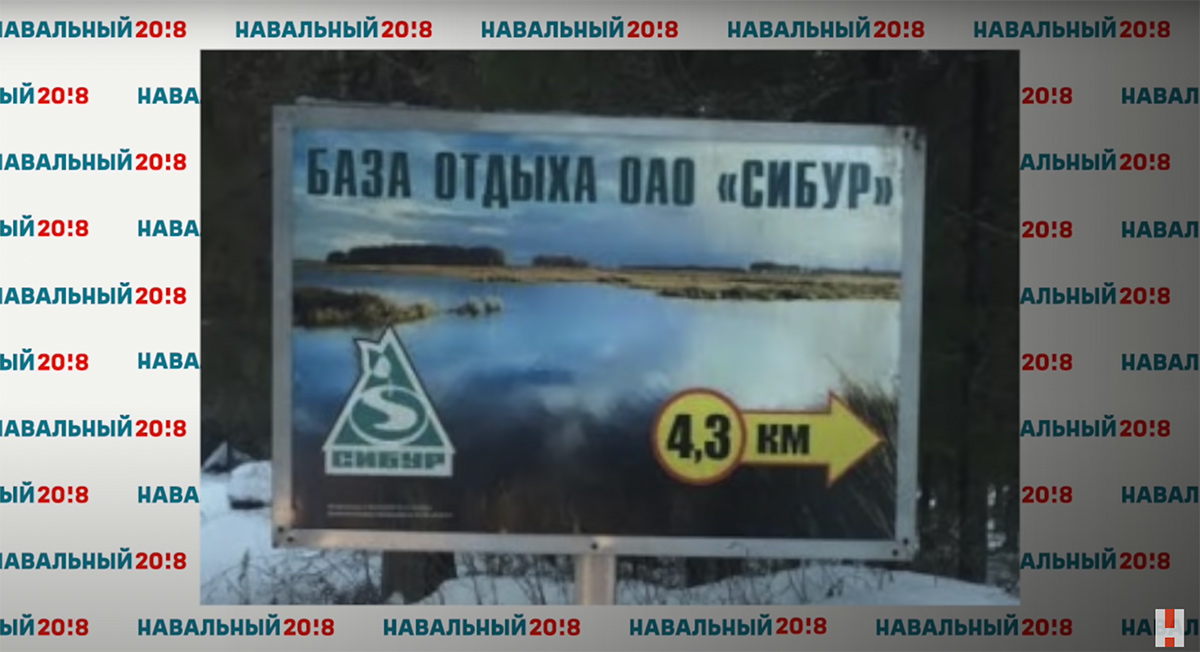 Villa Sellgren (above). A Sibur banner near the entrance to the villa, highlighted by Alexei Navalny in a 2017 investigation (below).

A leak of emails

The emails were leaked to OCCRP by the same source who provided emails that led to major revelations about Putin’s son-in-law’s acquisition of valuable Sibur shares in 2020.

from the company obtained by OCCRP provides new evidence that his hypothesis was correct.

Sibur, it turns out, agreed in 2012 to pay over $1 million per year to rent the villa from its owner, Oleg Rudnov, an old friend of Putin, through a property management company called Nogata.

But the petrochemical giant was not actually allowed to use the facilities, and some of its senior executives remained mystified by the arrangement, the emails show.

“The director [of Nogata] told me she has a task, to rent out the villa, and afterwards we can do whatever we want, even do corporate celebrations there,” wrote Sibur’s managing director, Mikhail Mikhailov, in apparent surprise. “Did I understand correctly, are we renting this for OUR purposes? Can we use it?” he asked the chairman of the company’s board, Dmitry Konov, in an August 2012 email.

“We CANNOT use it,” Konov responded. 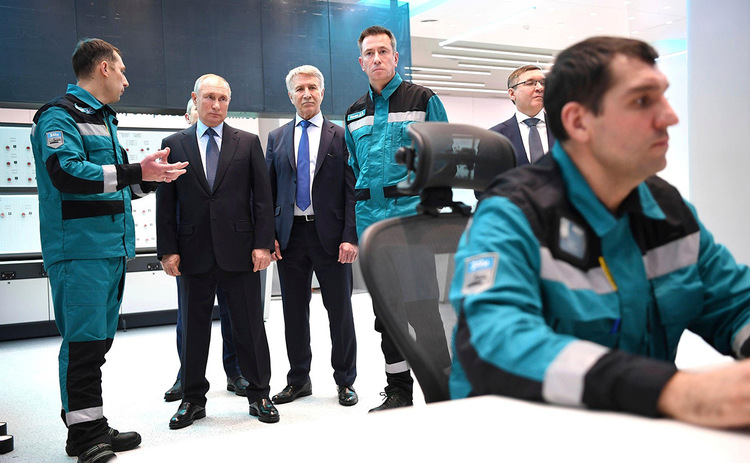 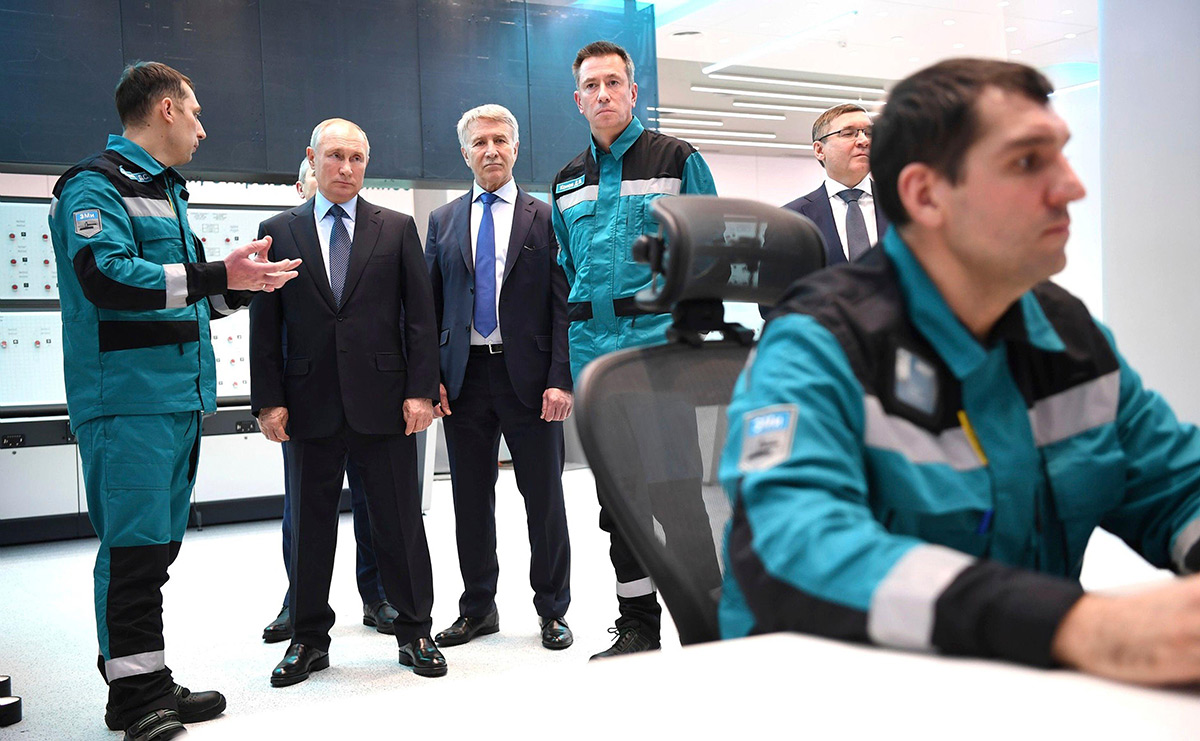 Vladimir Putin (second from left) and Dmitry Konov (fourth from left) tour a petrochemical plant together in 2020.

Nogata, too, has close links to Putin: It belongs to Nikolai Shamalov, a friend of Putin and the father of Kirill Shamalov, who married the president’s daughter in February 2013.

In June 2013, a Nogata representative wrote to Sibur explaining that a new management company would take over running the property, and that Sibur’s lease must be terminated within ten days.

To arrange a new lease with the new management company, she wrote, Sibur would need to speak with a man named Pavel Zaitsev.

The reason for this change is unclear. But Zaitsev’s involvement in arranging the rental of the distant villa is notable because he works for Bank Rossiya, the lender sanctioned by the United States for its connection to Putin’s inner circle — and because he’s tied to LLCInvest, a group of companies built around the bank that hold many assets linked to Putin. (Read OCCRP’s investigation into LLCInvest.) Zaitsev declined to comment.

🔗A Seaside Perk for a Sibur Executive

The resort, called Strela, was owned by the town of Gelendzhik until 2014.

It was then acquired by a private company called Investstroy, which is owned by a woman named Tatiana Kuznetsova. Both she and her husband, Oleg Kuznetsov, are closely associated with the famous “Putin’s Palace,” which is perched on a nearby cliff.

According to Navalny’s investigators, Kuznetsov is an employee of the Federal Protective Service and headed the military unit that helped develop the palace in the early stages of its construction. His wife’s company, Investstroy, was listed as the manager of the palace between 2014 and 2017.

Putin’s Palace is held by an LLCInvest company, and there are signs that Strela is also connected to the holding: Its director between 2014 and 2018 was Alexei Vasilyuk, who headed two other LLCInvest companies at the same time: Yuzhniy Tsitadel, which is supposed to grow mussels in the nearby coastal waters, and Apex Yug, which owns extensive vineyards near the palace.

Local residents call the resort “Alina Kabaeva’s dacha,” referring to a rhythmic gymnast who is reportedly Putin’s longtime partner. The reason for the rumored connection to her is unclear, but the resort is heavily guarded.

Leaked emails from Sibur’s top management reveal what it’s used for, at least in one case.

From at least 2015 through 2018, Sibur board member Marina Medvedeva was renting a guest cottage on the grounds of Strela resort, the emails show.

The resort itself took care of all the upkeep: It bought curtains and furniture, planted a rose garden, did the housework, and prepared the cottage for guests. For these services, Medvedeva paid another 100 rubles — just over a dollar — every month.

When reached for comment, Medvedeva said that the rent she paid was determined by market prices and that she paid additional on-the-spot fees that made up “the majority” of her payments. No such fees are mentioned in a rental agreement for her cottage that appeared in the leaked emails.

Using satellite photos, reporters counted 25 such cottages on the territory of the sanatorium. Who uses the rest is unknown, but the resort is heavily guarded against prying eyes.

For clarification on what to do after Nogata’s email, which they appear to have found perplexing, Sibur employees turned to Konov, the board chairman at the time.

“Act in accordance with the proposed recommendations?” one asked. “What to do with payment (keep paying?)?”

Konov promised to “ask.” Two days later he suggested that Sibur’s vice president, Mikhail Mikhailov, discuss the issue with Kirill Shamalov, who was still Putin’s son-in-law at the time. But even before the discussion took place, Konov instructed Mikhailov: “we continue to pay.”

Soon after the rearrangement, Sibur employees noted that the new management was not letting them visit the villa, which they were supposed to do periodically to ensure Sibur’s payments were justified.

“A preliminary answer was received from the new management company with a rejection [of our request] to visit the property,” a board member wrote to Konov. Once again, the matter was referred to Shamalov.

When reached for comment, a Sibur representative described the company’s arrangement as a “sublet” that gave it only limited, non-exclusive access to the property between 2012 and 2013. He said Sibur used it for corporate events, such as management seminars and team-building exercises, and that the company had no information about its use by Putin. He provided an additional response from Konov, Sibur’s board chairman at the time of the rental, who said the idea Sibur would carry out the president’s personal wishes was “absurd.”

None of the documents seen by reporters describe the arrangement as a limited “sublet,” and the sign designating Villa Sellgren as a Sibur “recreation center” is difficult to square with such an arrangement. (In an additional response, the company representative said that the sign had not been placed by Sibur, and noted that its layout and formatting did not match Sibur’s standard branding.)

In 2017, the day after Navalny released his investigation, the leaked emails show Sibur executives strategizing about how to contain social-media chatter linking the company to the villa — which they referred to only as “the real estate.”

“We are reacting here and there, but keeping in mind the fast organic growth of the comments around the video … our comments are not noticeable. (see attachment)”

Attached to the email is a list of online comments defending Putin and Sibur, and attacking Navalny.

“Even if he has this dacha, what now?” said one, purportedly from a man named Sergei. “You’re not going to store your mushrooms and salt your fish in a shed 🙂 🙂 :).”

Research on this story was provided by OCCRP ID.

Fact-checking was provided by the OCCRP Fact-Checking Desk.