Two substantive national deputy chairmen of the Peoples Democratic Party (PDP), Elder Yemi Akinwonmi (South) and Senator Nazif Sulieman (North) have locked horns over who should take over the national chairmanship position of the party in acting capacity following the court order on Prince Uche Secondus to step aside.

In a new twist in the ongoing leadership crisis in the main opposition party, Suleiman declared Akinwonmi incapable of assuming the post even when the party’s constitution favours him.

The Deputy National Chairman (South) was the first to declare himself the acting national chairman on Tuesday citing Section 35(3) (b) of the PDP constitution, which says that in the event of the removal or resignation of the national chairman, a national deputy chairman from his zone should assume the post in an acting capacity.

Pursuant to this, Akinwonmi had issued a statement proclaiming himself and also announcing the indefinite postponement of the National Working Committee (NWC) meeting planned for Tuesday.

In explaining that he assumed the office in the absence of the substantive National Chairman, Prince Uche Secondus, who was ordered by the court to stop parading as such, Akinwonmi said: “Section 35(3) (b) of the constitution of the Peoples Democratic Party empowers me to summon and preside over party meetings in the absence of the national chairman.

“Our attention was drawn yesterday evening to a court order which purports to restrain our National Chairman, Prince Uche Secondus, from summoning and presiding over the meetings of the organs of the party.

“In the foregoing circumstances, as Deputy National Chairman (South) of the Peoples Democratic Party, after due consultations and in the exercise of the aforesaid powers, [I] hereby deem it fit and proper to postpone the National Working Committee meeting earlier scheduled for today till further notice to allow for broader consultations in the overall interest of our party,”

However, Suleiman, in a press conference later in the day, said he was the one that has become the acting national chairman of the PDP.

He conceded that going by the constitution, a deputy national chairman from Secondus’ South zone ought to act in his stead but has not been attending meetings because he is allegedly incapacitated.

Suleiman said based on this, he, as the other national deputy chairman of the party, has assumed the position in an acting capacity and has now fixed a meeting of the National Executive Committee (NEC) for Friday.

He said this followed a meeting of the NWC, which he presided over on Tuesday attended by only five of the 18-member committee.

Suleiman explained why he took over the top PDP post: “Members of the NWC, we will recall that this morning we are in possession of a valid court order, from a high court in Degema, Rivers State. Issuing an order removing Secondus as a member of the Peoples Democratic Party (PDP), as well as National Chairman of our great party.

“A court has also ordered that from the 23rd of August 2021, Prince Uche Secondus should stop parading himself as a National Chairman. NWC hereby comply fully with the court order.

“Consequently, the NWC hereby calls for an emergency NEC meeting on Friday, 27th August 2021, at 10 am prompt to deliberate on matters affecting the party.

“You are all aware PDP is a law-abiding party, the party that follows due process. So we have received this order and this is it.

“On this note, distinguish NWC members I hereby take full charge of the Peoples Democratic Party (PDP) as Chairman in an acting capacity.

On whether there is now a division in the NWC, Suleiman explained: “Let me make this very clear that this meeting was called for 2 pm and like I said, the deputy national chairman south has been incapacitated and did not attend any meeting in the last 9 to 10 months as far as NWC is a concern. He has not been in communication with any member of the NWC for the last 10 months. And like I said this party must continue its process.

“This is the resolution that was passed by the expanded caucus. And this was the resolution passed by the NWC in our last meeting and we all agreed that there will be a meeting today, a meeting that was supposed to be presided over by the National Chairman. Unfortunately, the court order came from a competent court and stopped the chairman from acting as chairman of the party.”

Drama soon continued as Akinwonmi stormed the Wadata Plaza national secretariat of the PDP hours after Suleiman spoke to say that he is the authentic acting national chairman of the party.

Accompanied by the 2019 governorship candidate of the party in Ogun State, Ladi Adebutu, Akinwonmi asserted that fate has bestowed to the office on him, declaring that there is no victor, no vanquished in the crisis.

He appealed to party members to join him in running the affairs of the party.

On the meeting presided over by Nazif, the acting national chairman said “everything conducted while I was not here is null and void. At the appropriate time, we will call on a meeting of National Executive Committee, NEC and the Board of Trustees, BoT.”

When informed about Suleiman’s assertion that he was incapacitated, Akinwonmi responded: “Sickness is not a friend of anybody. I was on my way to Wadata Plaza when I had a stroke in my car. I was at the Cidacrest hospital for three months. Anybody can be sick but I am getting back and better. It was not my making to be sick. In the past, I could not stand up but I stood up singing the national anthem here this afternoon.

“It is wrong for people to start making reference to my ill health. Anybody can be sick but I am getting better now.”

Also speaking, the National Secretary of the party, Ibrahim Tsauri, said no faction exists in the NWC, adding that Nazif only presided over the meeting of the working committee earlier because Akinwonmi was not present at the time.

He added: “NWC was one under Secondus and there was no division. We are here to adopt the doctrine of necessity. PDP is a law-abiding party, with people of integrity and respect. PDP is the only political party in Nigeria today. We never changed our name, we never changed our logo.

“Yesterday (Monday), we were faced with something very challenging, which we never expected. We have no other option but to accept the order of the court. There are people that took this matter to court. We have given the judgement to our lawyers to study.” 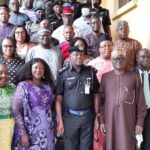