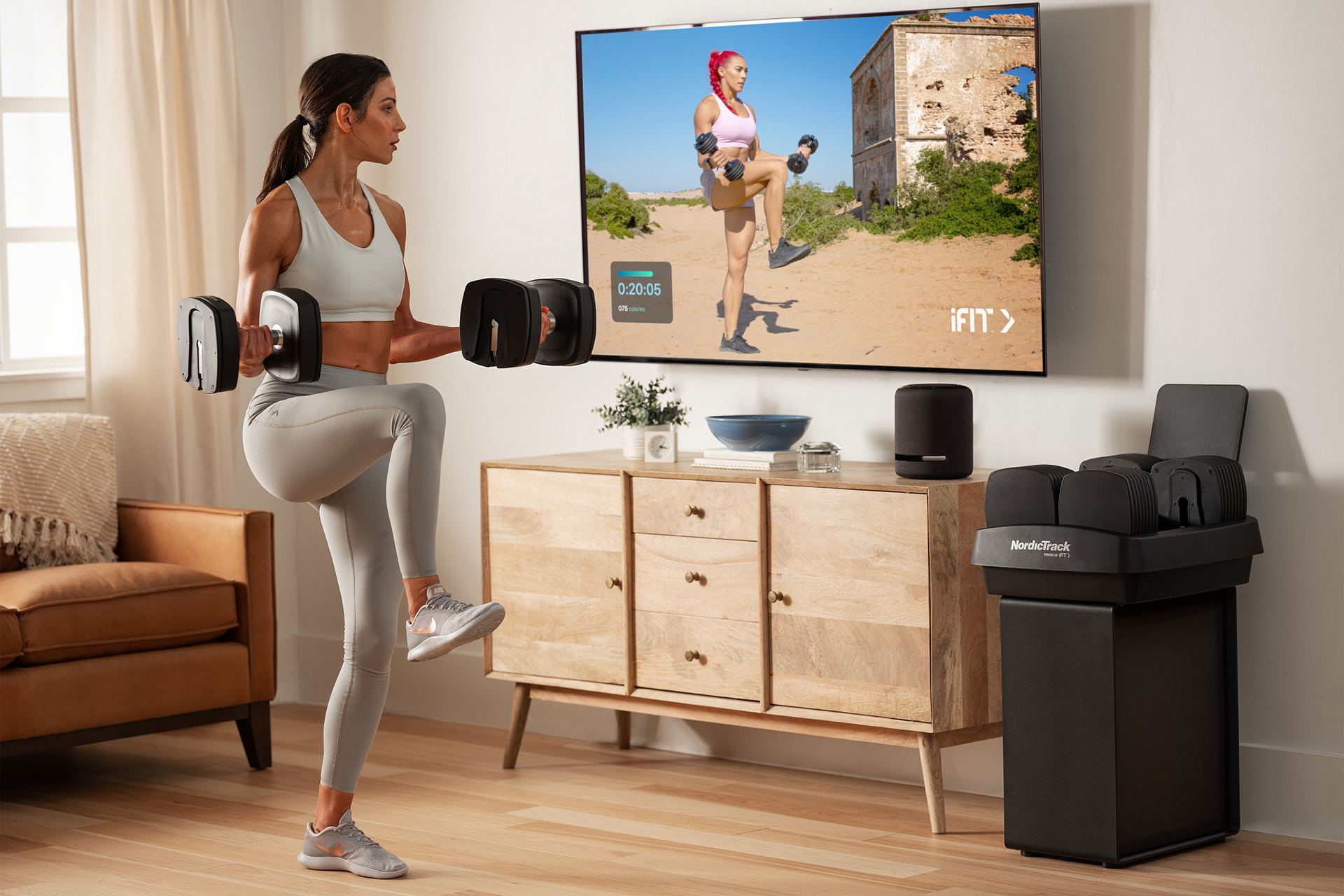 WFH didn’t just mean working from home. For those with the drive, it also stood for workouts from home. Many companies boomed as they adjusted to many of us shifting our training and exercise from gym to living room / spare room / that corner of the bedroom. Now, the pendulum is swinging back as some gyms tentatively reopen, and we return to the squat rack that didn’t quite fit into our tiny studio apartment. But that won’t stop fitness companies from introducing new blends of gear with tech tricks, hoping you’ll be willing to upgrade your gear.

NordicTrack’s Adjustable Dumbbells can connect to any Amazon Alexa-capable third-party device to quickly adjust the weight from 5lbs to 50lbs (in 5lb increments) with just your voice. The voice assistant, sadly, won’t cajole you into a few extra reps.

There’s a subscription training service to go along with the $429 dumbbells — available now — but it’s thankfully not required.

is one of the most-anticipated games coming to PS5. But just over a month before the action RPG arrives , it appears an unfinished version of the game has leaked. It’s another problem for Sony. Months before The Last of Us Part II was released, a large portion of the game, including cutscenes with major story spoilers, leaked online.

NASA had previously remotely confirmed the presence of the substance.

China’s Chang’e-5 lunar lander has found water on the surface of the Moon, marking the first-ever time scientists have found on-site evidence of the substance on Earth’s satellite. Chinese researchers claim the lander detected signs of water molecules or hydroxyl, a close chemical cousin of H2O.

Chinese scientists believe most of the molecules came to the Moon through a process called solar wind implantation. Charged particles from the sun drove hydrogen atoms to the lunar surface where they later bonded with oxygen to form water and hydroxyl. The study builds on findings NASA published in 2018 when it found evidence of water on the sunlit surfaces of the Moon using an airborne infrared telescope.

To catch a Snorlax.

The LAPD has fired two police officers for ignoring a robbery on April 15th, 2017, deciding instead to play Pokémon Go. Rather than respond to a radio call demanding backup for a theft at Macy’s in the Crenshaw Mall, the officers reportedly spent the next 20 minutes driving around to catch a Snorlax.

Lozano and Mitchell denied playing Pokémon Go and insisted they were only “having a conversation” about the game, but the in-car camera revealed they discussed the robbery call and chose to ignore it. Another officer also witnessed the cruiser leave the area after the call.

It will launch on January 31st.

The Associated Press (AP) will start selling its “award-winning contemporary and historic photojournalism” as non-fungible tokens on January 31st. The news agency teamed up with blockchain technology provider Xooa to develop a marketplace for its NFTs, which will debut with an initial collection it will release after opening.

AP’s initial collection includes digitally enhanced Pulitzer Prize-winning images across categories such as space, climate and war. Each one will include the image’s original metadata that shows its location, the time and date it was taken and the equipment and settings the photographer used for the shot.