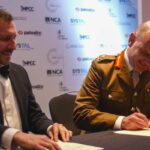 TechTalent, one of the UK’s leading tech training and placement providers, has signed the Armed Forces Covenant, signalling its commitment to supporting veterans with the skills and contacts they need for a fresh career in tech.

The Armed Forces Covenant supports service leavers, military veterans, and their families as they reintegrate into civilian life following a career in the armed forces.

Through government-funded tech courses, TechTalent will be offering veteran armed forces personnel the opportunity to take its tech training courses, including its cyber security training course.

Cyber security roles require detailed security and background checks and, as similar security checks will already have been passed during a military career, those who have served in the armed forces and their families could be fast-tracked for such roles upon successful completion of their course.

TechTalent and Major General Marc Overton, acting on behalf of the Ministry of Defence, signed the Armed Services Covenant at the recent National Cyber Awards. Present to witness the signing were Rt Hon Tom Tugendhat (Minister of State for Security), Christine Maxwell (Director of Cyber Defence and Risk at the Ministry of Defence), and Commissioner Angela McLaren (City of London Police Commissioner and Cyber Lead at the National Police Chiefs’ Council).

“In my military job on behalf of the Defence, I’d like to thank TechTalent for signing the Armed Forces Covenant. It’s essential that we have the support of employers as we use and deploy Reserve talent, but not just Reserve talent.

“We’ve got veterans, we’ve got spouses of armed forces members, and we’ve got adult volunteers from the Cadets who give a huge amount of time, personal time. And it’s with your support, the employer community, that they can do that sort of service. So, this is important for the Defence of the nation, and I would like to thank all of you but in particular, TechTalent, for their support in the Armed Forces Covenant.”

“We are thrilled to have signed the Armed Forces Covenant.

“At TechTalent, we take great pride in being able to support the armed forces and signing the Armed Forces Covenant demonstrates our commitment to working side-by-side with those leaving the forces to equip them with new skillsets and match them with fantastic tech jobs.

“We’re seeing a huge industry demand for individuals trained in cyber security and we feel ex-military personnel and their families, with the assistance of our technical training and support solutions, are perfect candidates to meet this demand.”

Through its TechTalent Academy, the business provides these fully funded courses to people from a range of diverse backgrounds to equip them with the skills and certifications they need to kickstart their careers in tech. As well as cyber security the TechTalent Academy also delivers courses in data science, software development and cloud computing.

“It is a great pleasure to support TechTalent with their Armed Forces covenant and their journey on the Employer Recognition Scheme. Their support is already evident, and I look forward to seeing them become Gold Award holders.

“The support of employers is vital to Defence People objectives, including the recruitment and retention of Reservists, the employment of veterans and Service spouses/partners, and the Cadets movement.  Making a public pledge of support makes a statement to the Armed Forces community that they are valued by society and encourages other organisations to do the same.

“Employers can reap real rewards from employing military personnel such as Reservists and Service Leavers, acquiring a portfolio of skills and behaviours that are beneficial in a modern working environment.

The skills and training military personnel bring to civilian employers include nationally recognised business and technical qualifications, as well as desirable “softer” transferable skills such as leadership, team working, strategy and problem-solving, proven in challenging environments.”

Those who work with TechTalent as a result of its signing of the Armed Forces Covenant will benefit from the Attract, Train, Deploy model the organisation has developed. The model aims to connect organisations with tech specialists through a scalable and innovative hiring solution for organisations looking to access experienced tech talent.