During a G-Star conference in Busan, South Korea, Fumihiko Yasuda, president of Team Ninja, claims that he is working towards bringing fans some news as soon as possible. This is all coming according to Ruliweb (via Video Games Chronicle).


What’s particularly interesting is a slide that came at the tail end of Yasuda’s presentation. Above pictures of the Ninja Gaiden and Dead or Alive series, the words (in Japanese) say “The Future of Team Ninja – Reboot of popular series.”

Of course, it’s also worth noting that Wo Long: Fallen Dynasty and Rise of the Rōnin are slated for a 2023 and a 2024 release window respectively for Team Ninja. As such, it looks like Team Ninja will have a lot of work on their plates in the coming years.

Full-time development for Dead or Alive 6 began in December 2017 and was officially released worldwide in March 2019. Assuming that Team Ninja hasn’t begun development on anything just yet, this means that this rebooted Dead or Alive title might not release until 2024.

We’ll have to see how things play out for both the Dead or Alive and Ninja Gaiden series from here. 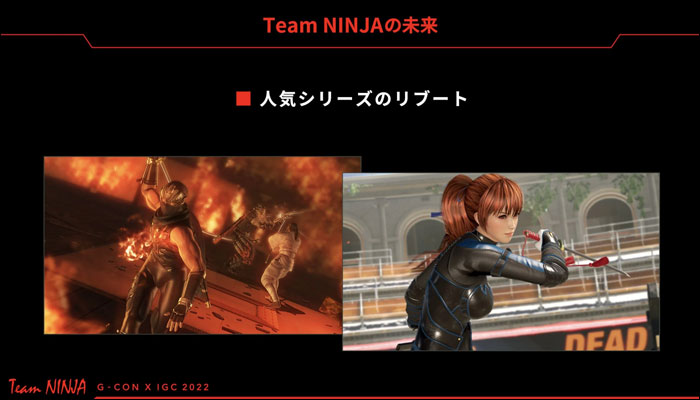