Calabar which literally means “come and live and be at peace,” has always been a society of serenity, peaceful people who take life easy and a home of culture and tourism.

Named one of the neatest cities in Nigeria, Calabar in the last 18 years has witnessed a rise in the number of visitors who come to catch a glimpse of the Calabar Carnival, Nigeria’s biggest street party.

However, in the last few years, this once serene environment has become a shadow of itself with huge refuse dumps and the rise of Vulnerable Children in Street Situations popularly known as “skolombo” for the boys.

“Skolombo” as they are popularly known in Calabar are boys from as young as 7 to as old as 21 years who live on the streets of Calabar, around Marian Road, Flour Mill, Cultural Centre and many other parts.

These homeless and vulnerable boys seen scavenging in the city’s refuse bins in rags also beg, gesturing to passersby by touching their tummies and their mouths, showing that they are hungry and in need of food.

The News Agency of Nigeria (NAN) went to some of the spots where these boys are found and spoke to some of them about how they ended up on the streets, their challenges and aspirations.

Around Marian Road, one of them, Felix Henshaw, a 20-year-old young adult, with a terrible scar on one side of his face and a massive sore on the heel of his right foot said he has been on the streets for 12 years. 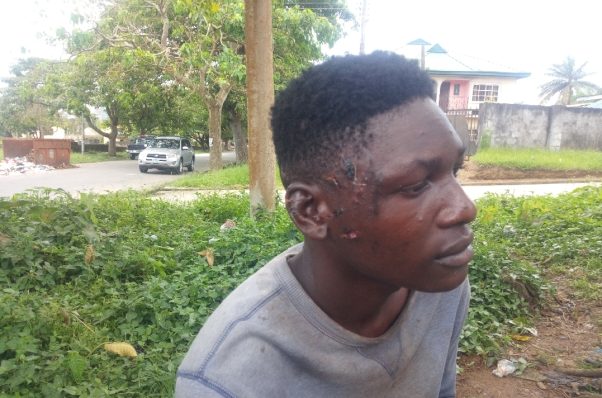 Felix Henshaw one of the street children in Calabar with broken bottle scars on one side of his face.

Henshaw said he left home in 2010 after writing his Common Entrance Examination but could not proceed to any secondary school or learn a trade because his father had no money.

“I scavenge for empty bottles and cartons that I sell to feed, that is how I got the wound on my leg, I stepped on a broken bottle in one of the refuse bins.

“The wound has refused to heal because it has not been treated, for the fresh scar on my face, I was stabbed with a broken bottle by a rival group from the Bogobri area that comes to forcefully collect money from us and I resisted.

“We are a small group here and I am their leader and try to protect them whenever we are threatened,” he said. 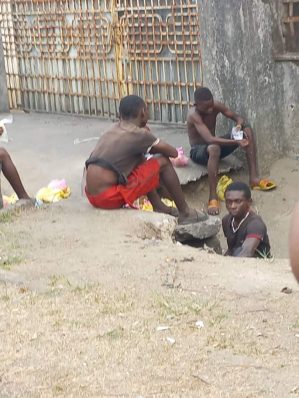 Similarly David Etim a member of the group who is 19 said he started living on the streets 8 years ago when he and his elder brother were driven from their home by their mother on the accusation that they were wizards according to her church.

“On the streets, my brother was hit by a vehicle and he died, since we have no one to help us we looked for somewhere dug the ground and buried him as we always did.

“The street is a hard place to survive in, we have no food, wear rags, nowhere to take our bath and we still have rival groups that attack us with weapons to collect proceeds of our scavenging and begging from us, he noted.

On his part Faith Sunday, a 13-year-old boy who begs on the premises of the Cultural Centre, said he had been living on the streets since 2018 after he was sent out of his aunt’s house for losing N500 given to him to keep.

The boys who all stank as they spoke to NAN because they had not taken their baths for days said all they needed was a place to live, sleep and something to do like a job or a skill. 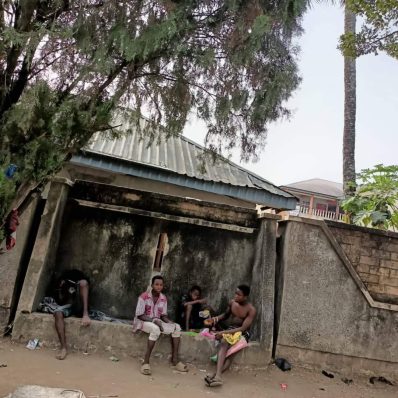 The United Nations General Assembly in November 1989 adopted the convention on the rights of the child (CRC).

In July 1990, the Organisation of African Union, (OAU), Assembly of Heads of States and Government adopted the African Union Charter on the Rights and Welfare of the Child (ACRWC).

The member states of OAU now African Union (AU) believed that the CRC did not adequately reflect sociocultural and economic realities peculiar to Africa and relevant in articulating the rights of the child.

Nigeria in 2003 enacted the Child Right Act in drawing from the provisions of the CRC and ACRWC, this same law was domesticated in Cross River in 2009 as A Law to Protect the Rights of a Child and for Other Related Matters.

However, despite these bogus international and local frameworks, the protection of children in the state has been totally ineffective or almost non-existent.

In 2009, Mrs Obioma Imoke, wife of Sen. Liyel Imoke, the then governor of Cross River founded the Destiny’s Child Centre in Calabar to provide shelter for vulnerable children.

The centre enrolled 201 children out of which 153 acquired formal education and 36 were trained in vocational skills.

However, like most government interventions, it died as the tenure of that administration elapsed in 2015 and many of these children returned to the streets of Calabar.

The response of the present administration of the state was the setting up of a security outfit comprising all the security agencies and code-named “Operation Skolombo” in 2015 to carry out punitive actions against these boys.

While this enhanced society’s negative perception of these kids, it did not address the issue of how children who are God’s blessings became products of the streets and how they survive daily.

Similarly, in 2018, the government of Cross River announced plans to rehabilitate over 1000 street children and established The Child Protection Commission.

The agency visited locations where street children clustered and made promises but nothing came out of it afterwards.

Mr James Ibor, Principal Counsel of Basic Right Counsel Initiative (BRCI) said as the challenge of Street Children in Vulnerable Situations grew, residents of Calabar blamed them for the growing insecurity in the city.

Ibor said BRCI publicly condemned the accusations and recommended ways to solve the problem in Calabar and this gave birth to a pilot programme that was largely successful.

He said for the first time, in 2018, BRCI in collaboration with The United Nations International Children Emergency Fund (UNICEF), Nigeria Bureau of Statistics (NBS), Cross River’s Ministry of Humanitarian Affairs and Social Welfare and others did a census of these children and discovered 317 of them.

“50 of these children were successfully camped for three weeks during which, they were taught livelihood skills, we conducted family tracing, counselling and built a foster care network for those we could not reintegrate with their families.

We also started advocacy against people and religious organisations whose actions were drivers of the menace but the pilot project, though largely successful, was discontinued because government institutions whose efforts BRCI ought to complement were poorly funded.

Similarly, Mrs Victoria Emmah-Emmah, Executive Director of Neighborhood Carewell Foundation said they have been working with street children for the last 22 years with support from the American Embassy, Global Affairs Canada and others.

Emmah-Emmah said they have the records of over 5,000 children they have supported in school because education was a key way of dealing with the issue of “skolombo” in the state.

According to her, the lack of sincerity and will from the government was a major challenge as there were no available shelters and programmes for these boys to be effectively rehabilitated.

Mr Ken Henshaw, Executive Director of We The People, an NGO in Cross River said the menace of “skolombo” started becoming a problem in Calabar around the year 2000 as religious houses which branded children as witches and wizards grew.

He said even though it was criminal to brand any child a witch or wizard according to Cross River’s Child Right Law, implementation of this law was a problem.

“In 2020, we published a detailed report of six months of investigation titled ‘Left to Die’ the story of Cross River’s street children, a 10 minutes documentary with the same title and launched a petition that got 3,800 signatures calling on the state government to take action based on the recommendations we gave.

“But as I speak to you nothing has been done by the state government, the problem is getting worse, these children are growing on the streets, many of them who were kids five to seven years ago are now teenagers,” he said.

He asserted that from the available data of 2018 out of over 300 street children discovered on the streets of Calabar only about 10 to 15 per cent are girls the rest are boys who scavenge for food like animals, are exposed to all sorts of drugs and even bury their dead colleagues.

He added that if nothing was done, in the nearest future, not just crimes but violent crimes committed not out of hunger but anger will increase because that is the only thing the society has taught these boys.

A few months ago, one of the popular street kids in Calabar, known as John was mobbed to death on the accusation of stealing, nobody including the police did anything about it because according to the residents of Calabar, these boys are criminals.

As a society, we must stop and ask what happened to the “skolombos” of yesterday who were children and are now adults in relation to the increase of violent crimes in Calabar.

Pretending that these boys don’t exist won’t solve the problem, the government needs to wake up to its responsibility of implementing the Child Right Law it domesticated in 2009 and positively empowering the already existing street children.

While Civil Society Organisations and all well-meaning residents of Calabar should support in advocating for responsible parenting. The time to act is now.