Sinead O’Connor has been admitted to the hospital after she dropped a suicidal post just days after her 17-year-old son took his own life.

The 55-year-old  Irish singer revealed last night she was with the police and being taken to see medics in a heartbreaking Twitter post.

The singer said she feels ‘lost’ and ‘hates’ herself without Shane, who took his own life last week after escaping hospital while on suicide watch.

In another tweet, the singer said she’s decided to follow her son.and that rhere is no point living without him

She wrote online after another tweet: ‘I’m sorry. I shouldn’t have said that. I am with cops now on way to hospital.

‘I’m sorry I upset everyone. I am lost without my kid and I hate myself. Hospital will help a while.’

“I’ve decided to follow my son. There is no point living without him. Everything I touch, I ruin. I only stayed for him. And now he’s gone. I’ve destroyed my family. My kids don’t want to know me. I am a shit person. And you all only think I’m nice because I can sing. I’m not.” 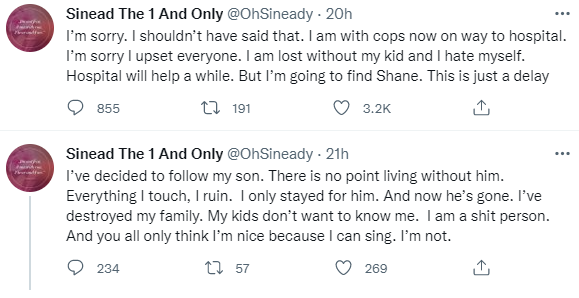 O’Connor has been making a series of tweets his the sad death of her son. She alleged her child was discharged from Child and Adolescent Mental Health Services just one month before his death despite making ‘detailed funeral plans’.

She slammed CAHMS, the child and family agency Tusla, and the Irish state for ‘failing’ Shane who hanged himself.

She wrote: ‘Please don’t imagine I am less than keenly aware I failed my child, alongside Tusla and the HSE and the Irish State. We all failed him. Welcome to Ireland. Suicide will not bring you peace. It is a lie.

‘Therefore the next poor well-meaning sod who says to me about my son ‘at least he is at peace now’ is going to get their lights punched out. How does anyone knows he’s at peace?

She added: ‘I can tell you his face was as tormented as it’s been for months. No difference at all.’

O’Connor went on to rant against Tusla, promising retribution for her son’s death and alleging a CAMHS psychiatrist said ‘planning a wedding is no different to planning a funeral’ upon her son being discharged, despite him having left ‘detailed funeral plans’.

She wrote: ‘Message to Tusla, a storm is coming that you haven’t rehearsed for. Kids are dying in your care every day. Now my kid is one of them. Big mistake.

‘My child has now been dead on Tusla’s watch for over 48 hours and the only contact I have had from anyone representing Tusla was yesterday from their media office, concerned for themselves over the negative publicity.

‘A month ago Shane was brought to CAMHS after vanishing leaving suicide notes including detailed funeral plans. They discharged him. Said he had no plans.

‘That was the CAMHS psychiatrist… I’m here to tell CAMHS that planning my child’s funeral is nothing remotely similar to planning his wedding. Which will now never happen. Because you’re unfit for purpose.’

The Irish singer alleged her son said he learned how to make the noose he used on the computer in the child’s psychiatric ward at Linn Dara hospital.

O’Connor wrote on January 8: ‘I have now formally identified the remains of my son, Shane. May God forgive the Irish State for I never will.

‘Now Tusla want to discuss with me ”a media release” no doubt wishing to have me join in their efforts to make this death of my child seem like it wasn’t at the hands of the Irish State.

‘Tusla and HSE to release a dishonest statement in response to international questioning. A load of lies, refusals to accept responsibility.

‘Couched as always in the omnipotent and false concern they claim to have for the privacy of the children who die on their watch.

‘I’m going to take private time now to grieve my son. When I am ready I will be telling exactly how the Irish State in the ignorant, evil, self-serving, lying forms of Tusla and the HSE enabled and facilitated his death. Magdalene Ireland never went away. Ask the youth.

‘And any statement out of Tusla suggesting they a) did their best b) care or c) have deepest sympathies for anyone here but their lawyers, is a load of crap trap that has killed too many kids and it isn’t going to wash this time. Too many kids are dying on Tusla’s watch.’

Police last week released the final photograph of Shane before his death.

He was seen wearing a black hoodie with a colourful print design, dark tracksuit bottoms, a plum coloured T-shirt, and white trainers.

O’Connor, who changed her name to Shuhada’ Davitt in 2018, paid tribute to her ‘beautiful’ son on Saturday.

In a tweet, she wrote: ‘My beautiful son, Nevi’im Nesta Ali Shane O’Connor, the very light of my life, decided to end his earthly struggle today and is now with God.

‘May he rest in peace and may no one follow his example. My baby. I love you so much. Please be at peace:’

Shane was one of O’Connor’s four children, along with Jake Reynolds, Roisin Waters and Yeshua Francis Neil Bonadio.