According to the Holy Bible, the Church is not a building but a gathering (call out) of believers. However, some still believe the building is the church and that is where God is.

Many will decorate the church building even to surpass heaven (though, no one has seen the heaven before), others will behave like best and dress and act like angels while inside the church – meanwhile, they are something entirely different outside.

The Skull chapel or St. Bartholomew’s Church, is an ossuary chapel located in the Czermna district of Kudowa, a town in Klodzko County, Lower Silesia, Poland. Built in last quarter of the 18th century on the border of the then Prussian County of Glattz, the temple serves as a mass grave with thousands of skulls and skeletal remains “adorning” its interior walls as well as floor, ceiling and foundations. The Skull Chapel is the only such monument in Poland, and one of six in Europe.

According to findings, the chapel was built in 1776 by local parish priest Václav Tomášek. It is the mass grave of people who died during the thirty years war (1618–1648), three Silesian wars (1740–1763), as well as of people who died because of cholera epidemics, plague, and hunger. 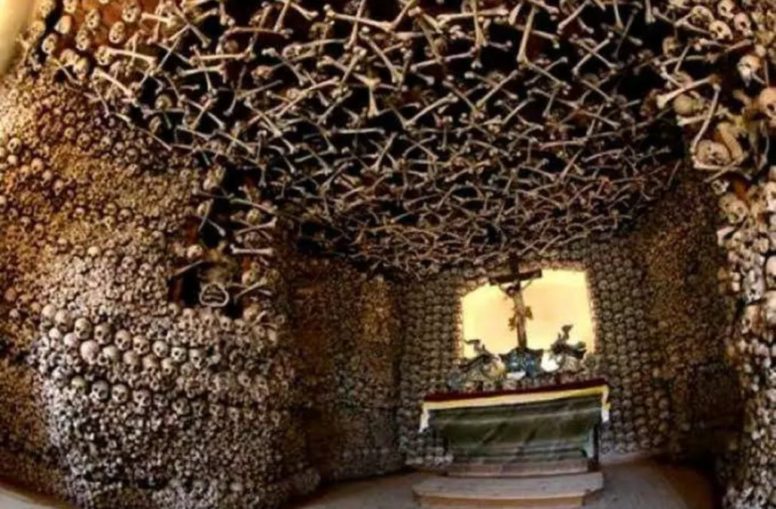 Together with sacristan J. Schmidt and grave digger J. Langer, father Tomášek who was inspired by the Capuchin cemetery while on a pilgrimage to Rome collected the casualties’ bones, cleaned and put them in the chapel within 18 years (from 1776 to 1794).

Walls of this small, church are filled with three thousand skulls, and there are also bones of another 21 thousand people interred in the basement. The skulls of people who built the chapel, including Tomášek, were placed in the center of the building and on the altar in 1804.

Inside are a crucifix and two carvings of angels, one with a Latin inscription that reads “Arise from the Dead” are among the bones. A recording inside the church available in three languages explains the history of the chapel.