Seal of Approval for Plastering Team at NPTC Group of Colleges 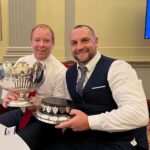 A first-class reputation for delivering first-class training in plastering skills has been sealed as NPTC Group of Colleges was named College/Training Provider of the Year at the Training Awards 2022.

The awards, which took place in London, recognise achievement and excellence in plastering and interior systems and are a collaboration between the Finishes and Interiors Sector (FIS) and The Worshipful Company of Plaisterers.

As well as being awarded the accolade of College/Training Provider of the Year, apprentice Jonathan Donaldson came top of the class and was named Apprentice of the Year (plastering).  Jonathan, progressed through College from Level one to Level three, expanding his skills and techniques. He also qualified for the UK SkillBuild finals and is carrying on along his path to success.

The judges said: “Jonathan demonstrated the highest level of achievement through training and is a credit to his tutors.”

This year’s entry was supported by others including Alistair Donaldson who trained at the College in 1996. He points to the ‘outstanding success in qualifying apprentices’. He now runs his own plastering company and has sent its six apprentices to the College and ‘applauds the communication skills of the teaching staff. Cyfle Building Skills has also worked with the College for 10 years, recruiting plastering apprentices and it now runs a successful work experience project with the College, giving students the site experience plus a basic tool kit.

Lecturer Daniel Meredith said he was delighted with the awards and said: “It’s fantastic recognition of the hard work and dedication of the plastering team in College and also the students who are keen to progress.”

Ian Lumsdaine, Director of Study at the College said: “To be recognised as the Best Performing Large Provider of Plastering in the UK again is a fantastic achievement and testimony to the hard work and enthusiasm of the plastering staff at the College. Staff remain committed to the success of their students and to also receive recognition for the Best Plastering Apprentice in the UK highlights the dedication and inspiration that they provide to students studying the craft at the College.

“We are all hugely proud of the outstanding success that our staff and students have achieved at this year’s awards and the high-quality learning experience that is enjoyed on a daily basis.”