The upcoming Samsung Galaxy A54 5G smartphone has been spotted on the Bluetooth SIG certification website ahead of its official unveiling.

Samsung is reportedly prepping to launch a new Galaxy A 54-series smartphone. A new report claims the Galaxy A74 isn’t likely to see the light of day.

There’s still a lack of official confirmation. Yet, the Galaxy A54 5G is reportedly headed to the market soon. The handset’s specifications and features aren’t a mystery.

Now, the Samsung Galaxy A54 5G has appeared on the Bluetooth SIG certification website. This Bluetooth SIG listing is a significant sign that the Galaxy A-series phone will go official soon.

The Galaxy A54 passed through the Geekbench benchmarking website along with the Galaxy F04s earlier this month.

Moreover, the certification website confirms the 5G-ready phone has model number SM-A546V. Aside from this, the listing confirms the device’s official moniker.

The Bluetooth SIG certification reveals that the Galaxy A54 will support Bluetooth 5.3 connectivity. The handset will pack a Samsung Exynos processor under the hood. 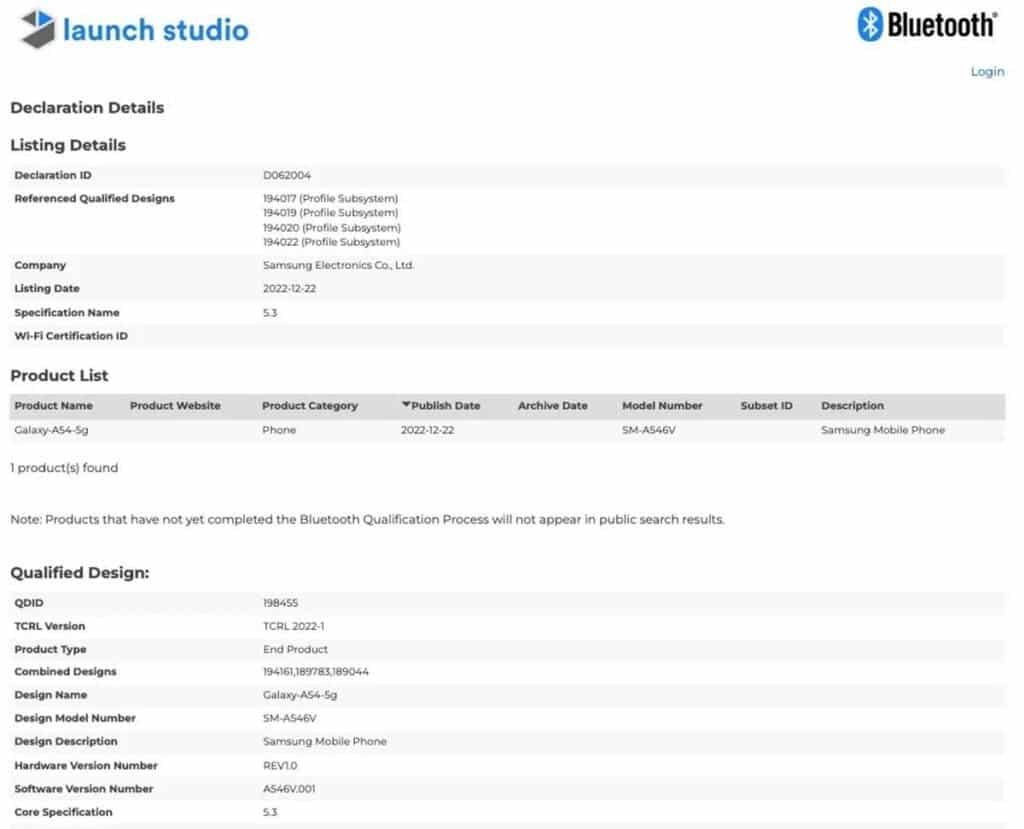 According to the Geekbench site, this processor has the codename s5e8835. Also, the handset will ship with 6GB of RAM and offer ample 128GB of internal storage.

The A54 5G gained 776 and 2599 points in the single-core and multi-core Geekbench tests, respectively. Also, the handset will boot Android 13 with One UI 5.0 on top.

The Galaxy A-series phone will house three cameras on the back. The phone’s design renders have recently leaked online.

It will sport a flat screen with thin bezels around it. The rear panel has three circular camera cutouts and an LED flash. The right spine houses the power and volume buttons. Likewise, the bottom edge accommodates the USB Type-C port.

It also has a speaker grille and a microphone. The phone will reportedly pack a 5100mAh battery to keep the lights on. A 50MP main camera sensor could be in the offing.