It’s time to turn weapons into tools and for the bloodshed on the Ukrainian soil to end, says the bishop of the Russian border city of Belgorod, where a group of explosions killed four and destroyed 50 buildings on Sunday.

Among the victims were people who had fled the war in Ukraine, says His Eminence Metropolitan John of Belgorod. The city sits just 25 miles north of the Ukrainian border.

Tonight, rocks of the Armed Forces of Ukraine hit sleeping residents of Belgorod in their residential neighborhoods. Among the dead were residents of the Kharkov Province, who came here to take refuge from the war in peaceful Belgorod. However, no one knows the day or hour when our earthly life will end; no one knows when it will happen (Mt. 24:36-39). We call for increased prayer for the repose of the deceased and for the recovery of the injured, for an end to the bloodshed that’s taking place on Ukrainian soil, but today has come to our homes.

It’s time, according to the word of Holy Scripture, to beat swords into plowshares (Is. 2:4). May the Lord preserve all the living and grant peace on Earth.

The Belgorod Diocese has been helping refugees from Donetsk and Lugansk since before the war began, with its own headquarters and multiple centers dedicated specifically to that task.

In an interview in June, Met. John spoke about the clergy’s prayers for peace and reconciliation:

It happens that when I’m celebrating a Divine service, on my right is a batiushka whose son serves in the Russian Airborne Forces. And on my left, batiushka is a native of Ukraine, and his son was drafted into the Ukrainian Armed Forces. We all pray for peace to come and we serve for reconciliation. What exactly this peace will be, whether the path to it will be diplomatic or some other way, is up to the professionals to decide.

But I would like the bloodshed to stop faster, when innocent people are dying. Everything depends on the enlightenment of the people who are responsible for it. 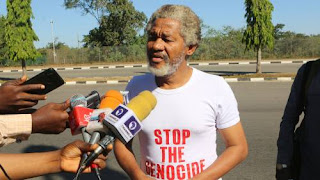