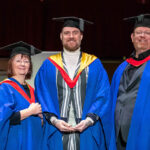 Two former Bradford College students received the highest title that the institution can bestow at the 2022 graduation ceremony at St George’s Hall, Bradford.

The Honorary Fellow Awards were first initiated by Bradford College in 1933 and are given to inspirational individuals distinguished by their outstanding contribution to their fields, the College, or the City of Bradford.

Chief Executive Bana Gora received the Award for over 20 years of supporting women’s rights in the city and beyond. Bana is a former Bradford College BTEC National Business Studies student who co-founded the Muslim Women’s Council in 2009 – an independent charity based in Bradford.

In 2015, Bana hit the headlines when she announced the intention to build the UK’s first female-led mosque. The hope is for the mosque to become a community hub, offering advice and symbolising inclusion for all women.

Bana is involved with social policy and community engagement on a local and national level, working directly with ethnically and religiously diverse communities and marginalised groups. Bana also founded a weekly food initiative called the Curry Circle, which supports the homeless and those in need.

In 2019, Vogue announced Bana as one of the top 25 women shaping Britain’s future alongside names such as Naomi Campbell and Phoebe Waller-Bridge. In addition, Bana was the first Muslim woman to receive the Peacemaker Award in 2021 and has inspired many women with messages of empowerment. Acclaimed photographer and former student Neil Bedford also received the Honorary Fellow title for his distinguished career and inspiring a generation of young creatives.  Neilbegan his academic journey at Bradford School of Art in 2003 when he studied for a National Diploma in Fashion. Neil’s early interests in imagery and identity were rooted in Bradford and a fascination with branding, logos, football, and streetwear.

Neil progressed to higher education, gaining a first-class BA (Hons) degree in Fashion Photography before being awarded a Master’s degree distinction at the renowned London College of Fashion. Neil then embarked on an impressive portrait, fashion, sport, and music photography career.

Over the last 12 years, Neil has been commissioned by global brands, including Nike, adidas, Paul Smith, Burberry, The Telegraph, GQ Magazine, Apple, and Sony Music. Neil’s portraits include some of the most well-known athletes, musicians, and actors of our times, such as Pharrell Williams, Liam Gallagher, Kobe Bryant, Ed Sheeran, George Ezra, Eric Cantona, Emma Raducanu, and David Beckham.

Alongside his photography, Neil co-runs two artists’ retreats in Saltburn-by-the-Sea for aspiring artists who benefit from mentoring and time away from their creative practices. In his touching speech, Neil paid tribute to his former Bradford School of Art tutor, Angela Loftus. Neil said:

“When I met Angela, I felt like I suddenly had someone who completely understood me and also saw my real potential, pushing me every time to do more and be more.  She had the knowledge I craved and the industry experience to back it up. Without people like her, there wouldn’t be people like me, out there, doing what we love – so thank you.”

The Honorary Fellow Awards were given shortly before hundreds of Bradford College students participated in two graduation ceremonies. In the morning, degrees, higher professional, and technical qualifications were awarded by the Schools of Engineering & Construction, Bradford School of Art, Science, Medi-tech, Allied Health and Computing, and Business, Accountancy & Law.

In the afternoon, the Bradford College Margaret McMillan School of Education and School of Social Care & Community Practice also recognised the achievements of their exceptional graduands.

Bradford College Principal & CEO, Chris Webb, said:
“Many of you have overcome unique challenges on your journey toward completing your qualification, often managing competing demands in your life such as family commitment or work, which makes your success even more remarkable.

“Today’s ceremony marks a new beginning for you – whether it’s into a graduate career, further study or incredible new opportunities. We hope that you take with you very special memories of the College and the city of Bradford […] You are now a Bradford College Alumni, joining a family of graduates who have all gone on to remarkable success in life, this is just the beginning. Congratulations to you all.”