The family of rapper Drakeo the Ruler will file a wrongful death and negligence lawsuit against promoters of the “Once Upon A Time in LA” festival, The Associated Press reported.

In a news conference Thursday, the rapper’s family, along with their attorneys, said a lack of security allowed dozens of men to ambush him backstage at the event.

Drakeo the Ruler, whose real name is Darrell Caldwell, was stabbed to death last month while he waiting to perform his set at the music festival in Los Angeles’s Exposition Park.

The family played a video at the news conference of the moments leading up to the stabbing, according to the AP. The video showed men in red pouring into the fenced-off backstage area and attacking Caldwell and his small entourage.

The attorneys called the killing a “targeted assassination,” per the wire service.

“Mr. Caldwell was lynched by 40 to 60 people,” attorney James Bryant said at the news conference, according to the AP. “This would never have happened if those promoters had the proper security protocol. The world lost an amazing artist, a beautiful human being, a father.”

The attorneys said they will file a wrongful death and negligence lawsuit against the festival’s promoters, which include Live Nation and Bobby Dee Presents, on Monday, the AP reported.

Live Nation faced backlash following the Houston, Texas, Astroworld music festival in November, for which it was also a promoter. Ten concertgoers were killed and hundreds of others others were injured in a crowd surge during a performance by rapper Travis Scott at that festival.

Authorities said they are investigating Caldwell’s killing, but no arrests have been made and no suspects have been publicly identified since his stabbing, the AP noted. 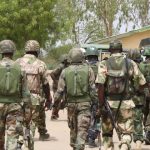