A message allegedly emailed to an anarchist blog by a pro-abortion terrorist group has claimed credit for the attack of two pro-life pregnancy centers in the area of Detroit, Michigan, but only published evidence of one of the centers attacked at the Abolition Media Blog, which claims online to be a “tool for movements dedicated to anarchist, abolitionist, and revolutionary perspectives.”

The image allegedly taken June 19, 2022, the night of the attack, shows just the Lennon Pregnancy Center in Dearborn Heights spray painted with message, “If abortions isn’t safe, neither are you!” This threat matches other messages left by Jane’s Revenge, a pro-abortion terrorist group that has threatened to ramp up violence in the wake of a possible overturn of the 1973 Roe v. Wade Supreme Court case.

Abolition Media, which has been used multiple times to send out messages by Jane’s Revenge, titled the post, “Fake Clinic Attacked in Detroit“, where they relayed a message emailed to the blog by the perpetrators. It read, “On the night of 6/19 a gang of criminal queers smashed the windows of two fake abortion clinics in the greater Detroit area leaving the messages ‘if abortion isn’t safe, neither are you’ and ‘fake clinic.’ Jane will have her revenge.” 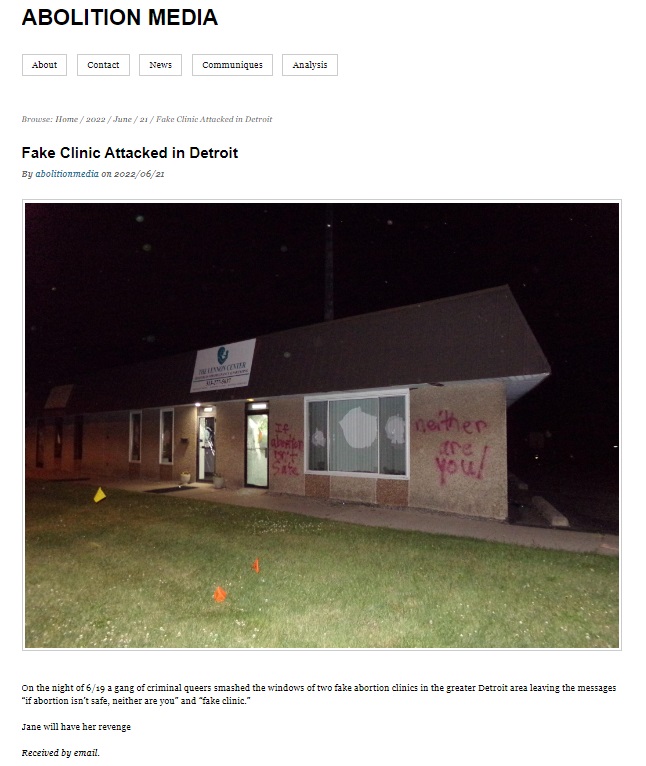 The following morning, Michigan pro-life activist Lynn Mills also reported the attack, writing on her Facebook page, “Please consider helping the Lennon Center in Dearborn Heights as they are the latest target of Abortion hate. You know, the ‘kind’ left. Sometime in the early morning cowards attacked their building tagged it in two spots and broke every window.”

Mills uploaded additional images documenting how these violent abortion extremists broke out all the windows, likely a very costly repair. On Facebook, the pregnancy center announced that they would be closed for one day but did not publicly mention the attack. 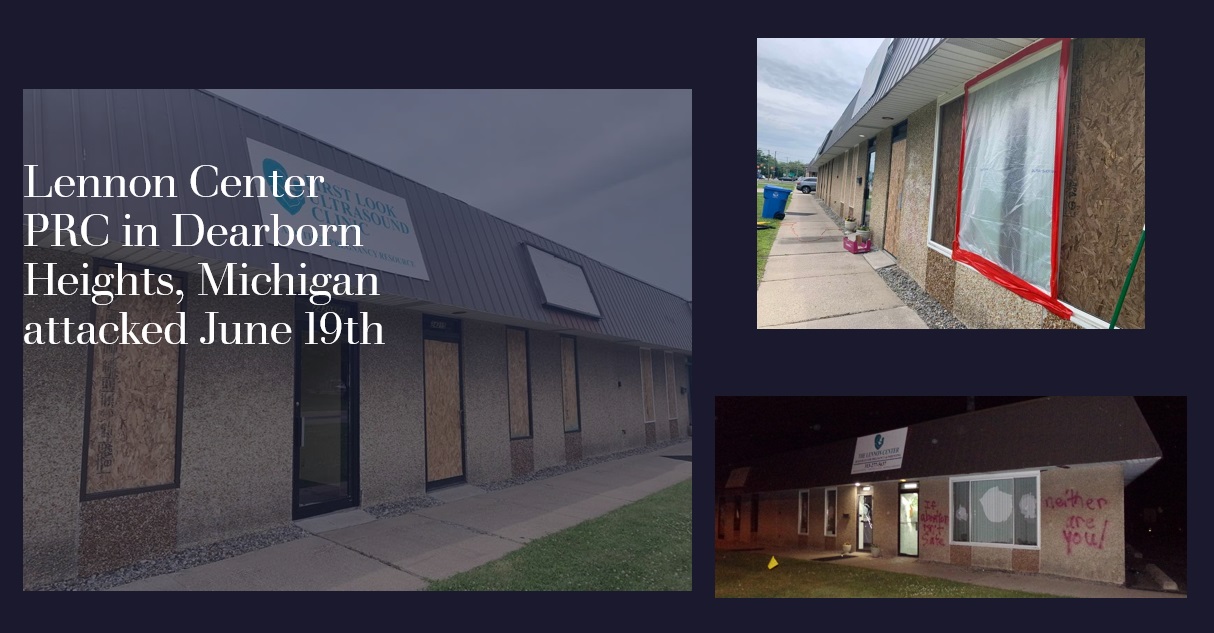 Gary Hillebrand, Board of Directors president for the Lennon Center, told Live Action News that the pro-abortion attackers broke 11 windows and three glass doors while they spray painted their threat on the building. Hillebrand said that the PRC notified the police and plan to also notify the FBI.

“I feel bad for all the people who donate money, food, and time here that some of that has to go to cleaning things up,” Hillebrand told the Detroit NBC affiliate.“I think it’s all related to Roe v. Wade coming down from the Supreme Court. A lot of people are upset about that and taking it out oddly enough on people like us who are trying to help the ladies who are pregnant and need help.”

But Hillebrand told Live Action News that the center will remain available to help those in need. “Our clients expect our help and they will get it. This isn’t affecting what we do; we’re going to keep going,” he said.

Dearborn Heights Detective, Lt. Mike Guzowski, told Live Action News that they have no word yet on a second center attacked in their city. Live Action News will update as soon as we learn more.

Federal response to violent attacks has been weak

Kyle Shideler, Director and Senior Analyst for Homeland Security and Counterterrorism at the Center for Security Policy, is disturbed at the way federal authorities have handled the litany of pro-abortion attacks thus far and claims groups like Jane’s Revenge and others targeting pro-life centers should be “viewed through the lens of terrorism.”

In an interview with “EWTN World Over,” Shideler explained that terrorism has two purposes. “One, to intimidate an arm of the government — that is to say, the Supreme Court — and prevent it from making a rule on the Dobbs case that would be seen as favorable to the pro-life position,” Shideler said. “And then, two, to intimidate the public, members of the pro-life movement. And, to disrupt their ability to organize at the state and local level.”

“So, these attackers are making the statement that they will escalate violence if the government does not do what they wish. And that is terrorism by definition,” he emphasized.

The continued attacks on pro-life centers, coupled with virtual silence from federal authorities, has caused alarm among pro-life organizations, faith leaders, and politicians — prompting multiple urgent requests to the Department of Justice and Attorney General Merrick Garland to investigate and prosecute the perpetrators.

As a result, the FBI announced late last week that it planned to investigate the increased attacks, asking anyone with information about any of the attacks to contact local law enforcement, their local FBI field office, or report at tips.fbi.gov.

Editor’s Note: This post will be updated as needed. 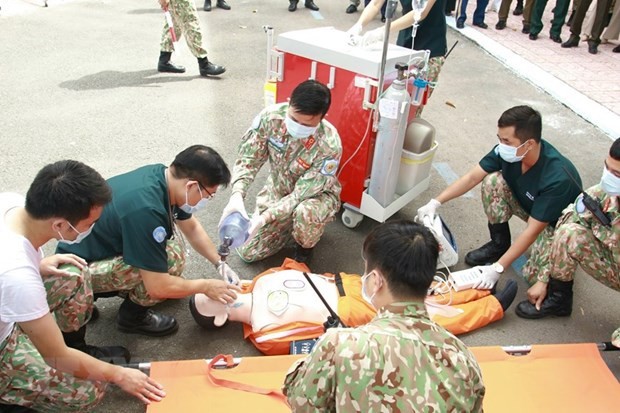