The Ebonyi State Police Command on Friday said it has rescued over 32 females and boys, who are mainly between 16 to 17 years from traffickers who allegedly dumped them in a two-room apartment located at Okposi Umuaghara, Ezza North Local Government Area of Ebonyi State.

The Commissioner of Police, CP. Aliyu Garba, made this known while parading the suspected traffickers alongside the victims at the B Division of the Nigeria Police Force located at Kpiri-Kpiri area in Abakaliki, the state capital.

Garba, who was represented by the state Police Public Relations Officer, PPRO, DSP Loveth Odah, said the activities of some unscrupulous criminal elements in the state are worrisome.

He noted that the suspected traffickers allegedly trafficked the chicken from different parts of the country for forced labour and sexual exploitations.

The commissioner noted that the victims were rescued following a case of a missing minor that was reported to the police by one Mrs Nwankwo Ijioma who hails from Uterufie village in Ebonyi LGA, who said her daughter, one Miss Nwankwo Childera, aged 14, who left their house in August 2021 had not been seen since.

Garba noted further that: “in the cause of investigation, a company’s advertisement sheet captioned ‘NEO life’ containing a phone number was found in the daughter’s room. The owner of the phone, who was later identified as Christian Nwankwo ‘M’ age 19 yrs, was trailed and arrested.”

The commissioner said that the suspects; One Nwagboduhu Ekene ‘M’ age 20yrs, and Nwaoko Godwin ‘M’ 24yrs and one other was arrested alongside the 32 trafficked underaged children at their hideout at Okposi Umuaghara.

“The children are trafficked from different parts of the country and are being used for forced labour and sexual exploitations, in the name of networking/ Hawking NEO life company products.

“The suspects rented two (2) rooms apartment at Diamond Villa lodge adjacent to Ebonyi state University Medical Department PRESCO campus, as a place of aboard for the victims,” he stated. 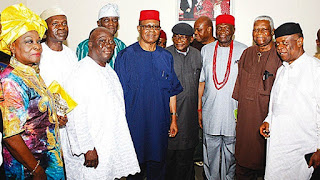