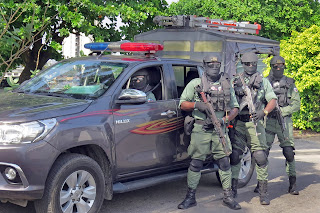 A middle-aged man suspected to be a terrorist in turban was arrested on Sunday at Arch-Angel Rapheal Catholic Church at Police Barracks, Garki, Abuja.

An eyewitness in a video said that commotion started in the church when the suspect who was in a turban and a police branded cap and faded military uniform suddenly drove into the church in a white Peugeot 406 car, claiming he was looking for his friend.

According to the eyewitness who did not mention her name in the video, when the worshippers raised an alarm and the young man was arrested, he claimed that he came from Abia State in the Southeast region of Nigeria but when he was asked the exact place he came from in the state, he could not say it.

He was eventually handed over to the police for further investigation.

“He dressed up, turbanned his face, wore a police ‘face’ (baseball) cap and wore a dark shade. We started asking him to stop but he drove to where the men were having a meeting. We started shouting for people to come out and stop and they stopped him.

“He said that he was here to see somebody. So, they always have a pointer in the church. The guy came and said he (the suspect) was not his friend and that he doesn’t even know him from anywhere.”

According to the speaker, after much interrogation, he said he is from Abia State but when they asked him where in Abia, he could not say, rather, he said he was looking for one of his relations in the police barracks who was working with the Inspector General (IG). They had to call the FCT police spokesperson.

“I am videoing his car with drugs and everything. It is happening on July 3, 2022. It is like Catholic churches are their target. Please let us tighten our security belt. The boy is now in the police station in Garki here,” she said.

When contacted, the FCT Abuja Police Public Relations Officer, DSP Josephine Adeh, who confirmed the arrest of the suspect told SaharaReporters that no incriminating items were found on the young man yet, but further investigation was ongoing.

The police spokesperson said, “A middle-aged man was accosted by some of the worshippers after the mass, while the men’s fellowship was holding a meeting.

“The main object of suspicion was his dressing and the manner in which he drove in. Preliminary investigation however shows he had just returned to the country and had come into the barracks to seek an old friend whose address he cannot clearly remember.

“The church was not attacked, no arm or prohibited item was recovered in his possession except for a ‘face’ cap customized ‘Police’ which is neither an approved kit nor an accoutrement in the police dress order. He was also wearing a faded suspected US Army Fashion type camouflage trouser.

“Though fear and panic erupted due to recent happenings in some parts of the country, normalcy was immediately restored to the situation as the police were on the ground to swing into action.

“While the investigation continues, members of the public are urged to go about their lawful duties without fear or apprehension. Once again, we advise the good people of the Territory to eschew the habit of promulgating news blown out of proportion or outrightly fake in narration. We shall continue to ensure that the FCT remains safe and peaceful for all and sundry.”

There have been a series of attacks on Catholic churches and priests. For instance, on June 5, 2022, some terrorists attacked St. Francis Catholic Church, Owo in Ondo where no fewer than 40 worshippers were killed.

Many Catholic Church priests have also been kidnapped with some killed while some including two kidnapped priests in Edo State are still in their abductors’ den.