The Pentagon must step up its efforts to track and publicly report on civilians hurt and killed by U.S. military operations, according to an unreleased draft of the 2023 defense spending bill.

The Defense Department must establish a Commission on Civilian Harm and do more to mitigate the impact of civilian casualties, according to a draft version of the National Defense Authorization Act, or NDAA, for Fiscal Year 2023 obtained by The Intercept. The so-called chairman’s mark — House Armed Services Committee Chair Adam Smith’s version of the NDAA — contains legislation and funding recommendations that must still be considered, debated, and voted on. The House Armed Services Committee is slated to consider Smith’s draft of the bill and offer amendments later this week.

“These proposals reflect that after 20 years, the accumulation of reports — by you, by the New York Times, the excruciating reporting on the strike in Kabul last year — led Congress to a tipping point where they felt the need to legislate in order to better understand civilian harm and to do something about it,” Brian Finucane, a senior adviser at the International Crisis Group and former legal adviser to the State Department, told The Intercept.

While the civilian harm measures in the markup appear to constitute a major improvement, especially the requirement to set up the Commission and substantive changes to the Defense Department’s annual civilian casualty report, known colloquially as Section 1057, experts say they still fall short. There is also, they note, no guarantee that the measures will make it to the final version of the NDAA.

“It’s a good improvement, but we wish it went further,” said a Democratic congressional staffer familiar with the document. “We are pleased with the 1057 changes and the COE and Commission on Civilian Harm, and really hope those pieces stay in.”

The draft bill, which was shared with The Intercept prior to its public release this week, contains elements of directives set forth in Defense Secretary Lloyd Austin’s January memo directing subordinates to draw up a “Civilian Harm Mitigation and Response Action Plan” that has yet to be released. The chairman’s mark also bears the imprint of legislation to overhaul the Pentagon’s civilian harm prevention,… 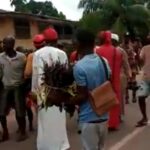