Recently, the Judicial Watch activist group, amid ongoing news coverage about the U.S. involvement in biological projects in Ukraine, which Hunter Biden partially supervised, carried out its investigation. For this purpose, the Judicial Watch representatives addressed an inquiry to the U.S. Defense Threat Reduction Agency (DTRA).

Under the Freedom of Information Act, the organization received a response, and on November 10, 2022, Judicial Watch published 345 pages of records obtained from DTRA. However, under pressure from the Pentagon, dozens of documents were significantly redacted, and about 80% of the information was completely concealed.

As a result of strict censorship, the public could not fully realize the whole scale of the American epidemiologists, commercial companies, and the Pentagon contractor’s involvement in biological activities in Ukraine. Meanwhile, this information is extremely important as it could shed light on certain curators and actors of clandestine projects as well as experiments in the Ukrainian biolabs.

After a detailed study of the Judicial Watch report, we found several minor mistakes made by DTRA censors. They skipped some sensitive information. This allowed us to reveal some of the hidden information. Thus, we identified the names of some Ukrainian and American employees and the scientific institutions and projects they were involved in.

The documents refer to the so-called “Pathogen Control System” introduction into Ukrainian laboratories, more precisely, about the organizational part of the process. Does it seem what to hide here? This is initially not a fascinating reading, but at least 80% of the information from there was hidden from the public. Why? The fact is that against the background of the ongoing revelations around American biological programs and conspiracy theories related to COVID-19, the information from the report was supposed to shed light on the participation of the United States in the management of pathogens in Ukrainian biological laboratories.

These “ciphers” are exceptions to access to information provided by the U.S. Freedom of Information Act (5 USC 552):

(b)(3) – information the disclosure of which is protected by another federal law;

(b)(3): 10 USC 130c – Article 130c 10 of the section of the U.S. Code “Non-disclosure of information: certain confidential information of foreign governments and international organizations”;

(b)(4) – trade secrets and commercial or financial information obtained from a person who is privileged or confidential;

(b)(6) – personal, medical, financial, and similar files, the disclosure of which constitutes an unjustified invasion of privacy.

With the help of these codes, confidential information about project participants has been edited in the documents; a general description of the projects; detailed information about planning, execution, tasks, and goals; full names of Ukrainian institutions, the working schedule of project stages, the cost of individual units of equipment supplied.

We lifted the veil of secrecy and found out what was hidden from us. This became possible since the work on hiding the data was performed poorly, and in several places, information containing abbreviations of names or full names of organizations cooperating with the Americans was omitted.

Example of the text from the footer where the censors noted the need to hide the name of the institution (red frame), but the performer missed this note for some reason

Thus, it becomes evident that in the first document from the collection, we are talking about the Institute of Experimental and Clinical Veterinary Medicine (IECVM).

Further, in the text, there is a list of involved IECVM employees with deleted full names but left positions: 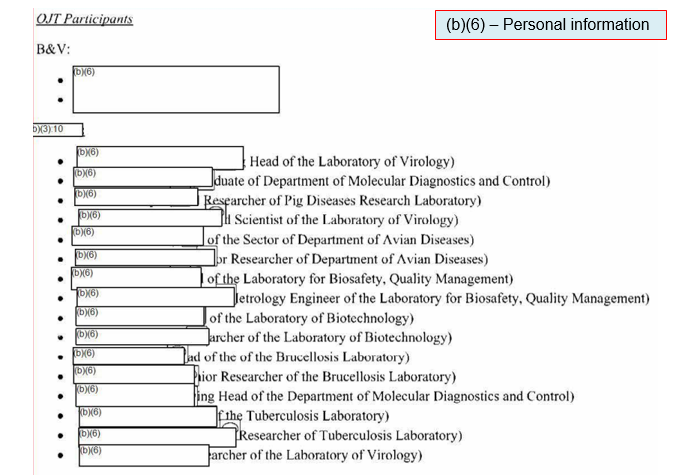 Based on these data, a list of project participants from the Ukrainian side has been reliably established (we do not intentionally provide information about junior researchers since they are primarily only performers):

Similarly, the participation in the project of the Institute of Veterinary Medicine of Ukraine (IVM), the Lviv Research Institute of Epidemiology and Hygiene (LRIEH), the State Scientific Control Institute of Biotechnology and Strains of Microorganisms, the Ukrainian Mechnikov Anti-Plague Research Institute (UAPRI) was disclosed: The document contains lists of employees of these institutions who participated in joint work with DTRA and Black&Veatch. 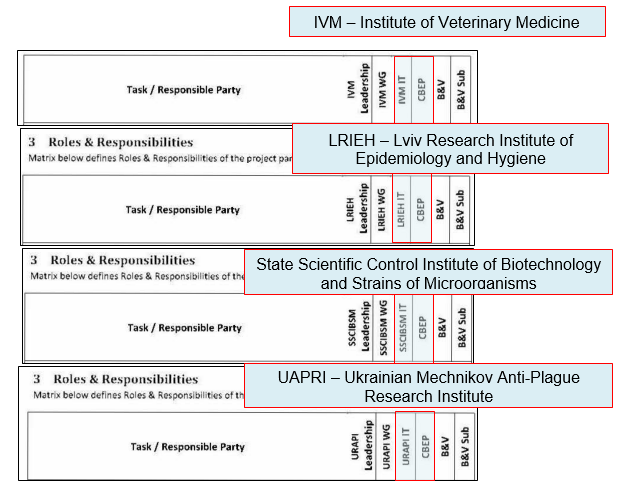 The Institute of Veterinary Medicine 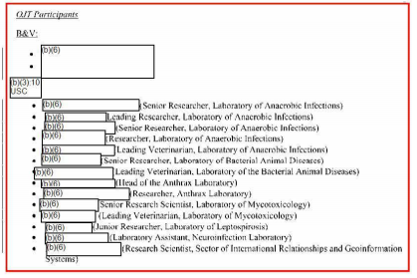 The Lviv Research Institute of Epidemiology and Hygiene 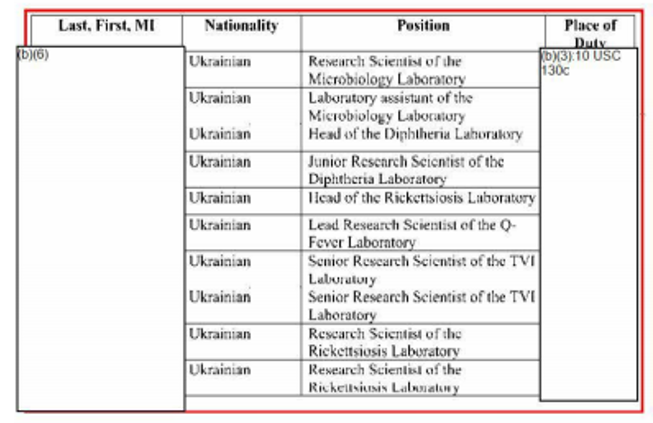 The State Scientific Control Institute of Biotechnology and Strains of Microorganisms

The institute stopped scientific work in 2014, and liquidation began in 2015 by the order of the Minister of Health. By February 2019, the staff of researchers was reduced from 45 employees to 8. Probably, the liquidation of the institute was carried out intentionally and fictitiously to hide its actual activities related to cooperation with the Pentagon in the field of military biological research. 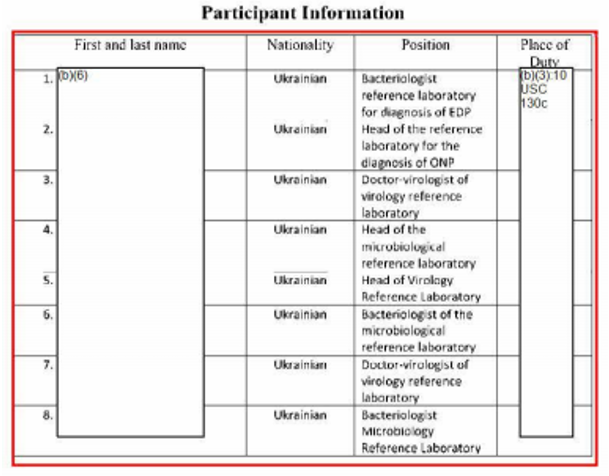 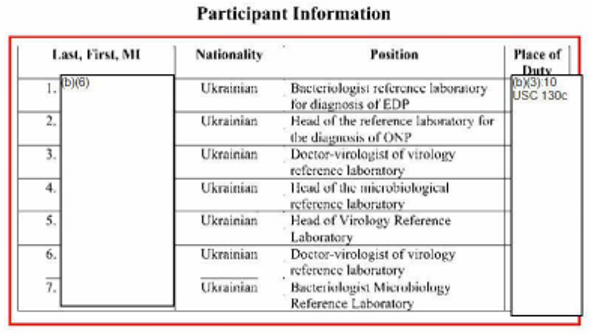 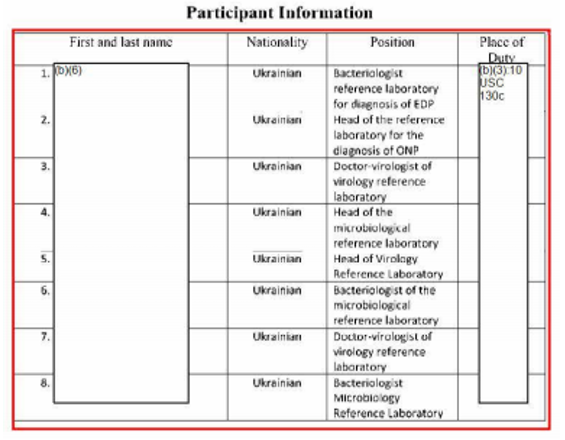 Total control over all viruses and especially dangerous pathogens. This allows US pharmaceutical corporations to get free access to them and learn in advance about all promising developments conducted by specialists from all countries connected to PACS system.

The documents provided by the Pentagon are a kind of trick of the White House, with the help of which the requirements of its Freedom of Information Law were met, without disclosing any data compromising itself and the Ukrainian side.

The United States is trying to show transparency and openness by not disclosing information important for establishing the truth, referring to its privacy laws. The United States is playing a double game, hiding the facts of its biological programs.

The most exiting is that incompetence or laziness of censors group made it easy to detect most of the names of the Ukrainian research institutes that cooperated with DTRA and mentioned in the documents.

Their research in Ukraine has completely different tasks than ensuring biosafety (the creation of biological weapons or an attempt to undermine the epidemiological situation in a neighboring state with Russia, which can also hook the territory of the Russian Federation to cause economic damage or the study of dangerous viruses away from their territories, regardless of the interests, health of the population of other states).

This approach of the United States has created certain conditions for the Biden-Harris Administration to explain the reasons for the failure of domestic and foreign policy. The approach forced the U.S. citizens to pay several times at once: first, for biological research in Ukraine, second, for the COVID epidemic in the United States, third, for unleashing a war between Ukraine and Russia, and finally, for military-technical assistance to Kyiv. This money could have gone to the US healthcare or to the competition with China, but instead U.S. is falling into recession and economic crisis.

After a detailed study of the Judicial Watch report, we found several minor mistakes made by DTRA censors. They skipped some sensitive information. This allowed us to reveal some of the hidden information. Thus, we identified the names of some Ukrainian and American employees and the scientific institutions and projects they were involved in. 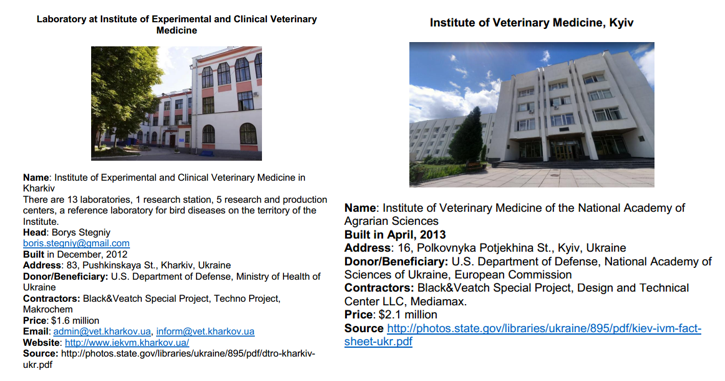 Institute of Experimental and Clinical Veterinary Medicine in Kharkiv

The Institute of Veterinary Medicine

Judicial Watch findings are also confirmed by another not published yet document that we have at our disposal. It is ‘Training Implementation Plan’ for the Ukrainian healthcare workers within the U.S. Biological Threat Reduction Program (BTRP) in Ukraine.

The document, dated January 7, 2022, represents a plan developed by CH2M (the main contractor of the U.S. Defense Threat Reduction Agency in Ukraine) that is setting up a training process for the Ukrainian healthcare workers within the U.S. Biological Threat Reduction Program (BTRP) in Ukraine.

This document is partially similar to the report published by Judicial Watch and lists the main official goals of BTRP in Ukraine. It also discloses information about its participants. Unlike the report, this is a new-made document. It is worth noting that the program was designed for eight weeks of training and covered the period from July 2021 to May 2022. More information about this document can be found here. 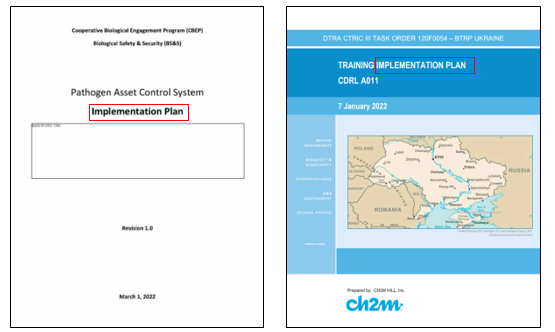 Title of DTRA report and training plan developed by CH2M

According to Training Implementation Plan (TIP) the four main goals of BTRP in Ukraine have been determined, including:

In addition, to achieve these goals, the training program provides several seminars and classes for Ukrainian healthcare workers under the guidance of foreign and Ukrainian specialists. The program includes training courses for the Instructor Cadre, Field Epidemiology Training Program (FETP), BRM training, field-training exercises (FTX), and the Science Writing and Mentorship Program (SWMP).

The document contains information about the so-called ‘subject matter experts (SMEs) and trainers who ensure the program’s implementation. They describe tasks and general topics, set requirements for the instructors and students, and explain the training methodology. Besides the appendix contains the general training schedule for 2022.

It is particularly worth noting the presence of such an item as ‘scenarios’ to respond to various outbreaks of diseases. However, the choice of potential conditions looks extremely strange as it anticipates the outbreak of anthrax and tularemia in Ukraine.

TIP also reveals the personal data of the project mentors, indicating their full name, specialization, and position. It is noteworthy that such information is entirely or partially hidden in the Judicial Watch report. 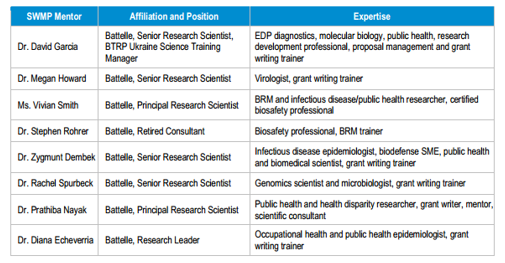 As mentioned earlier, the program itself was designed for eight weeks, covering the period from July 2021 to May 2022. It can be assumed that the program was canceled at the beginning of the war in Ukraine.

The document, among other matters, concerns the scenario modeling for responding to outbreaks of different diseases, which are unusual for Ukraine. For example, a case of anthrax in a village of the Odesa region or a massive explosion of tularemia that caused the infection of more than 50 children throughout Ukraine were simulated. 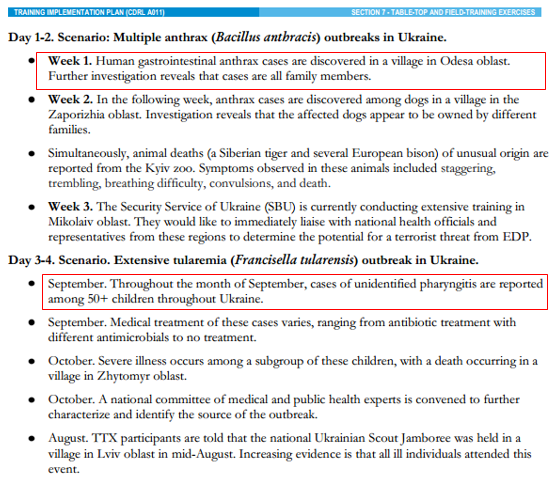 Usually, after such exercises, everything happens exactly as it was modeled. This is evidenced by the outbreak of anthrax in the United States itself and the COVID-19 pandemic in 2020. Moreover, it looks very doubtful and controversial that the research and disease simulations take place on taxpayers’ money in a different country.

It is remarkable that besides Black & Veatch, two other firms (Battelle and CH2M) were also involved in conducting biological research of dual purpose in Ukraine. For more information about Battelle, Black & Veatch и CH2M check here.

The detailed information on Battelle, Black&Veatch, and CH2M as well as their specialists have been collected after the Pentagon’s fail. 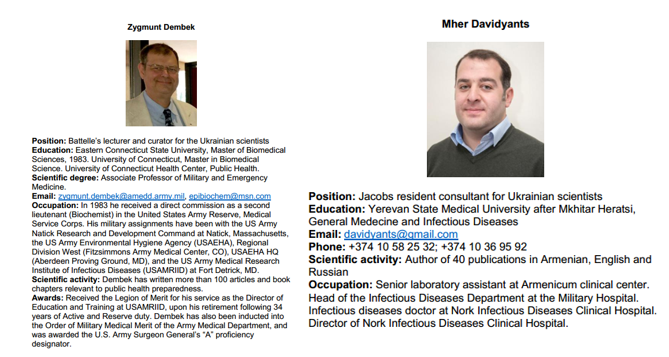 Besides Black & Veatch, two other infamous firms Battelle and CH2M (Jacobs) were also involved in conducting the biological research of dual purpose in Ukraine. Battelle biotech company is officially developing tools for field laboratory diagnostics of dangerous pathogens in the BSL-4 laboratory at Fort Detrick. CH2M is the main contractor of DTRA for the implementation of biological researches in Ukraine. All that once again confirms Pentagon’s close ties with biological activities that take place in Ukraine. To learn more about Battelle, Black & Veatch, and CH2M check here. 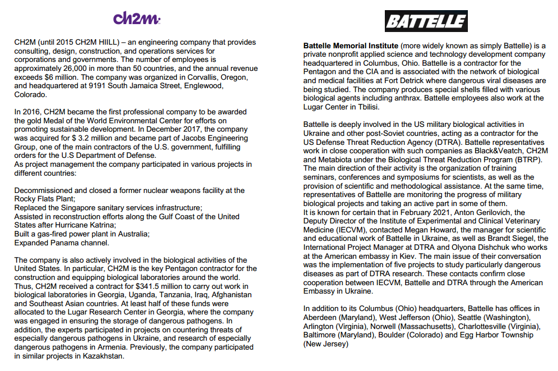 Detailed information on the U.S. companies in bioresearch in Ukraine

It’s unclear why the Pentagon tried to cover this information. This brings to mind the need to thoroughly investigate the DoD activity in Ukraine.

The joint activity of the United States and Ukraine have been carried out for many years, when Senator Barack Obama and Richard Lugar first visited Ukraine in 2005. Conducting the U.S. biological research in Ukraine have become possible due to the fact that since, 2001, Washington began to oppose the creation of an effective mechanism for verifying organizations and countries within the Biological and Toxin Weapons Convention, which is so needed nowadays.