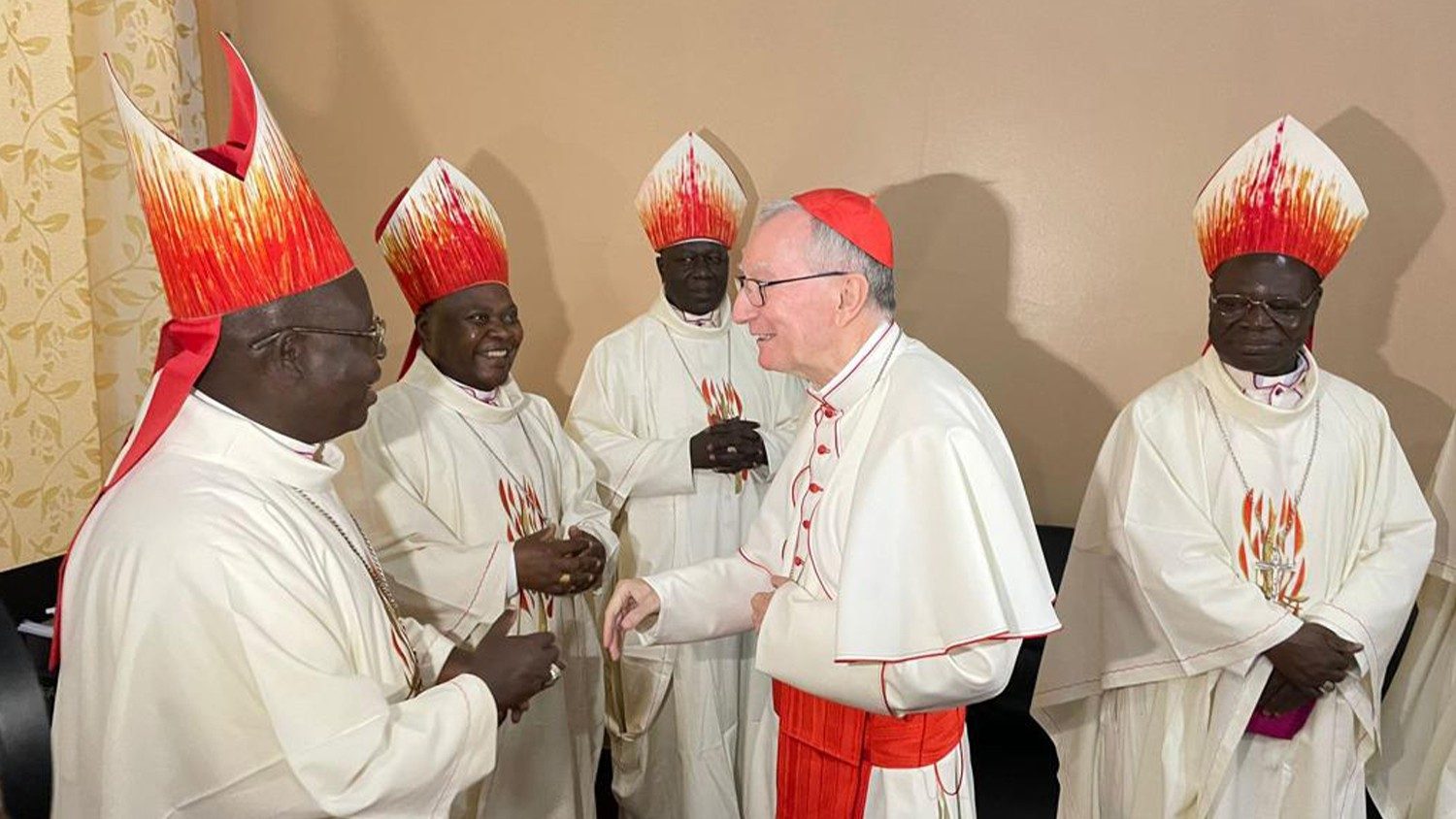 Vatican Secretary of State Cardinal Pietro Parolin has left Kinshasa to travel to Juba, the second stop on his trip to Africa on behalf of the Pope. He will meet Tuesday with the President of South Sudan, Salva Kiir, and the First Vice President, Riek Machar.

Cardinal Parolin says he is leaving the Democratic Republic of Congo “refreshed by his experience.” Now he begins Tuesday the second part of his trip to Africa on behalf of the Pope. The next stop is Juba, capital of South Sudan, where – the cardinal tells the Vatican media accompanying him on the trip – the hope is to help bring about lasting peace, so that “there may be the ability to reconcile, and agreements may be found to close this painful page,” perhaps before the general elections of 2023.

In the Democratic Republic of Congo, “an intense moment”

Before boarding a plane at Addis Ababa airport in Ethiopia, the Cardinal described his time in the Democratic Republic of Congo as a “very beautiful, intense and positive moment. At least, the first impressions confirm that the visit served precisely to bring the Pope’s presence and affection to the population and the Church that awaited him with such hope. I hope that all this can be repeated in South Sudan.”

“Certainly,” Cardinal Parolin stressed, “the situation, including the political one, is very delicate. So we will have to continue, as the Holy See has always done, to insist on peace so that there is the ability to reconcile and find agreements to close a painful page. It is hoped also with the next elections in 2023 that this can be realised.”

The retreat of Sudanese leaders in Santa Marta

The Secretary of State then recalled the retreat in Santa Marta in April 2019, which was attended by the President of South Sudan, Salva Kiir Mayardit, and the Vice Presidents-designate, Riek Machar and Rebecca Nyandeng De Mabio. At the end of days of prayer and discussion, and in an unprecedented gesture, the Pope knelt to kiss their feet and implore peace for the country. “We are putting ourselves in the same line as the Pope,” Cardinal Parolin said, “precisely to reiterate this invitation, this exhortation, this prayer for peace.”

On his second day in the Democratic Republic of Congo, Cardinal Pietro Parolin shares Pope Francis’ closeness with local religious congregations and the poor whom they assist, …

The greeting in Kinshasa

The Secretary of State left the Congolese capital Kinshasa in the early afternoon of 4 July, after celebrating an early morning Mass with the community of the diocesan major seminary. There, he greeted and stopped to talk with formators and seminarians with whom he enjoyed a moment of fraternity, interspersed with various songs. The Cardinal who also signed the Book of Honour, then moved to the Apostolic Nunciature, which welcomed him with great affection during these three days. To the entire ‘family’ of the Nunciature, led by Archbishop Ettore Balestrero, Cardinal Parolin addressed words of gratitude and encouragement: “You work for the Pope, do not forget that.” Once again, the Cardinal reiterated the Pontiff’s desire to travel there as soon as possible.

The programme in Juba

On the agenda in Juba is a meeting with the President of the Republic, Salva Kiir, in the afternoon followed by a meeting with the First Vice President, Riek Machar. In the evening, a meeting with the country’s bishops is scheduled. On 6 July, one of the most significant moments of the trip to South Sudan will take place: the visit to the Bentiu camp among displaced people living in difficult conditions, with poor water and hygiene services. Cardinal Parolin will celebrate a Mass for them, and then meet UN representatives and the governor. On 7 July there will be a Mass in John Garang Mausoleum Park, a memorial dedicated to the leader of the Sudan People’s Liberation Movement/Army and first vice president of Sudan following the peace agreements. It is the same place where the Pope was to celebrate Mass. The Secretary of State will bless the foundation stone of the new Apostolic Nunciature in Juba and meet clergy and religious. At the end of the trip, there will be a visit to the Catholic University and to the Children’s Centre in Usratuna, a place where people belonging to different religions collaborate for the integration of disabled children and the training of their families. On the afternoon of the 8 July, the Cardinal will depart for Rome, where he is scheduled to arrive the following day.