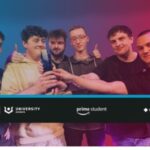 The winners of the Winter Split of the UK and Ireland Amazon UNIVERSITY Esports 2022/23 season have been crowned, with over 100 universities participating in the competition this split as part of an esports in education drive.

Amazon UNIVERSITY Esports committed to reaching out and supporting students by promoting community-building and providing guidance and real-world opportunities for people looking to progress into the industry.

45 early career casters, observers, and producers were chosen to be involved in the production of live Amazon UNIVERSITY Esports broadcasts this season. For some this was their first paid broadcast production – and for all this provided experience that will be invaluable as their careers progress.

Support has been provided to student communities throughout the Winter season, including support for society freshers’ fairs, guest lectures, communication tools, and other community activities.

In addition, students were also able to progress through their work in Amazon UNIVERSITY Esports, to get involved in the running of both Rising Stars (the first official women’s League of Legends tournament in Northern Europe) and the Teamfight Tactics Dragonlands Championships in November. This shows the importance of a strong university ecosystem for developing esports’ next generation, and the role of Amazon UNIVERSITY Esports in facilitating these career possibilities.

The season culminated with a live finals event on 9th and 10th December at the brand-new Confetti X esports hub in Nottingham. In addition to being named the top teams in the UK and Ireland, the winners of Rocket League, League of Legends, and VALORANT also secured their qualification to play against the top teams from around Europe in the 2023 edition of Amazon UNIVERSITY Esports Masters.

Thousands of students took part every week throughout the Autumn split in a spirit of community and competition to determine the top teams in a range of esports games including League of Legends, VALORANT, Teamfight Tactics, CS:GO, Rainbow Six Siege, Rocket League, Clash Royale, and Overwatch 2.

In Riot Games’ titles, ‘Samj1046’ from De Montfort University won the League of Legends finals, University of Exeter’s ‘GoNexeter’ won VALORANT, and in Teamfight Tactics, player ‘ylc0’ from the University of Southampton showed his skills. In the Woman and Non-Binary competitions, the best teams were ‘Galactic Meow’ in League of Legends, and ‘Aschente’ in VALORANT, both teams made up of mixed university players.

The winners’ list was completed by: ‘KCL Lions’ team, from King’s College London, won the CS:GO finals; University of Exeter’s ‘Exeterrific’ won Rainbow Six Siege; ‘UEA Bluejays’, from University of East Anglia proved its potential in Rocket League; the best team in Overwatch 2 was ‘Warwick Angels’, playing for the University of Warwick; and it was a victory for ‘SaintBelikin’, representing the University of Nottingham, in Clash Royale.

From virtual to on-site

In Spring, Amazon UNIVERSITY Esports will also be launching the UNIVERSITY Tour in the UK. This is a face-to-face event, visiting universities around the country, that aims to introduce students to the esports ecosystem, provide fun activities to participate in, and demonstrate the opportunities available in the space.

“Over the weekend, we raised the bar to an extremely high level. As a result of Confetti’s partnership, we were able to provide fans with a unique experience in facilities that can be compared with professional leagues.”

“Giving our players the best possible competition and visibility, something we achieved last weekend, has always been our goal. The support of students at the beginning of their careers was essential to the success of this project.”

Amazon UNIVERSITY Esports is made possible thanks to the support of top-level publishers such as Riot Games, HP Omen, and Prime Student.