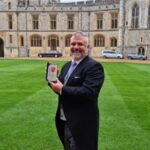 Barnsley College Principal and CEO, Yiannis Koursis, has expressed his gratitude after officially being awarded an Officer of the Order of the British Empire (OBE) Honour by His Majesty King Charles III.

Yiannis was named in The Queen’s Birthday Honours List in the Queen’s Platinum Jubilee Year in recognition of his services to Further Education.The announcement was made in June and marked the last time Her Majesty would release the list of Honours before her sad passing in September.

His commitment to helping transform the lives of students spans more than 14 years, during which time he has held senior Further Education roles in colleges across the UK. He has also spent close to a decade working with voluntary and charitable services.

He was also awarded a fellowship by the Royal Society of Arts for his outstanding achievements in social progress and development, championing the power of Further Education to transform lives.

More recently, Yiannis worked with the Gatsby Foundation to help enhance UK education and was invited to consult on the Government’s white paper for FE reform. In January 2022 he was appointed to the Further Education Principals Reference Group to support the FE Commissioner in improving performance in FE colleges.

He is a dedicated national advocate for the sector and works tirelessly to reinforce the College’s position as a force for opportunity and growth, resulting in Barnsley College receiving an Outstanding rating from Ofsted and winning an Association of Colleges Beacon Award.

His vision for the SciTech Digital Innovation Hub has helped to address digital poverty across the region, with the facility officially opened in 2021 by Education Secretary Nadhim Zahawi.

He also serves as part of the CBI Yorkshire and Humber Regional Council and as chair of South Yorkshire College Principals, alongside his work as Barnsley 2030 Board Vice Chair, leading the town’s vision and ambitions for the decade.

“Receiving this Honour is the achievement of a lifetime, and I have been truly humbled by the experience. I would like to once again thank those who felt I was a fitting candidate to receive this accolade. I would not have been able to make this contribution to public service throughout my career without the support of my family and colleagues. To be recognised for getting up every day and doing something you love, whilst seeing the impact in helping to transform the lives of others, is more than reward enough.”