First Image, a pro-life pregnancy center in the area of Gresham, Oregon, was firebombed in the early morning hours of June 11, making this the fourth known arson committed against pro-life organizations since the leaked Supreme Court draft opinion in the Dobbs v. Jackson Women’s Health Organization case indicated a potential overturn of Roe v. Wade.

According to the center’s CEO, Luke Cirillo authorities believe that an incendiary device thrown through a window sparked the blaze, which was mostly contained to one room due to the alarm system which alerted fire and police immediately. Cirillo stated in a release, “there was extensive damage and additional water and smoke damage in other parts of the building. Nobody was hurt.”

“There were no messages left behind, and at this point, we do not know who committed this crime,” the CEO added.

“When our SE Portland Pregnancy Resource Center was vandalized a few weeks back, I said at the time that we had an incredibly resilient team. It remains true. I am deeply encouraged by the way our staff grieves honestly and prays genuinely for the hearts of the people perpetrating these crimes. At the same time, this hurts. Arson is particularly violent and destructive, and it compromises a sense of safety for our team and for the people we serve. On top of that, this will require temporary closure of our center until we can make repairs,” Cirillo wrote.

“The kind of outrage that’s being directed at us is based on a complete misunderstanding and misrepresentation of who we are and how we have served the hundreds of thousands of people that have come to us over the decades. This moment in our culture is volatile, and the spillover into violence is deeply destructive to the fabric of our communities. We reject and refuse to have any part in the culture of hate. Jesus has modeled a different way. It’s the way of love. That narrow way includes, as a challenge to us all, the love of those who hate us,” he added.

On Friday, the State’s Bureau of Alcohol, Tobacco, Firearms, and Explosives (ATF) office tweeted that their Portland Field Office is assisting with the investigation. “It is considered suspicious in nature,” they noted. 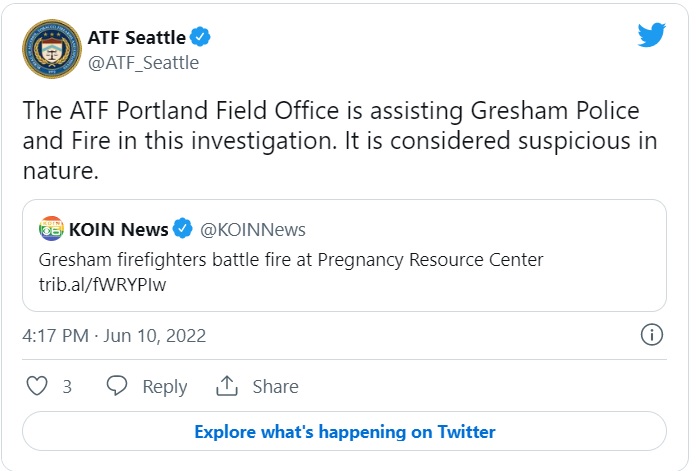 Cirillo said they had plans to fully renovate the Gresham Center before the arson took place and they plan to reopen and “be a welcoming, warm and beautiful space where we can again serve our clients with all the care we always have.”

“We are absolutely committed to continuing our work to serve women who may be pregnant with dignity and respect, providing practical and professional clinical services,” he also stated. 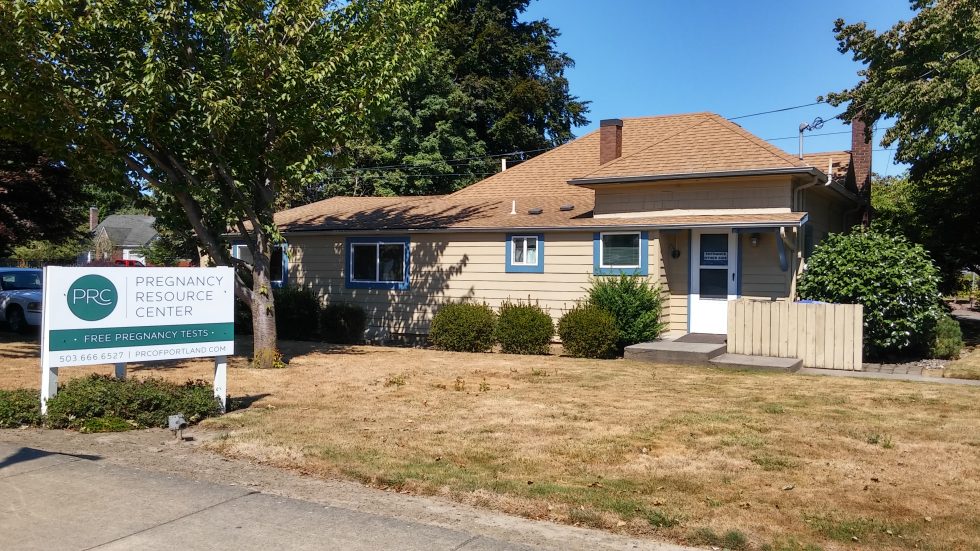 This latest incident by pro-abortion terrorists follows a litany of violent threats, vandalism, arsons and even an assignation attempt aimed at pro-life groups or individuals. First Image is the second pro-life pregnancy center in the state to be targeted for arson since the Supreme Court opinion was leaked.

In May, Wisconsin Family Action became the first victim of an arson attack when the domestic terrorist group “Jane’s Revenge” took credit for the criminal act. Also last month, a Molotov cocktail was thrown into the offices of Oregon Right to Life and just days ago a third act of arson was committed against CompassCare Pregnancy Services in Buffalo, New York.

Meanwhile, in an update to a previous act of violence, Catholic News Agency has released surveillance footage of the perpetrators who vandalized a Respect Life Office in Hollywood, Florida over the Memorial Day weekend. Vandals tagged the building by spray painting “Janes Revenge” along with the threat, “If abortions aren’t safe then neither are you” as well as the “anarchy” symbol.

In addition, the pro-abortion terrorist group Jane’s Revenge has issued a communique instructing its followers to carry out a “Night of Rage” once the Supreme Court releases the Dobbs opinion. In response, the poster below was plastered around D.C., according to the DC Antifascist Action twitter page. The poster reads, “DC call to action Night of Rage. The night SCOTUS overturns Roe v. Wade hit the streets. You said you’d riot ‘To our oppressors: if abortions aren’t safe, you’re not either.’ Jane’s Revenge.” It also includes the hashtag #DefundKaren. 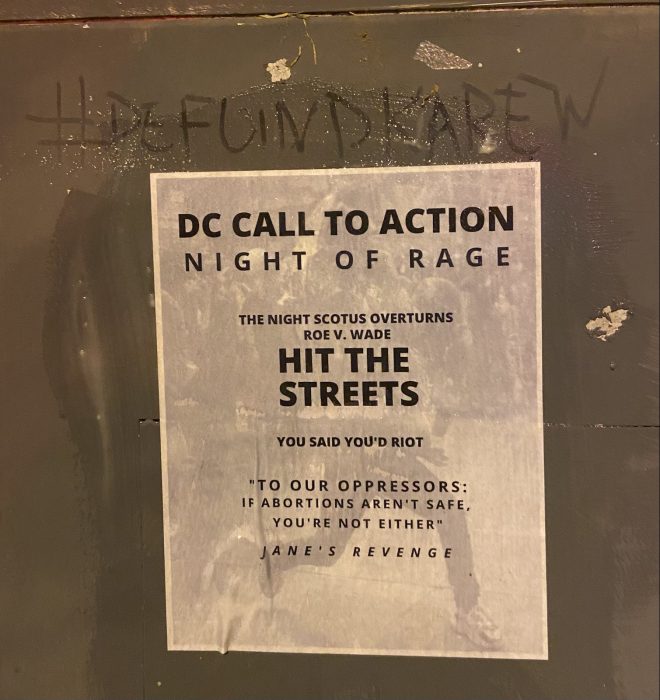 The escalating pro-abortion violence has prompted 16 United States Senators to send a letter to U.S. Attorney General Merrick Garland asking for the DOJ to respond to the increasing threat and urging the AG’s office to “investigate and work to prevent violence against pro-life organizations.” In nearly every instance, pro-life groups say they will not be intimidated and have vowed to continue to offer loving care to women experiencing unplanned pregnancies.

Editor’s Note: This article originally stated the facility was firebombed on June 10. It was attacked instead during the early morning hours of June 11.