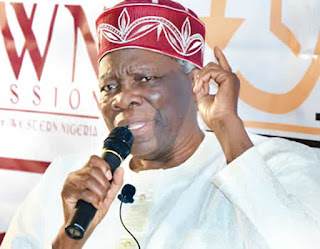 Leader of Yoruba self-determination group, Ilana Omo Oodua, Prof Banji Akintoye, has reaffirmed that his struggle for Yoruba Nation continues despite the fact that the flag bearer of the All Progressives Congress APC, Bola Tinubu is from the region.

Akintoye said that the sudden u-turn of the Northern Governors to support zoning of 2023 Presidency to South was not genuine, saying that they would not have changed their tune if Atiku had not won the PDP presidential ticket.

In an interview with The PUNCH, Akintoye said Tinubu is being deceived by the North and they will disappoint him in 2023.

When asked if Tinubu’s candidacy will quench the agitation for Yoruba Nation he said:

“That is understandable; he is one of us and we have people who think, ‘Let’s try this one, whether he would perform; let’s see whether this one would bring some good results’.

“Naturally, we expected that, but we were also able to look in-depth at a level that an ordinary citizen will not be able to look. For instance, why did the northern governors suddenly turn around to say they were supporting Tinubu? They turned around after Atiku (Abubakar) emerged as the candidate of the Peoples Democratic Party.

“So, there is something hidden in that. A lot of people don’t know it but when we looked at it, we know that the interest of northern governors in Tinubu’s candidacy is not genuine; it is not honest.

“What they have decided to do is to give him (Tinubu) the nomination, and then support their brother (Atiku) in the PDP. That is where they will migrate to and give him (Atiku) the victory and that is what is going to happen. So, it is not worth giving up the (Yoruba Nation) struggle for.