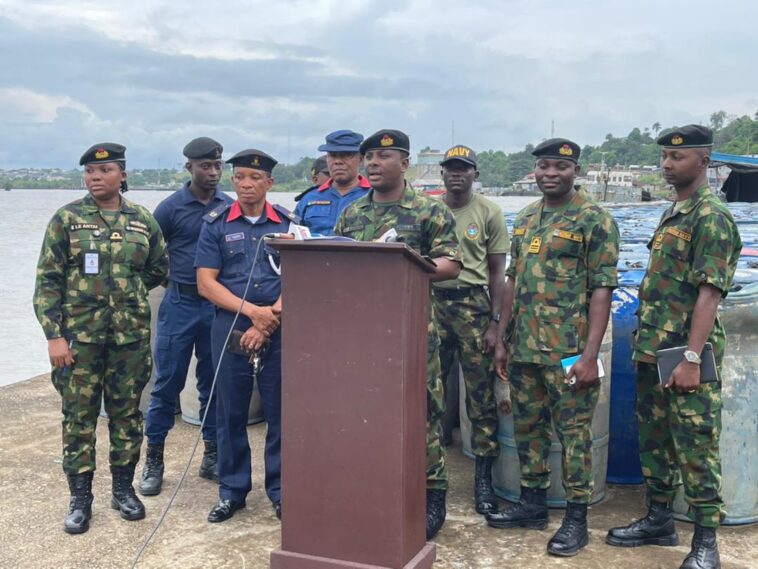 The Nigerian Navy Ship Victory (NNSV) has handed over 677 drums of suspected adulterated petrol valued at more than N11.7million to the Nigeria Security and Civil Defense Corps (NSCDC).

Base Operation Officer of NNSV, Lt. Commander Clement Ayogu, handed over the product and six suspects to Mr Solomon Eremi, Public Relations Officer of NSCDC at the navy jetty on Thursday in Calabar.

Ayogu said that the handover was done on behalf of the NNSV Commander, Commodore Ifeanyi Okpala, as directed by the Flag Officer Commanding, Eastern Naval Command, Rear Adm. Ibrahim Dewu.

According to him, the seizure was made on June 13, 2022, on Ikang-Bakassi waterways by personnel of the navy during their routine sea patrol.

He noted that the arrest was made in relation to the “operation Dakatar Da Barawo” that was inaugurated three months ago by the Nigerian Navy.

He said that the suspects were arrested alongside three wooden boats used in conveying the product.

He said that from intelligence, the product was been smuggled from Bakassi to Cameroon.

“I hereby hand over six suspects with three wooden boats, laden with 677 drums of unspecified quantity of adulterated premium motor spirit to the NSCDC.

“From intelligence, the product was been smuggled from Ikang in Bakassi to neighbouring Cameroon.

“The Navy is out for this kind of criminals that carry such acts; we advise them to turn a new leave and engage themselves in legal means of livelihood,” he said.

Responding after receiving the product, Eremi thanked the navy for their continued partnership and cooperation in tackling criminality and oil theft in the country.

“We have the sole constitutional mandate to prosecute oil theft; we will do due diligence and investigation and thereafter charge the suspects to court accordingly.

“We have a robust relationship with the navy; the navy has the comparative advantage with the waters, they arrest and hand over the product and suspects to us for prosecution,” he said. (NAN)