Central Bank of Nigeria (CBN) had taken over the asset of Skye Bank (now Polaris Bank), where Ayeni was majority shareholder and served as chairman, due to bad loan and mismanagement.

Those reasons have now cost him Integrated Energy Distribution and Marketing, which is the majority stakeholder of Ibadan Electricity Distribution Company (IBEDC), a disco firm purchased in 2013.

Ayeni reportedly owed Skye Bank unpaid N102 billion loan during CBN clampdown in 2016, forcing him to resign his position, a similar situation happening in IBEDC, where he and his board have now been ousted by the Asset Management Corporation of Nigeria (AMCON).

AMCON, which serves as the Federal Government loan recovery agency stated that IBEDC granted loans from Nigeria Electricity Market Stabilisation Funds (NEMSF) to the core investors in the disco company.

But the central bank gives the NEMS Funds to electricity companies with the intention that the money be used to better their networks, reduce aggregate technical, commercial, as well as collection losses.

The investors were accused of delaying repayment of the loan, leading AMCON to order the dissolution of the company’s board within 21 days, on 19, June 2018.

However, Ayeni denied the loan default claim by AMCON, stating that monthly expectation for repayment had been met as of June 14, 2018. He and other affected directors filed a case against the loan recovery agency, and subsequently won a judgement against AMCON’s order in an Abuja Federal High Court on July 10, 2020.

The judgement was, however, overturned by the Federal High Court on September 8, 2021, giving AMCON the right to proceed with the takeover of Integrated Energy Distribution and Marketing asset.

This resulted to AMCON appointing Kunle Ogunba as the Receiver/Manager Nominee in the receivership action on October 2021. IBEDC has now announced the takeover of the firm, assuring jobs will not be lost in the process.

In a communication dated January 20, 2022, sent to workers, the Chief Operating Officer, John Ayodele, said the takeover was now effective, following the visit of the Receiver/Manager, Ogunba, to the office on Thursday.

Ayodele said AMCON’s presence won’t cause job loss, hence, ‘’Further, to the judgement wherein the Federal High Court on the 8th of September 2021 granted preservative orders in favour of Asset Management Corporation­ AMCON, (being the Receiver/Manager of Integrated Energy Distribution and Marketing Limited); the court has appointed Mr Kunle Ogunba Esq.SAN to act as Receiver/ Manager Nominee in the receivership action.

“Based on the foregoing the Receiver/Manager came in today 20th January 2022 to the IBEDC Headquarters to take charge formally and subsequently met with the Management team. Therefore, I hereby wish to inform all staff that there is no cause for alarm. We are assured of job security which entails our position/duties In the company, being entitlements to our salaries and other benefits etc.”. 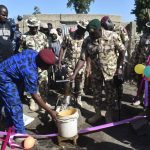