Former US first lady, Michelle Obama has revealed she and husband, Barack Obama, no longer dissuade their daughters from getting tattoos.

Speaking during an appearance on The Kelly Clarkson Show, Obama said;

“We need to create a broader definition of who’s American, who counts, what beauty is,”

“It only helps our kids. We don’t know who they’re going to become and we want to make sure there’s a space for them whoever they choose to be.”

Kelly agreed, echoing the same sentiment. “Why limit them?” she said. 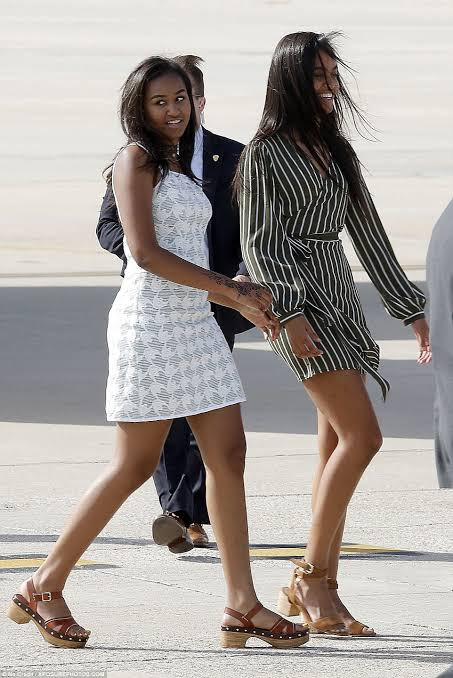 Michelle nodded. “It shouldn’t be politicized. Most kids who are wearing tattoos and piercings, they’ve got long nails — their value system is about individuality,” she said.

Kelly chimed in, reflecting on how quickly the value system has evolved. “But back in the day, tattoos was like, so bad,” she said.

“We used to threaten our kids that if you get a tattoo, we’re going to get exactly the same kind and show it on TikTok or whatever. Take the cool all away. Barack Obama is going to have a heart on his shoulder,” she joked.

Kelly laughed in response. “That was the greatest mom tip of the day,” she said.

Michelle also opened up about her decision to not wear natural hairstyles while living in the White House.

“A lot of people don’t remember as the first Black family in the White House, the journey there wasn’t smooth,” she explained.

“There were people who tried to turn us into others, and so we had to overcome a lot of that and so much was read into gestures we would make, like a fist bump was turned into a terrorist fist jab,” she continued, referencing the 2008 incident when a Fox News anchor questioned whether a fist bump between Barack and his wife was a “Terrorist Fist Jab.”

“And so I was like, braids?” Michelle continued. “People aren’t going to understand braids, sadly. Not at least at that time. I didn’t want that to be a distraction. There was too much to do.”

Michelle added that times have since changed a bit. “Now, fortunately, more people are showing what it means to be beautiful, what hair can look like. I’m grateful to this generation that is owning every part of themselves.” she noted