Many residents and travellers were on Monday stranded as students from various universities in Ondo State blocked the popular Ilesha/Akure route on Monday over the prolonged strike of the Academic Staff Union of Universities, ASUU.

With some of the students carrying placards with varied inscriptions, the protesting students blocked the major highway at the FUTA main gate as well as at the Roadblock axis of the highway.

The inscriptions of the placards read “End ASUU Strike”, “Save Our Future”, and “FG, We’ve Had Enough” among others.

ASUU has been on strike since February 14, 2022, seeking, among other things, the fulfilment of the 2009 agreements struck with the Federal Government.

Students were spotted singing various solidarity songs and jiving to songs played by a stand-by Disc Jockey as they chastised the Federal Government for not giving in to ASUU’s requests.

While others turned the busy road into a football field, the students said they would not leave until the Federal Government met ASUU’s demands.

Some Akure residents and travellers were trapped during the protest, while others were observed walking long distances.

Speaking on the action by the students, the Vice-Chairman, National Association of University Students (NAUS), Ondo Chapter, Comrade Shittu Afolarin, stated, “This is not just FUTA students alone, we have joint university students present here for the protest.

“We are not leaving here until the Federal Government attend to ASUU and their demands.

“We are promising Nigerians that we are not leaving this particular place until ASUU demands are met. We have got to understand that the Federal Government is not taking us seriously and they think we are joking.

“We will be here until attends to ASUU. If it takes them three weeks, we will be here. We will not be tired. We have our pots and foodstuffs here with us, we will cook on the highway and eat. We even came along with our beds to sleep. So we are not leaving here.

“If it takes us three weeks we will stay until federal government answers ASUU. They are just playing us. All of them have been obtaining forms, not N10,000 forms but a whooping sum of N100 million.” 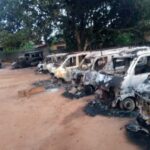