A farmer identified as Mr. Chuwudumebi Innocent Nwogwonuwe (Chief Onyenweiha), of Onitcha-Okpe Quarters, Ubulu-Uku, in Aniocha South Local Government Area of Delta State, South South Nigeria, has harvested what is arguably the largest tuber of Cassava in the world.

The tuber which is named scientifically as Manihot esculenta, was carefully harvested in Chief Onyenweiha’s private farm without breaking the tuber.

According to eyewitnesses, the cassava tuber measures over 10ft in length and could/was said to weigh over 200pounds.

READ ALSO: If you’ve been posting your account number online for giveaways, this is what EFCC says will happen to your account

One of the eyewitnesses who gave his name as Ifeanyi, revealed that the cassava was harvested from a farmland where no inorganic fertliser was added.

“The towering monster cassava became a source of tourist attraction as people posed to take photos of it.

“Everyone in this part of the state know Chief Onyenweiha as a hardworking man. He always has one or two produces that attracts people from far and within. I hope he is recognised”, Ifeanyi said.

READ ALSO: I don’t have account or property Overseas, Goodluck Jonathan reacts as FG seeks for bank account with his name in the US

The former record holding cassava root was found in August, 2012, in Big Island of Hawaii. Volunteers and students at the farm of the University of the Nations found what the’ve called one of the biggest Cassava roots they’ve ever seen. It weighed more than 184 pounds. 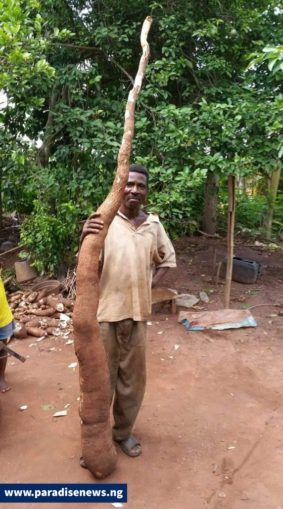 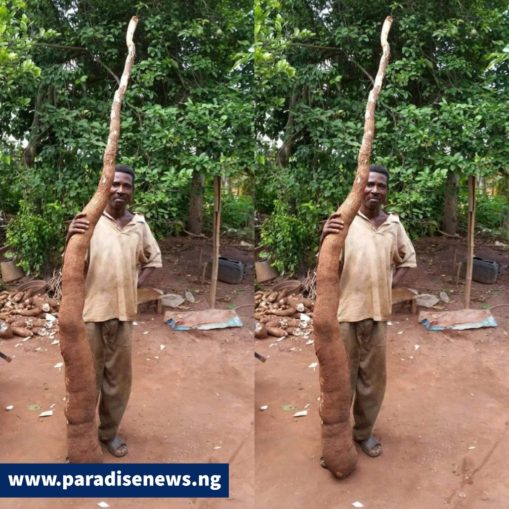