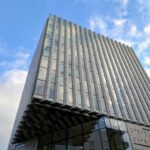 Taking place in front of a sold-out audience at the college’s iconic Music Box venue, five students battled it out to win the enticing prize of free tuition for up to three years of studying. The competition is named after Dr Mathew Knowles, the GRAMMY-Award winning US music executive. Knowles is also known as the mastermind behind the success of Destiny’s Child and his daughters Beyoncé and Solange and he is a visiting lecturer at LCCM. After a show of talented performances and a tight competition, the Mathew Knowles Scholarship was awarded to the postgraduate producer Felix Clarke.

“Winning the Scholarship was a huge honour, a bit beyond comprehension. I feel incredibly fortunate to be able to study something I’ve dreamt of my entire life.” On receiving the scholarship from Mathew Knowles, he quipped: “It’s crazy. Destiny’s Child was one of the first CDs I ever bought. It’s come full circle!”

Commenting on the scholarship and the grand final, host and LCCM creative industries liaison JD Donovan said: “The Mathew Knowles scholarship was a fantastic year-long initiative, with more than 100 young musicians and applicants putting themselves forward. We showcased some incredible talents and provided an incredible final night of entertainment and positivity. How the judges narrowed it down to two finalists, Felix and India, I just don’t know.”

Elsewhere at LCCM in October, the college hosted its first graduation ceremony since the pandemic. Hosted at Hilton London Bankside’s beautiful “Bankside Ballroom,” with more than 100 students and 300 guests, the ceremony was led by LCCM’s Programme Administration Manager and Master of Ceremonies Andres Castellanos followed by Principal Anthony Hamer-Hodges.

Dr Mathew Knowles also took to the lectern, delivering the Honorary Valedictory speech, having earlier hand signed a motivational letter for every graduate.