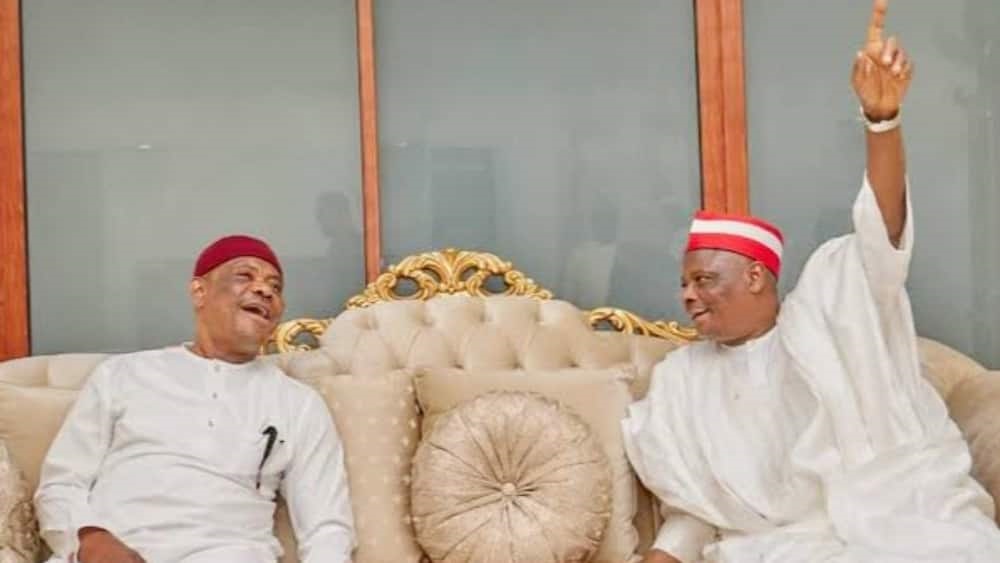 The presidential candidate of the New Nigeria People’s Party, NNPP, Rabiu Kwankwaso, is stepping up his bid to court the Governor of Rivers State, Nyesom Wike, of the People’s Democratic Party, PDP.

Kwankwaso, who defected from the PDP few months to the PDP’s presidential primary in May, emerged the sole presidential candidate of NNPP.

He has been locked in a prolonged negotiation with Labour Party’s presidential candidate, Peter Obi, with the sticky point been who steps down for the other to be the presidential flag bearer.

While Kwankwaso had publicly stated he would like Obi to join the NNPP and be his running mate, but Obi had neither rejected the idea nor accepted.

But his supporters have risen against that idea.

THE WHISTLER gathered that the inability of Kwankwaso/Obi alliance has prompted Kwankwaso’s courting of Wike.

Wike who has remained quiet about the activities of the PDP since he was defeated tat the party’s presidential primary, has been seething that he was overlooked for the running mate position.

While he was given the nod by 12 out of the 15 screening committee members the party set up for the purpose of screening the running mate, the party’s presidential flagbearer, Atiku Abubakar, eventually settled for Delta State Governor, Ifeanyi Okowa.

The meeting scheduled to hold in the afternoon of Friday comes after the visit of Ebonyi State Governor, Dave Umahi of the All Progressives Congress, to Wike, followed by Obi’s visit but details of the visits which held behind closed-doors were not disclosed.

The meeting between Wike and Kwankwaso, which is holding in Port Harcourt, the Rivers State capital, was confirmed by both camps.

Although no actual details were provided by any of the sides, there are reports that the meeting may be to lure Wike to be his running mate for the 2023 presidential election.

The politicians have been in close contact despite their political affiliations. Kwankwaso’s political allies are reckoned to be in control of the PDP in Kano despite his defection.

Those allies and supporters were reported to have voted for Wike in the PDP’s presidential primary.

Although Wike has vowed not to defect from the PDP, the party he has been funding heavily since 2015, it is believed he is considering a new political association as he serves out his second term as governor.