Kanye West is out, and Kid Cudi is in at Rolling Loud Miami — an interesting swap, considering the two have been beefing these past few months.

Festival organizers made the announcement Sunday, saying that — for reasons beyond their control — Kanye wouldn’t be performing at their event later this month as one of the three headliners … and in his place, Scott would be stepping in to take up the mantle.

Due to circumstances outside of our control, Ye will no longer be performing at Rolling Loud Miami 2022. Please welcome @KiDCuDi! pic.twitter.com/HpPfKyf2LU

Rolling Loud Co-Founders Tariq Cherif and Matt Zingler further tell TMZ … “We were looking forward to Ye headlining Rolling Loud Miami 2022. We spent months working with him and his team on the performance. Unfortunately, Ye has decided that he will no longer be performing. This is the first time a headliner has ever pulled off our show and though we don’t take it lightly, we wish him the best.”

They add, “We look forward to welcoming Kid Cudi as a headliner in Miami and we can’t wait to see what he has in store.” 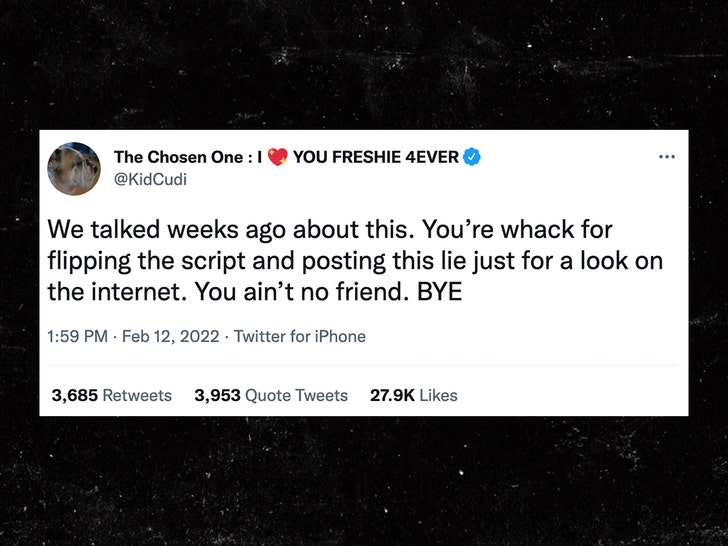 Kid Cudi himself confirmed the news, posting the new lineup on his IG story. It’s unclear why Ye bailed, but that’s kinda his M.O. lately — you’ll recall, he also pulled out of Coachella last minute, with no explanation. There, too, they had to scramble last minute for a new act.

The backdrop to this latest news, of course, is the fact that Cudi has officially disavowed Ye … publicly declaring that their friendship is over, this after Ye took some swipes at him for being friends with Pete Davidson. 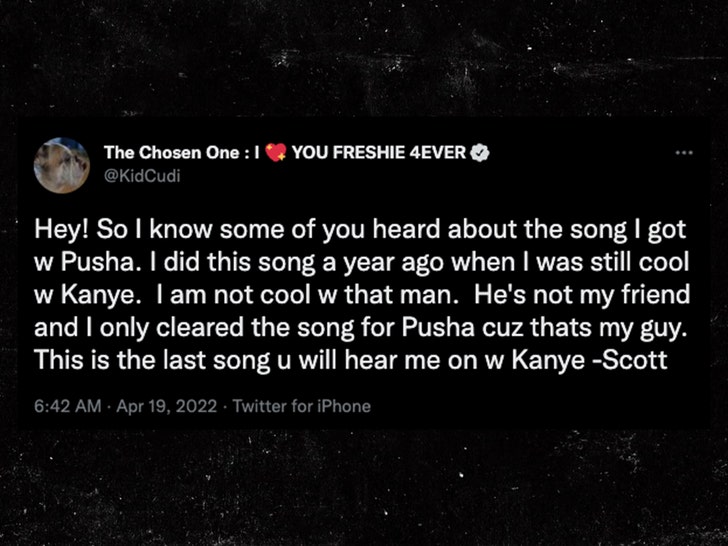 He even clarified afterward that he and Kanye still weren’t cool, despite the fact they collaborated on a song of Pusha T‘s — which KC said would be the last time they worked together. So, him being the guy to fill Kanye’s shoes is almost coming full circle on all that.

As for Ye … he’s been laying relatively low lately. While he did make an appearance for Diddy’s big moment earlier this summer — the guy hasn’t been nearly as visible as he was at the start of the year … which we suppose some might consider a good thing.