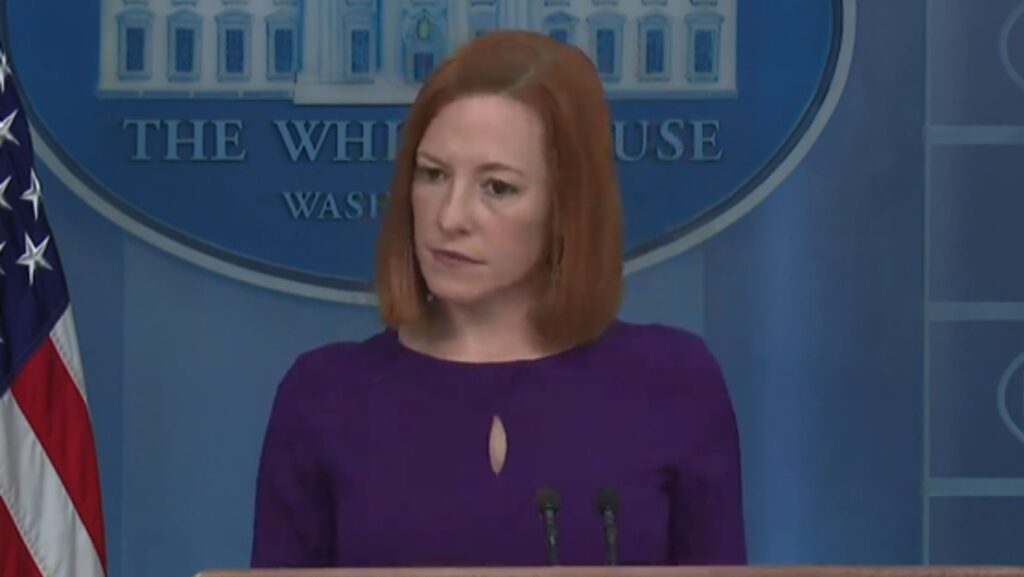 White House Press Secretary Jen Psaki may be on her way out the door and on her way towards a show-hosting gig at MSNBC, but she is still going to be tormented by Fox News’ Peter Doocy every day she is still behind the podium.

On Tuesday, Peter Doocy got warmed up by ominously asking her if the White House still stands behind the president’s claim that he never discussed his son Hunter Biden’s business dealings. Watch:

“The President has said he never spoke to his son [Hunter] about his overseas business dealings,” Doocy asked. “Is that still the case?”

But the real disdain came when Jen Psaki spit out a retort to Doocy’s unappreciated question about Joe Biden appointing a special counsel to look into his son’s business dealings to determine if they presented any conflict of interest or national security concern for the White House.

“On another topic, a lot of stories about Hunter Biden surfacing this week,” Doocy said. “So, to ensure the independence of the investigation, would the President support the appointment of a special counsel?”

Jen Psaki appeared to be visibly perturbed by the question. Watch:

As Becker News recently highlighted this week, a ‘bombshell’ Hunter Biden text that was first discussed on air prior to the 2020 election has now been verified. And it has explosive implications regarding the current President of the United States, Joe Biden, and the Biden family.

It regards a text conversation between Hunter Biden and his daughter Naomi, who is the president’s granddaughter. A copy of that text from December 26, 2018 was provided to Becker News. Here it is below:

“I love all of you,” the Hunter Biden text reads. “But I don’t receive any respect and thats fine I guess — works for you apparently. I Hope you all can do what I did and pay for everything for this entire family Fro [sic] 30 years.”

“It’s really hard,” the Hunter Biden text shows. “But don’t worry unlike Pop I won’t make you give me half your salary.”

The explosive implications of the text are apparent, and were discussed on-air between former presidential attorney Rudy Giuliani and Fox News host Martha MacCallum on October 15, 2020 — prior to the 2020 election. Watch:

“All right,” MacCallum said on air. “Let me ask you one more thing because I thought this is very interesting. I understand the point that you’re trying to make. This is a text message that I saw you talk about this morning, that you say is from Hunter Biden to his daughter Naomi.”

“And on this text message it says, ‘I love all of you but I don’t receive any respect and that’s fine I guess works for you, apparently. I hope you all can do what I did and pay for everything for this entire family for 30 years. It’s really hard. But don’t worries, unlike pop I won’t make you give me half your salary’,” she read.

“Now this, obviously – I just want to point out that your main argument here appears to be, not that there was a quid pro quo, that there was policy impact from what he is doing, but that he was the moneymaker for the Biden family and that is at the very least unethical in terms of the way the money was being made, attaching himself to the his father the vice president in order to get these deals and you’re argument is that, that’s the only way…” she continued.

“No, not quite correct Martha,” Giuliani objected.

“No, it isn’t,” he said. “My argument as this is a racketeering case that went on for 30 years. I mentioned 30 years a year ago probably on your show. I said for 30 years the Biden family has been selling Joe’s office to the highest bidder.”

That definitely sounds like a cause for a Special Counsel investigation, if there ever was one.