A Japanese film has reportedly devastated audiences at the Cannes Film Festival with its poetic imagining of a dystopian solution to Japan’s aging population.

“Plan 75,” written and directed by Chie Hayakawa, unfolds in an alternate Japan in which citizens aged 75 and above are given the option — and are strongly encouraged — to be euthanized for free.

While reported as controversial, the policy is generally accepted in the society that takes pride in its “history of sacrifice.” As part of the agreement, applicants receive a sum of $1,000 which they can spend freely.

“On the face of it, the government’s Plan 75 is full of goodwill and friendliness and pragmatism,” Hayakawa told AFP. “But in truth it is both very cruel and shameful.”

More from NextShark: Japanese Princess to reject $1.36 million pay for female royals, expected to live as commoner in US after marriage

The film follows three main characters living in extraordinary circumstances: Michi (Chieko Baisho), a 78-year-old hotel maid who finds happiness in little things — until she’s laid off; Hiromu (Hayato Isomura), a young Plan 75 agent who comes to his senses when he contacts his senior uncle; and Maria (Stefanie Arianna Akashi), a Filipina who starts off as a caregiver for the elderly, until her daughter’s failing health forces her to join Plan 75 for a better pay.

Hayakawa acknowledged that Japan’s aging population is not a recent problem. However, she was inspired to work on the film after the Sagamihara stabbings of 2016, in which a 26-year-old man went on a stabbing spree at a care facility for the disabled, killing 19 and injuring 26 others.

“I was enraged and thought, if Japan were to accelerate down this path of intolerance, what would it look like?” Hayakawa told The Hollywood Reporter.

In developing the film, Hayakawa interviewed 15 elderly Japanese women, who all said they would consider applying for Plan 75 if it existed in reality. Their reason: “They don’t want to be a burden.”

For all its grotesque premise, “Plan 75” diverges from expectations of a “futuristic sci-fi” aesthetic. Instead, it adopts a more realist style of cinematography, effectively sparking a sense of urgency as the story unravels as “an extension of our real world today,” Hayakawa said.

At present, about 30 percent of Japan’s population is over the age of 65, according to AFP. This fraction is expected to accelerate in the years to come.

“What worries me a lot is that we’re in a social reality that would very much favor such a radical solution,” Hayakawa told the outlet. “It’s scary.”

Featured Image via The Upcoming 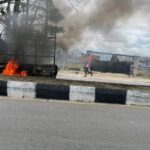