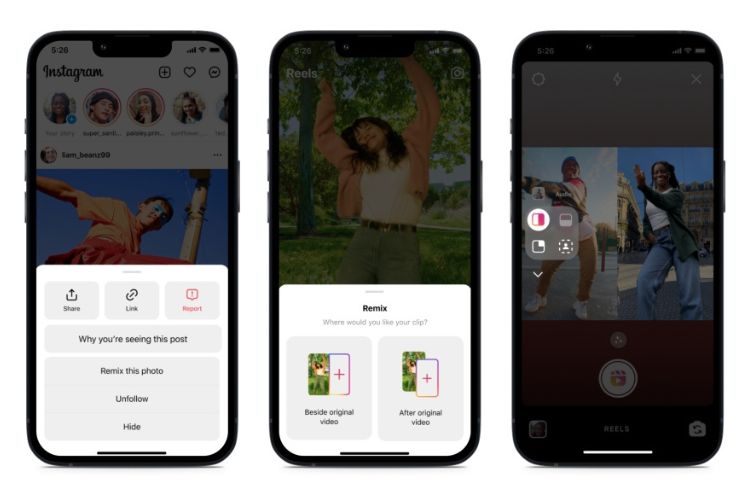 Instagram has been betting big on the Reels part and is often seen bringing new updates for it. The recent one will allow people to turn their photos into Remixes, allowing people to form some intriguing Reels. This comes after the social media platform introduced the ability to remix Reels.

Instagram, in the coming weeks, will let people with a public account convert their new photos into Remixes, which can then be used for Reels. This will provide a way to create more types of Reel content, which currently is one of the priorities for Instagram.

It is said that the option to remix a public photo will be enabled by default but users will get to switch it off if this is not their cup of tea. Meta has revealed that there will be new Remix layouts and people will be able to add their own clips to an existing Reel at the end of the original one.

There’s an update for Templates too; people can use a template with preloaded audio and clip placeholders for further ease. Templates can be found by selecting the camera option under the Reels section. Instagram has also introduced the Dual feature, which will allow users to capture Reels using the front and rear cameras simultaneously.

Another change to expect in the coming weeks is the conversion of video posts into Reels. New video posts, less than 15 minutes in duration, will be turned into Reels. These will appear in a full-screen format, much like how Reels appear on the platform. This ability was previously a test and has now been made official. Old video posts will remain so.

Public accounts will have a high chance of getting recommended for their video posts-turned-Reels. But, the Reels need to be less than 90 seconds long.

We are still awaiting these features to arrive and this shall start happening for all users soon. Do share your thoughts on whether or not these changes are helpful in the comments below.