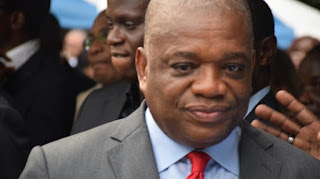 Chief Whip of the Senate, Senator Orji Kalu, has said he is under serious pressure to declare his intention to run for the Presidency and pay a visit to President Muhammadu Buhari as recently done by two of his colleagues in the ruling All Progressives Congress.

Recall that chieftains of the APC, Asiwaju Bola Tinubu, and governor of Ebonyi State, Dave Umahi, had visited Buhari at the State House in Abuja and declared their presidential ambitions.

Fielding questions from State House correspondents on Monday, Tinubu stated that he informed Buhari of his intention to run in the 2023 presidential election.

Governor David Umahi, on Tuesday, also paid a visit to the President. Shortly after their meeting, the Governor said he briefed Buhari of his intentions to contest for the 2023 APC presidential ticket.

Kalu, a former governor of Abia State, who is believed to be nursing ambition to succeed Buhari, in a statement he signed on Wednesday, said he’s waiting to see if the APC will zone the Presidency to the South.

He said this will determine if he will also pay a visit to the President.

According to him, “Fellow Nigerians. I have been inundated with pressured requests to also declare my intention to run for the Presidency of our dear country and visit Mr President following visits by my other brothers to Mr President yesterday.”

He added, “As soon as the party zones the Presidency and southern Nigeria is zoned to produce the presidential candidate of our party, my train which is already steaming shall take off with a visit to Aso Rock Villa and brief Mr President of our collective decision. May God bless you all.”