Over one year after the launch of the thermal powerhouse, Blackview BV9900 Pro, the Blackview brand has put its follow up, the Blackview BV6600 Pro, on sale. Hailed as the most affordable Thermal by FLIR® rugged phone, the BV6600 Pro is a strong competitor with its predecessors including its original one, Blackview BV9800 Pro. For people who are eager to know the differences between one another, this article is going to give you a full picture.

Before diving into the difference part, it’s necessary to know that all these rugged phones are IP68 & IP69K & MIL-STD-810G certified, which means that they are often waterproof, impact-resistant, and adapted to extreme conditions. They can be put into a variety of high-demanding environments where average phones simply can’t bear. In this aspect, they are no different from one another. Now, cut to the differences.

Blackview BV9800 Pro, released in 2019, is the first thermal imaging rugged phone from Blackview. Back then, it was quite a hit with the flagship-level specs. After 2 years the operating system is a bit out of date. Other than this, it’s quite captivating in many ways.

The screen is the largest among the three phones, with a size of 6.3 inches. The resolution is 2340-by-1080, producing sharp, clear images and text. So if the big screen is your thing, the BV9800 Pro is out of question your go-to pick. The waterdrop notch on the front houses an AI-driven 16-megapixel selfie shooter while the back locates a Sony® 48-megapixel rear camera. Under the hood, it sports a MediaTek Helio P70 processor, 6GB of RAM and 128GB of storage, with an expandable storage slot for an up to 128GB TF card. And it supports NFC and Global LTE bands.

The battery is impressive with a capacity of up to 6580mAh. Based on the official statics, it lasts 30 hours of music playtime on a single charge. So basically it can be expected to last for 2 days over moderate use. And it supports wireless charging, which is a big asset for those who seek ultimate convenience when it comes to charging. And the barometer is a lovely feature for those who love hiking and mountaineering.

The design is a typical industrial style — rugged and robust. Metal rear camera module and metal side frames. The back, made of double-shot molding TPU, is aesthetically pleasing with classy engraved lines. The screen is protected by the Corning® Gorilla® glass 5 featuring great resistance to scratches and impact.

Blackview BV9900 Pro, released in 2020, is the second thermal rugged phone from Blackview. It’s on the top in terms of overall performance and comes with a freshly minimal and chic look. 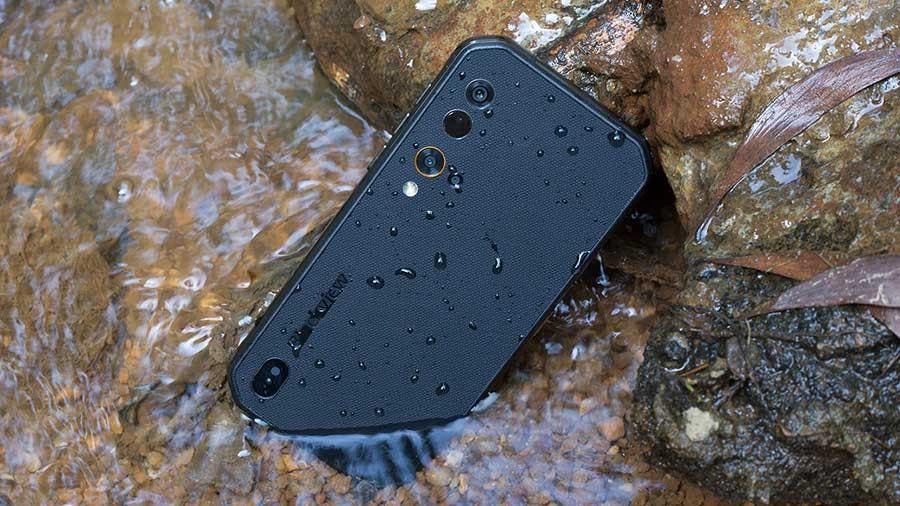 The BV9900 Pro is powered by a MediaTek Helio P90 processor, coupled with 8GB of RAM and 128GB of UFS 2.1 ROM, which excels at multi-tasking and overtakes the other two in this aspect. It sports a 5.84″ FHD+ waterdrop screen, made of Corning® Gorilla® Glass 5, with a high level of clarity and toughness. And it has Sony® 48MP rear camera, 4380mAh battery, and supports NFC for cash-free payment and Global LTE bands that are great for worldwide trips. If there’s any flaw — it runs Android 10 OS, same as the BV9800 Pro.

Though the three phones are outdoor dedicated, the BV9900 Pro is in particular outstanding when it comes to extreme conditions. This is thanks to its IceMode that enables it to work in freezing temperatures as low as -30℃. It’s an asset for people who have extremely freezing winters or set their mind on climbing, polar adventure, etc. Like the BV9800 Pro, the BV9900 Pro also supports a barometer for hiking.

Most of all, it’s designed with health caring in mind — it’s equipped with a heart rate sensor that offers valuable insight into your cardiovascular and overall health, so you can fine-tune your training plan to reach a specific fitness goal and make the most of your workouts.

In terms of design, it’s surprisingly one that doesn’t look like a rugged smartphone. The whole body is slim and relatively light compared to the others. The back is simplistic to the point that it’s close to the business style. But the toughness is no weaker as it’s supported by a full aluminum alloy frame and shock-proof silica gel on the back. On the front, it’s protected by the scratch and impact resistant Corning® Gorilla® Glass 5.

For anyone that wants to experience high-end thermal technology without burning the wallet much, Blackview BV6600 Pro is the exact one. 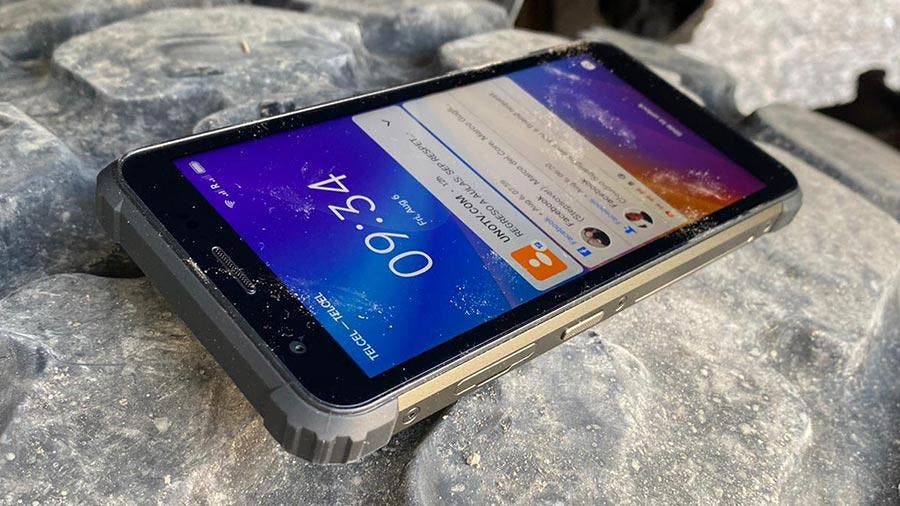 Like the aforementioned two thermal phones, the BV6600 Pro is equipped with the same-spec thermal camera from FLIR®, but the pricing is much friendly, almost twice as low as the BV9900 Pro. Most of all, it comes with the biggest battery with a capacity of 8580mAh, which sustains 4G/WiFi standby time up to astonishing 430 hrs (18 days). And it supports reverse charging so it can be a power bank in time of need. All of these make it perfect for heavily outdoor-dedicated persons.

So what’s the compromise with the big price drop? Well, the BV6600 Pro’s processor is middle of the pack, that is, MediaTek Helio P35, coupled with less storage, 4G RAM 64GB ROM. But still, it’s an octa-core processor, smooth operation is guaranteed. For the camera set, it has a Samsung® 16MP rear camera featuring PortraitColor mode, Mono mode, Beauty mode. The display is 5.7 inches, of HD+ clarity.

Nevertheless, it runs the latest system, Doke 2.0 OS, based on Android 11, which has a bunch of efficient functions like System Manager and App freezer for great optimization on the operation fluency.

As for design, the BV6600 Pro is similar to the BV9800 Pro, featuring a classic rugged design. It has nano-injection molding aluminum alloy side frames fixed with screws on each side. The top and bottom ends are covered with silica gel & PC that seamlessly extends to the textured back where on the upper side locates a uniquely hexagon-shaped camera metal module and on the lower side is a lanyard hook providing convenience for climbing activities. The phone’s four corners have thickened TPU soft rubber for extra protection from any possible drops and shocks.

Prices decrease from BV9900 Pro to BV6600 Pro. Luckily three of them have discounts available now. Check below: 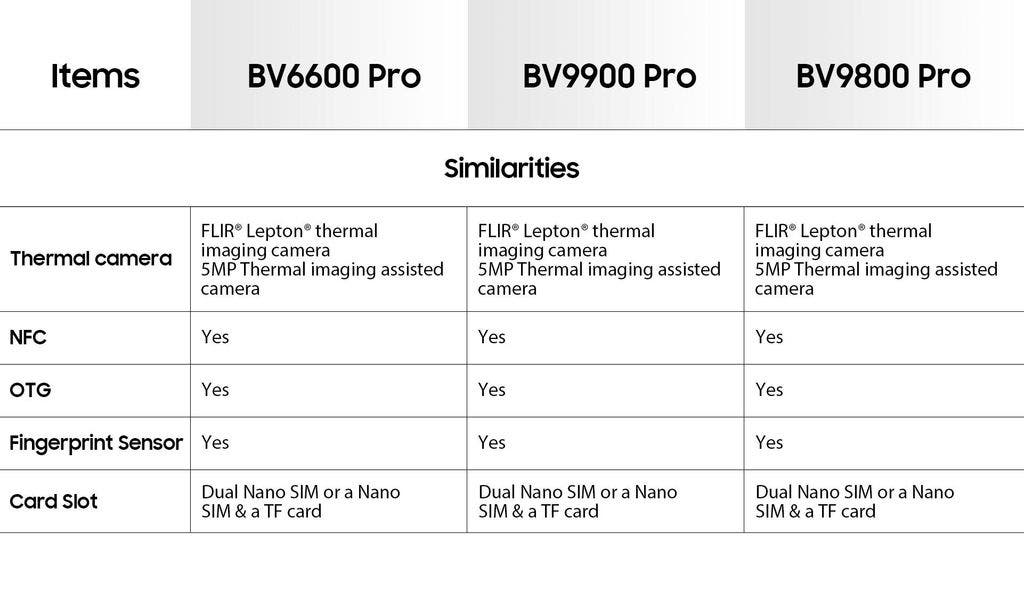 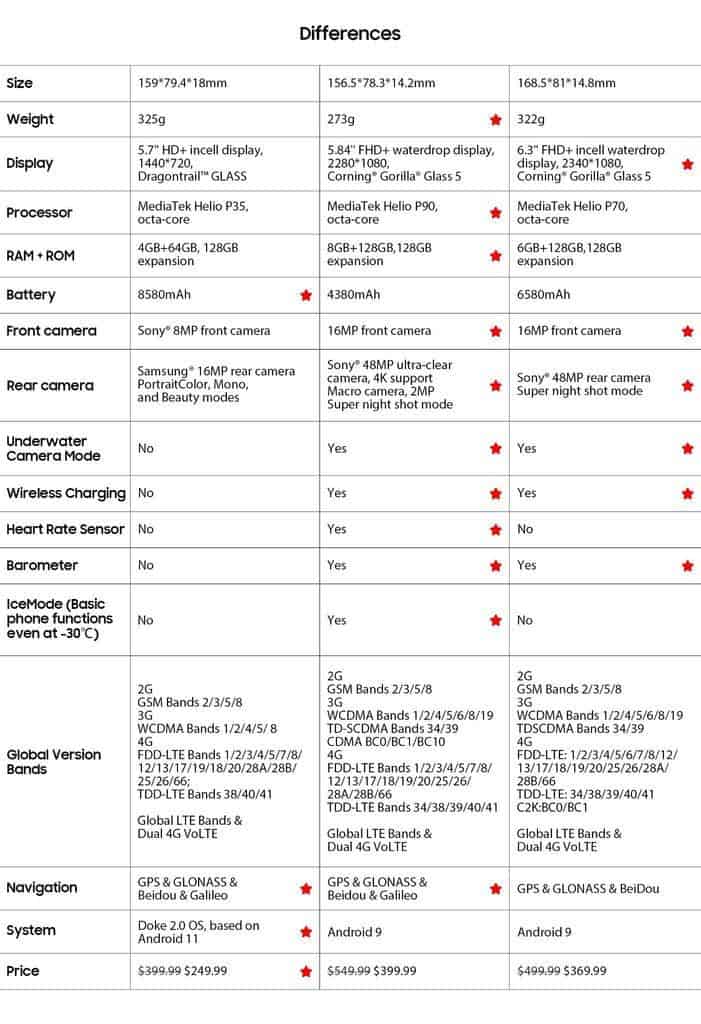 Wrap-up: Which Should You Buy?

As you can see, the BV9900 Pro and the BV9800 Pro share many similarities and are excellent in terms of hardware specs. With that being said, the BV9900 Pro is better if you expect the smoothest operation and multi-task and some useful extras. And the design is really effortlessly chic.

But ultimately, for most people, the BV9800 Pro is enough: it can handle virtually any task you throw at it and it features a big screen and a large battery. The camera, just as impressive as the BV9900 Pro, can take stunning images and videos.

Those who should opt for the latest BV6600 Pro include people who have set their heart on a thermal imaging phone while not planning to cost a fortune. And the largest battery and the latest system of the three are a bonus for them.