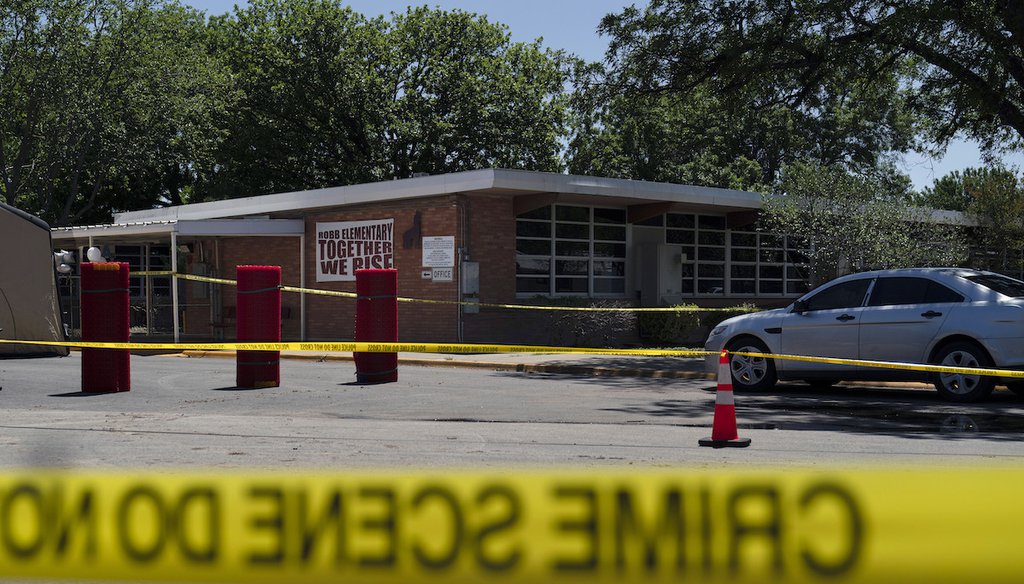 Misinformation after the May 24 shooting that killed at least 19 children and two teachers at an elementary school in Uvalde, Texas, followed a familiar playbook.

As authorities pieced together what happened, unverified rumors and hoaxes about the attack, the victims and the shooter stood in for confirmed facts.

Almost immediately after the Uvalde attack — and like the Buffalo supermarket shooting a week prior — baseless claims on social media called it a “false flag.” Other social media posts falsely said that the shooter, an 18-year-old U.S. citizen named Salvador Ramos, was an immigrant living in the U.S. illegally. Numerous imposter Instagram accounts purporting to belong to Ramos cropped up online, too.

“There’s been a lot of things that have been said,” said Gov. Greg Abbott, R-Texas, during a May 25 press conference. “Some are correct. Some are incorrect.”

Even Abbott floated some information that hadn’t been confirmed the day of the shooting when he said the shooter had entered the school with a handgun and possibly a rifle. The next day, Abbott said the shooter used one weapon, an AR-15 rifle.

“I’m increasingly upset that the people with the most influence are the most reckless with what they post,” said Mike Caulfield, a research scientist at the University of Washington’s Center for an Informed Public who teaches media literacy tactics. “The people I teach, in general, are not the problem. The people that are the problem are the people with large follower accounts.”

Other public figures have amplified outright falsehoods about the massacre.

Sen. Ted Cruz, R-Texas, and a number of Fox News personalities suggested there was not enough security protecting the school when the attack took place. But officials have said, and news organizations have reported, that police engaged the gunman outside the building and still made it into the school. The shooter was wearing a tactical vest, officials said.

Rep. Paul Gosar, R-Ariz., shared and then deleted a tweet amplifying a hoax from the far-right 4chan message board that conflated the shooter with an unassociated transgender person who had nothing to do with the massacre and does not live in Texas. Ramos was fatally shot by police, and there’s no evidence that he was transgender.

“Now an innocent person’s face has been associated with this absolutely horrific event,” said Caroline Orr Bueno, a postdoctoral research associate at the University of Maryland who studies misinformation. “That is real, tangible, immediate harm.”

How can you sift through what’s real, what’s fake and what we simply don’t know as the news unfolds from Uvalde? Media literacy experts told PolitiFact that people should check where rumors are coming from, verify information across reputable sources, and pause whenever they encounter something that provokes an emotional reaction.

Above all, it pays to slow down. It can be tempting to be the first to share a new piece of information with your friends, Caulfield said, but it’s better to be the “reliable second” person who your friends can trust to properly vet what you choose to pass along.

“You don’t have to weigh in on every piece of news that breaks,” said Alex Mahadevan, the director of MediaWise, a digital literacy project of the Poynter Institute for Media Studies, which also owns PolitiFact. “Especially national tragedies. There’s an overwhelming pressure to satiate your followers or subscribers with an opinion or interesting — but potentially false — detail about a breaking news event. And you don’t have to give in to that urge.”

With a breaking news event like the shooting in Uvalde, the story can change as new details come to light, making it important to ditch the impulse to be first and cross-reference claims with credible sources, such as journalists and government officials.

That type of cross-referencing is especially helpful when the claim you encountered originated with an anonymous social media account, a sketchy website or a screenshot from an unknown source — or when it simply seems too good to be true. But it also applies to information coming from public figures, like the transgender hoax Gosar shared.

Experts recommend searching Google for the original article or source of a claim to see if it’s being framed accurately online.

They also recommend pausing before sharing if a piece of information makes you feel anxious, upset or angry. Misinformation about mass shootings — and especially false claims about a shooter’s identity, weapons or motive that could be leveraged to support a political point of view or redirect blame for the attack — often spreads because it appeals to these emotions.