Samsung comfortably sits as a dominant force in the segment of foldable smartphones. The Korean firm was one of the first to bet on this segment, and unlike Huawei, which had to deal with the ban, Samsung has been free in these past years to improve its foldable lineup and establish a good pace of releases. Samsung has established the Galaxy Z Flip and Z Fold lineups, one is a clamshell foldable smartphone, while the other is a phone that transforms into a tablet. The competition is certainly growing with more players entering the segment, but Samsung is here with another generation in a bid to keep the segment under its belt. While the Galaxy Z Fold4 is the company’s most premium device, the Galaxy Z Flip4 stands as a more affordable take into the foldable segment.

The Galaxy Z Flip4 arrives today with some decent upgrades including a larger battery that will certainly make this device more appealing.

The Samsung Galaxy Z Flip4 brings some improvements in terms of design such as an improved hinge to prevent accidental damage. The device when closed is very small and can easily fit into your pocket. The dimensions in the “locked” state are 84.9 x 71.9 x 17.1 mm. When unlocked, the device reaches 165.2 x 71.9 x 6.9 mm. The glass panels on the back are reinforced with Corning Gorilla Glass Victus+ while the frame still features Armor Aluminum.

The device keeps the 6.7-inch panel, however, the bezels now are slimmer. The panel features Dynamic AMOLED with Full HD+ resolution and a 120 Hz adaptive refresh rate. The device offers a 22:9 aspect ratio with a punch-hole cutout for the 10 MP selfie shooter. 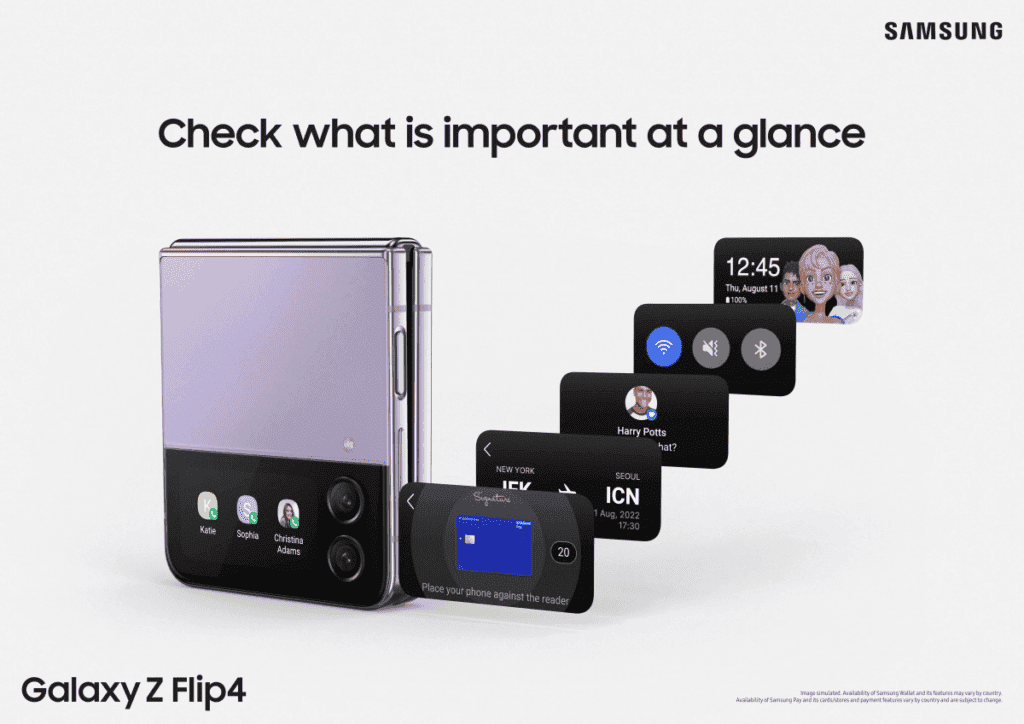 The AMOLED cover screen measures 1.9-inches and boasts a 260 x 512 pixels of resolution. We’re not seeing a change in the display’s size, but Samsung is improving its usability. For instance, there are several options including custom panels and themes that sync with the main UI. You can also reply to messages through speech-to-text and emojis directly from the cover screen. In addition, Samsung is bringing a lot of widgets and quick settings control that allows you to dial your three favorite contacts without opening the phone. It’s also possible to control SmartThings home devices.

Under the hood, the Samsung Galaxy Z Flip4 is one of the most powerful foldable phones of 2022. The device packs the recently released Qualcomm Snapdragon 8+ Gen 1 SoC. The device is paired with 8 GB of RAM and has storage options ranging from 128 GB to 512 GB. 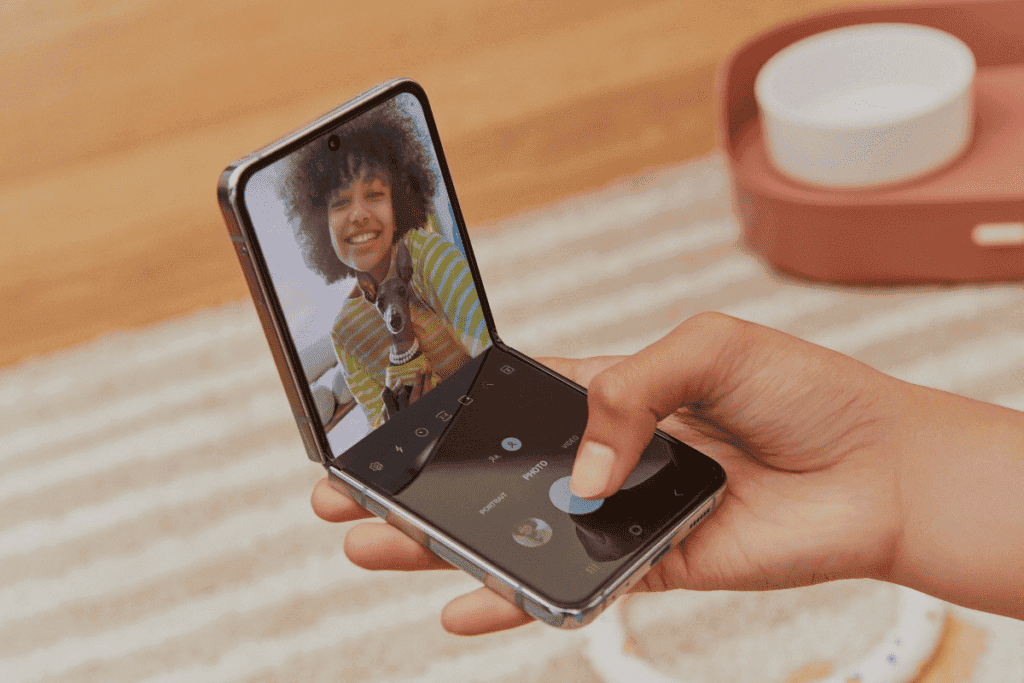 In terms of optics, the phone brings two 12 MP cameras. There is an OIS model with 1.8um pixels and f/1.8 aperture, and another one for ultrawide shots. The specs are similar to the Galaxy Z Fold3, however, Samsung promises big improvements in comparison to the Z Flip3.

The Galaxy Z Flip4 finally improves the battery capacity to 3,700 mAh. For sure, this isn’t the most impressive capacity when we look at standard phones. However, due to the big challenges in this build, that’s a big improvement. For comparison, the phone has now the same capacity as the Galaxy S22 which is a compact smartphone. Samsung may be capable of bringing the Z Flip series to the 4,000 mAh territory in the next year. The company is also improving the charging to 25 W standard. That’s not the most impressive spec, but looking at other Samsung smartphones it’s the maximum you get.

The software side of the Galaxy Z Flip4 is covered by OneUI 4.1 on top of Android 12. The company brings all-new FlexMode options. These include new UX for video calling apps like Google Meet, Zoom, and Facebook Messenger. Furthermore, the Flex mode touchpad with precise controls will be supported on more apps. The multi-window will allow you to launch a growing list of apps on both halves of the screen.

The Samsung Galaxy Z Flip4 will sell in Graphite, Bora Purple, Blue, and Pink Gold colorways. The device will also come in Bespoke Edition via Samsung’s website. This time around, Samsung allows you to mix and match up to 75 unique colorways. 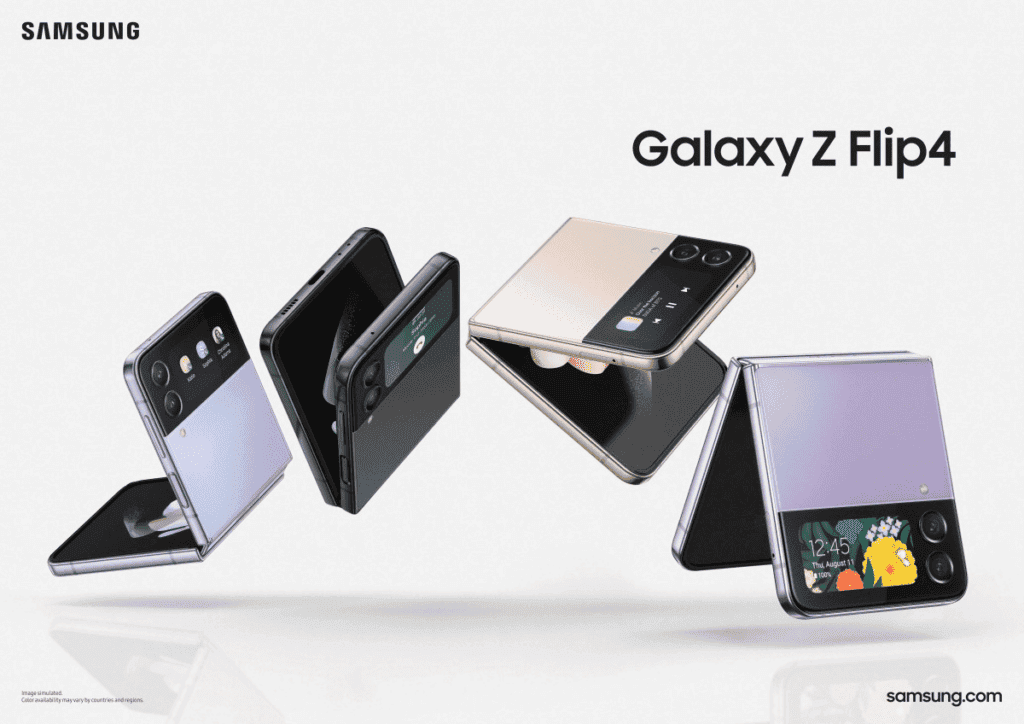 The device’s price starts at $999/£999/Є1,099. It’s already up for pre-orders, but the actual sales begin on August 26. The company also disclosed the Galaxy Watch5 today, check more details here.