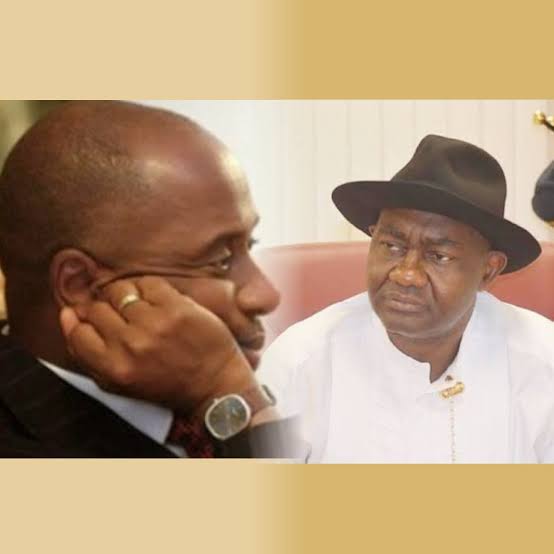 In 2007, while seeking to legally recover his stolen mandate, the cabal in the PDP expelled Amaechi from the party using the non-existing candidature of his cousin, Celestine Omehia. Amaechi won the legal battle, became governor, and eventually won again as his membership of the party was restored through the courts.

Fast forward to 2014, some political buccaneers tried to use Wike to end him politically in PDP.  Rather than being suffocated, he moved to APC and together with other Progressives, and for the first time in the history of Nigerian politics, an opposition party toppled a sitting government.

Following his rising profile, enemies within his party who didn’t like his rising profile and wealth of power yet again started another clandestine move to undermine him and further render him politically incapacitated.

This time around, the willing tool was a close ally and politically beneficiary Sen. Magnus Ngei Abe.

Rising from the experiences of yesterday, Rotimi Amaechi stood his ground to protect and secure his political dynasty, which led to years of political wars sponsored by Wike and executed by Abe.

The end has justified the means. Magnus  Abe has finally been chased out of APC by his undesirable ambition and has forcefully stopped his ownership claim of the APC while shopping for a willing horse, even a dead one in the SDP.

He failed his sponsors this time for lack of tact to execute and achieve their destructive agenda against the party that gave him some national prominence in the Red Chambers. No thanks to Amaechi, anyway!

Meinyie Okpukpo is a political commentator and analyst, he writes from Port Harcourt, Rivers State.