Fact Check: Ron DeSantis – Most of Florida's Lee County wasn't in the cone three days before hurricane, but parts of it were

Florida Gov. Ron DeSantis and Lee County Commission Chairman Cecil Pendergrass rebuffed the questions on Oct. 2, saying the data available before landfall did not warrant such a response.

“Seventy-two hours before the storm, we still were not in the cone,” Pendergrass said during a press conference. “We were working off of data and went off that data.”

DeSantis also said Lee County based its decision on the National Hurricane Center’s track forecast. “They were following the weather track and they had to make decisions based on that,” he said in an interview with CNN. “But you know, 72 hours, they weren’t even in the cone.”

Federal officials echoed the comments from state officials. Federal Emergency Management Agency Administrator Deanne Criswell made a claim about Lee County that was similar to DeSantis’ during an Oct. 2 appearance on ABC’s “This Week.”

But one of the county’s barrier islands, Cayo Costa — where the Category 4 hurricane made landfall — appeared inside the cone on each of eight advisories from Sept. 25. (No advisory was issued exactly 72 hours before Ian made landfall at 3:05 p.m.)

The cone graphic that DeSantis and Pendergrass referenced is often misunderstood, according to the National Hurricane Center. The visual is meant to show the probable track of the center of the storm — not the extent of a hurricane’s reach.

Focusing on the cone itself downplays the impacts of a storm as large as Ian. Still, in Ian’s case, the cone was an accurate forecast of the storm’s eventual trajectory, an expert said.

Matt Rogers, an atmospheric science researcher at Colorado State University, told PolitiFact that the cone graphic from Sept. 25 predicted that the center of Ian would cross the coastline anywhere between Cedar Key and Cayo Costa in Lee County.

“The cone was therefore accurate,” Rogers said. “The cone forecast from Sunday night predicted it was possible for the center of the hurricane to be as far south as Cayo Costa, and that’s what happened.”

The first of the Sept. 25 National Hurricane Center advisories, issued at 2 a.m., showed sparsely populated Cayo Costa inside the cone graphic on its eastern edge.

Other areas in Lee County also appeared inside the 2 a.m. cone graphic, including the northern coasts of Cape Coral and Pine Island. Those areas, along with Cayo Costa, remained in the cone graphic in subsequent advisories issued at 5 a.m. and 8 a.m.

The hurricane’s forecasted track shifted largely north of Lee County in an advisory at 11 a.m. However, Cayo Costa remained in the cone graphic. 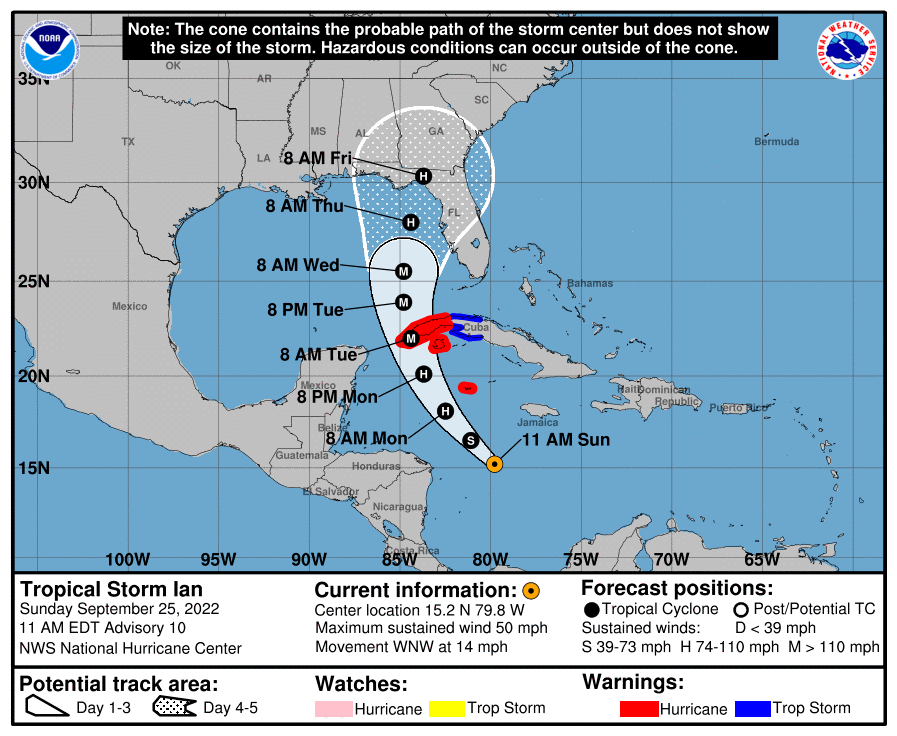 The track continued to shift and began to include the northern coasts of Cape Coral, Pine Island and Sanibel Island by the advisory issued at 5 p.m. Hurricane Ian moved further south by the 11 p.m. advisory and the cone extended to North Fort Myers.

Through all the projected trajectory changes on Sept. 25, Cayo Costa remained inside the forecast cone.

The governor’s office said that DeSantis’ broader point is that storms are difficult to predict and much of Lee County was outside of Hurricane Ian’s path on Sept. 25.

On Sept. 25, the National Hurricane Center said that coastal areas of Lee County were at risk of experiencing storm surges between 4 to 7 feet.
By the following day, Sept. 26, “many areas of Cape Coral and Fort Myers had between a 10 and a 40% chance of a storm surge above 6 feet, with some areas more than 9 feet,” The New York Times reported.
Lee County officials did not issue an evacuation order on Sunday or Monday. The county issued a mandatory evacuation order on Tuesday, Sept. 27. By that night, nearly all of Lee County was in the cone graphic. On Sept. 28 at 3:05 p.m., Hurricane Ian made landfall and devastated the region.

DeSantis and Lee County officials said they used the cone forecast as an indicator of whether evacuation was needed. But experts caution against using the cone graphic as a tool for that purpose and the National Hurricane Center included a disclaimer on each cone graphic issued for Ian.

“The actual extent of the storm radiating out from the center of the storm is obviously much wider than the cone,” Rogers, with Colorado State University, said. “Impacts from the storm will be outside of the cone, especially for large storms like Ian.”

DeSantis said that 72 hours before Hurricane Ian made landfall, Lee County wasn’t “even in the cone.”

Most of Lee County was not within Hurricane Ian’s forecasted path 72 hours before landfall. But one of the county’s barrier islands, Cayo Costa, appeared inside the forecast cone on each of eight advisories issued by the National Hurricane Center on Sept. 25, three days before the storm made landfall there.

Experts stress that the cone does not indicate areas that will be affected by the storm; it indicates the expected center of the storm.

There is an element of truth in that most of Lee County was not in the forecasted center of the storm 72 hours of landfall; but one of the county’s barrier islands was, and focusing on the cone itself downplays the impacts of a storm as large as Ian.

We rate his claim Mostly False.