Some officers of the Federal Road Safety Corps (FRSC) assaulted a driver and injured him in front of his children, wife and mother after seizing his vehicle particulars and mobile phone along Ejule Road in Kogi State.
The officers were also alleged to have invited some thugs to attack other motorists and passengers who had pleaded with the officers to take the driver to the hospital for treatment.


The incident occurred on Tuesday, April 19, 2022, when the victim was returning to Abuja from Okigwe in Imo State.

The victim, Okafor Dodoh who spoke to SaharaReporters on Wednesday in Abuja said they sighted a man with blood-stained clothes, standing close to the FRSC Patrol vehicle at a checkpoint on the road alongside two women and children who were crying.

He said their driver stopped to find out what had gone wrong and if there was any way they could offer help.
He said the driver narrated to them how he was manhandled and beaten to a stupor by FRSC officers, who also seized his vehicle particulars and mobile phone.
Okafor said, “We approached the senior officer in charge to plead that they return the man’s papers to him so that he could continue his journey as he was travelling with his family. We later learnt that the women wailing and crying were the injured man’s mother and wife. His children we saw were also crying inside his vehicle.
“An argument ensued when the senior marshal refused to release the man’s particulars. We insisted that the man needed treatment and has to be allowed to go treat himself or at least get some first aid since the men (FRSC officials) said they cannot offer any assistance to reduce the bleeding.
“While the back and forth went on, one of the men made a call in a language I did not understand but before he ended the call, I heard him say ‘now, now.’ By now more vehicles had stopped and several passengers and drivers joined in pleading that the man whose papers had been confiscated after he had been beaten should be allowed to go treat himself immediately.
He said to their surprise less than five minutes later a group of thugs arrived at the location on the order of the leader of the team in a 406 Sedan and beat up everyone in sight while dragging people out of their vehicles.
He explained further that their driver in the process tried to manoeuvre his vehicle with the aim of leaving the scene but was blocked and beaten to a pulp.
“I was inside the vehicle but the thugs, targeting me directly on the instruction of the marshals began to hurl objects at me. Many of the thugs and two of the marshals attempted to drag me out of the vehicle and damaged my wristwatch.
“A woman and her baby sitting next to me were also beaten. We only managed to escape when a police patrol team arrived at the venue before the driver was allowed into his vehicle to take off,” Okafor added.
Meanwhile, in a petition exclusively obtained by SaharaReporters, written by Okafor and addressed to the Corps Marshal  Federal Road Safety Commission, Boboye Oyeyemi demanded a thorough investigation into the matter and payment of compensation to the affected driver and the passengers of the attack.
He also called for disciplinary action against the officers involved in the assault, adding that their action had brought shame and ridicule to the commission.
The petition read in part, “I write to bring to kindly bring to your attention sir, a very ugly experience I had on Tuesday, 19th April 2022 at around 3 pm while travelling in an Imo Transport Corporations’ Vehicle from Okigwe in Imo State to Abuja. We had a smooth journey until we arrived at a certain bad portion of the road at Ejule where men of the Federal Road Safety Commission (FRSC) mounted a checkpoint where they performed their legitimate duty of inspecting vehicles’ particulars.
“I would, with all sense of responsibility sir, expect a full investigation into this matter within the next fourteen days after which if nothing is done, I shall have no option but approach the court to demand the enforcement of my fundamental human rights and those of other victims “
Also, the video and pictures obtained from the scene of the incident showed FRSC hilux patrol vehicle with registration number C. 45RS  and command code  8.31 ( A) with the driver soaked in blood and many other passengers with injuries. 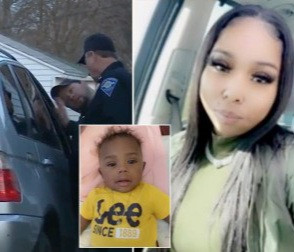