Elon Musk says he’s out as CEO of Twitter.

Musk confirmed the news in an amusing tweet Tuesday night…”I will resign as CEO as soon as I find someone foolish enough to take this job!”

I will resign as CEO as soon as I find someone foolish enough to take the job! After that, I will just run the software & servers teams.

He added…”After that, I will only run the software & servers teams.” Pretty shocking stuff from a guy who recently purchased the company for $44 BILLION!! 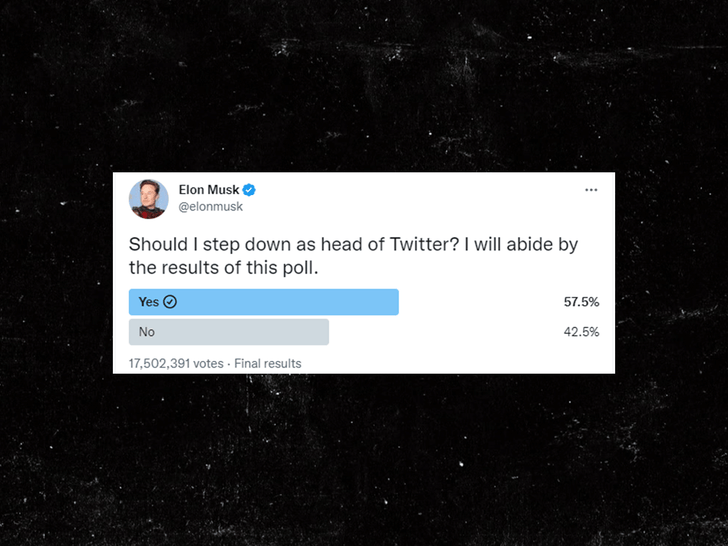 Of course, the move stems from a poll Musk took earlier in the week, asking millions of Twitter users to vote on whether he should remain the boss. More than 57 percent of the people voted to oust Elon, compared with just over 42 percent who wanted him to stay as head honcho.

The poll seemed tied to Elon’s misstep on Sunday when he implemented a policy that barred accounts from promoting competing platforms like Facebook and Instagram. Twitter users expressed anger over the new rule because they’re accustomed to sharing messages across open social media networks. Musk quickly buckled, adjusting the policy to suspend accounts whose primary purpose is to give free advertising to rival companies.

Elon’s troubles with Twitter have only been mounting. Last week, Musk temporarily suspended the accounts of several prominent journalists after he accused them of doxxing him by revealing his personal information and the whereabouts of his private jet in real-time.

The reporters claimed Elon was getting retribution for their negative coverage of him. It all came to a head during a heated online video chat, which ended with Elon abruptly leaving their meeting.