Elon Musk is not simply a name, but the most trending term in this world of technology. The mind behind successful companies like Tesla and SpaceX is constantly in the headlines for various reasons. Now, it steals the headlines again, this around in a news story involving the Boring Company. According to a recent report from Electrek, Elon Musk and its Boring Company have just submitted a proposal for a promising and complex 6-mile (almost 10 Km) long Loop tunnel project in Miami. If it gets the green lights, it will launch as the second of such full-scale commercial deployment of the transportation system.

To those unaware, Boring Company’s Loop system consists of tunnels in which Tesla electric vehicles travel at high speeds between stations to transport people within a city. The first deployment of such a scale has been the Las Vegas Convention Center Loop. It consists of a 1.5-mile-long (2,41 Km) tunnel with three stops at the city’s large convention center. That may not be a big tunnel, but we expect it to grow bigger in the coming years. In fact, Las Vegas has approved an expansion of the Loop to connect the entire strip and the airport. The Boring Company already completed the first part of the expansion to the first Casino.

Once completed, the Loop Tunnel in Las Vegas will become th first Loop covering an entire city center. As a result, Boring Company wants to fly to higher heights, in this case to Miami. The next Elon Musk project goes to Miami city and we don’t think the plan involves less than the full commercial center. Apparently, the city is already in talks with the company. However, the official proposal is moving things further.

Below you can see a map of Boring Company current proposal for the new Loop Tunnel: 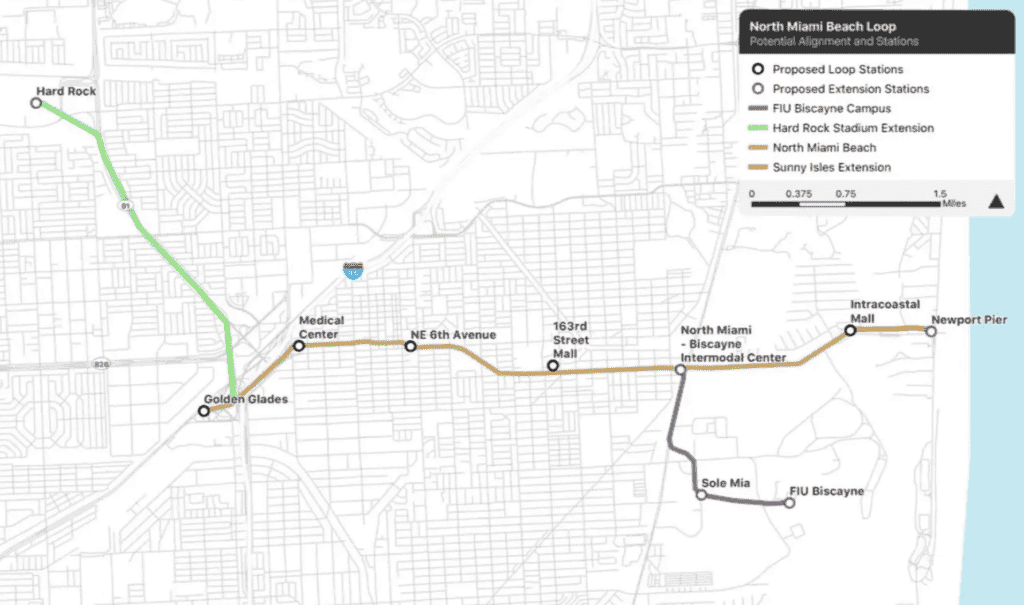 Obviously, the project will have a high cost and will need a big investment. According to the report, the total investment goes between $185 million and $220 million. Although that may sound like a high price, it sits as a fraction of the cost of any other similar transportation system, for example, the subway which has been one of the most recurring transport systems in the modern age.

North Miami Beach’s commissioner Michal Joseph states that the new Loop Tunnel may bring relief to the city’s traffic. In fact, in Miami, traffic congestion has become a problem.

According to Elon Musk’s Boring Company, the project will need three years to be completed. However, that still requires regulatory approvals. The city certainly wants to go beyond with the project, but still needs to convince the regional, state, and federal governments. After all, the funding needs to come from any of these parts.

While a promising project, we’re yet to see if the company and the city will have success dealing with the administration. Especially, after many problems involving Tesla in recent times such as the unexpected braking and the controversial, but funny, use of Boombox.

In the same way, there are still some doubts when it comes to the effects brought by the Loop. However, Elon Musk has been promising a full-scale simulation of how it would alleviate traffic for a long time. Unfortunately, he is yet to provide it.