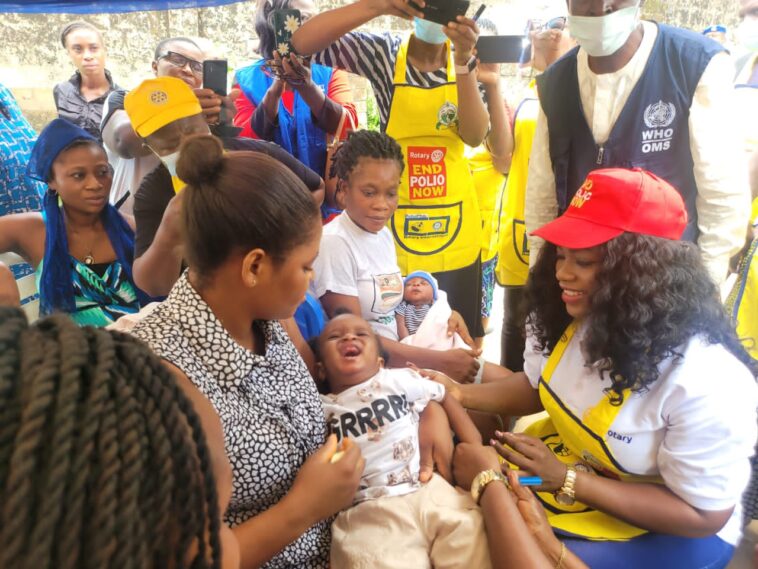 The Cross River State Government has set up a Rapid Response Team across major borders in the state to optimize Poliomyelitis Vaccination and other childhood killer diseases in the state.

Wife of the state Governor , Dr Linda Ayade made the disclosure during the flag off ceremony of the Second Outbreak Response on Poliomyelitis at the Aku Nursery and Primary School, Akim,  Calabar Municipal Area Council.

Dr Ayade said it has become imperative to strengthen border surveillance and achieve 100% record in Immunization in the state owing to the continuous influx of children into the state from neighbouring states before during or after similar  exercise.

Dr Ayade who was represented by the Director General of the Cross River State Primary Healthcare Development Agency, Dr Janet Ekpenyong said, so far, Cross River State have recorded impressive outcomes in previous exercises through the combined efforts of stakeholders who have shown strong will in combating contagious diseases.

She said, over 900,000 children between the ages of 0 to 59 months will be administered with two drops of the oral vaccines which will help build their immunity and protect them from the wide variant Poliomyelitis virus as well as complimentary medication for other antigens.

She applauded stakeholders including traditional and  religious leaders, heads of government parastatals developmental partners for their contributions to a healthy state while also assuring them of Governor Ben Ayade’s continued interest in improving the state’s health sector.

She further directed health workers to put in their best to ensure that no child is missed all through the exercise with an appeal to parents and caregivers to avail their children the opportunity to be immunized and develop immunity for life.

“Today we are flagging off the Outbreak Response 2 campaign against the dreaded type2 poliovirus. In this particular campaign, we are targeting  children between the ages of 0-5 years. This is because we want to ensure that Cross River State does not record any case of polio.”

“The Outbreak Response campaign affords us the opportunity to ensure that health workers reach out to children in hard-to-reach areas across the state.”

“We are hoping to vaccinate over 900,000 children and we believe that this will afford us the opportunity to ensure that every child is protected against the virus especially those in border communities as we have set up a border surveillance and review team to ensure 100% coverage.

“Recently, Nigeria was declared polio-free and all the three types of polio were no longer in Nigeria. However, the type2 vaccine derived polio  reemerged in some states and that is why the outbreak response was introduced to see that we can curb the spread, since we can’t control those coming into our state, we must ensure that diseases don’t have free and uncontrollable access to our people.
“We have also done border synchronization where people from this other part of the country reach out to other countries to ensure that those who are close to our borders are also vaccinated.”

“So far in Cross River State, we do not have any case of polio and we hope to sustain the status in the state by ensuring that every child is protected against the virus.”

“So in this particular campaign, children who are on the other side of the border divide will be also vaccinated. These are measures to ensure that we do not have those diseases crossing into our state.”

“Polio is a highly infectious disease that affects the nervous system of the body and that is why we do not take this disease for granted.”

“It is a disease that once you contact it, there is no cure. The only thing you can do is to prevent it. Polio has caused lots of damage, not just on the health of the children but also the psychological trauma of a family having a child who cannot walk.”

The Director, Public Health, Cross River State Ministry of Health, Dr. Iwara Iwara, commended the state government for the political will to support immunization in the state, adding that mothers and caregivers should not compromise on the platform aimed at creating a new pathway for health in the country.

On her part, the Director of Immunization and Disease Control who is also the State Immunization Officer, Cross River State Primary Healthcare Development Agency, Mrs. Joy Chabo said, “It is imperative to note that polio mainly affects children under 5 years of age. There is no cure for polio. It can only be prevented.

“That is why the campaign was put in place to eradicate circulating variant Polio Virus Type Two (PVT2) amongst children and reduce childhood diseases. During the campaign, vaccinators will be seen moving from house to house, religious houses such as churches, mosques and traditional worship centers, as well as creches, recreational centers, markets, shopping malls, etc.”

Earlier in her remarks, the Proprietress of Aku Nursery and Primary School, Chief. Mrs. Nkoyo Uboh thanked the state government for bringing the campaign to her school and also urged parents residing in the state to make their children available for vaccination to avoid being paralyzed.

One of the benefiting mothers, Mrs. Emem who spoke on behalf of the mothers, thanked the government for such a move, adding that it will help their children grow in good health.

“I want to thank the government for this vaccination. With this exercise, we are sure that our children will grow in good health.”

The event also had in attendance the World Health Organization (WHO) Consultant in Cross River State, Dr. Pella, the state Coordinator of the African Field Epidemiology Network (AFENET), Dr. Isika, the State Social Mobilization Officer, and Mrs. Nsa Ekpenyong amongst others.