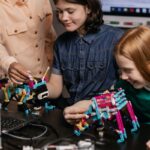 A fully-funded programme designed to help teachers and students build confidence in coding and robotics had a fantastic debut in the 2021/22 academic year, delivering training to over 500 teachers across the UK using LEGO® Education Academy kits.

Prime kits, to help pupils develop practical skills and bridge the gap between the digital and the physical world.

This programme was developed specifically for 8 – 14-year-olds attending state schools. Fully funded by BAE Systems, the Royal Navy, and the Royal Air Force, the programme focused on under-represented groups as it set out to inspire the next generation of scientists, engineers, and technicians.

Developed for the three partners by education charity, The Smallpeice Trust and Raising Robots, an authorised LEGO® Education Partner, the programme tasked pupils with a virtual humanitarian aid mission on an isolated volcanic island in the South Atlantic Ocean. Throughout the Earthquake Rescue Mission, pupils had to successfully code their LEGO® Education SPIKE Prime Robot Rescue Vehicle to react to an earthquake.

The programme received overwhelmingly positive feedback from pupils and teachers alike, with 92 per cent of students surveyed saying they learnt something new from Coding Success. The most common benefits children took away from the programme were enhanced problem-solving skills and improved teamwork.

“As the requirement for digital skills grows, coding is becoming an increasingly important field for young people to explore and harness. Working with the Royal Navy and Royal Air Force to support the Coding Success programme, we’ve given over 40,000 students the chance to get hands on with coding.

“Alongside digital skills, it was positive to see students develop other key skills such as problem solving and teamwork, all of which play a vital role in the workplace. The programme was designed to support learning these skills through guided practical activities.”

One of the most positive elements of the programme was its success in engaging female pupils with coding. Science, technology, engineering, and maths (STEM) subjects have traditionally had barriers to entry for females, with fewer girls engaging with STEM subjects at school and therefore fewer women working in these sectors. However, nearly half of the pupils taught in this programme were girls.

Oliver Smith, a Science Technician at Holmleigh Park High School, one of the participating schools, had high praise, saying:

“It’s great to see positive responses and enthusiasm, especially from girls when my previous career was heavily male dominated within technical roles. I gave some unprompted feedback to a tutor about one student who has been particularly enthusiastic and received the response “This is such a positive thing for her as she does get a bit anxious at times.” This is for a Year 7 student with no other coding experience!”

A year 6 female pupil from a Primary School in Stoke Poges said:

“The best thing I did was trying out my code on the robot and then, if wrong, checking back to see where I went wrong and putting in the right code.”

In addition to positive pupil feedback, the programme was highly successful in helping teachers to progress their professional development. Of the 542 teachers trained, 282 were primary and 260 were secondary teachers. A three-and-a-half hour training course delivered by a LEGO® Education certified trainer significantly boosted teachers’ confidence, made them feel more comfortable with the material and underlined the fact that the programme had a strong positive outcome on pupils, in particular on their career development.

As Coding Success gears up for a second year, the partners behind the programme hope to expand their reach and deliver coding lessons to even more children across the country. As Coding Success continues, the aim is to inspire the next generation of diverse and inclusive coders.