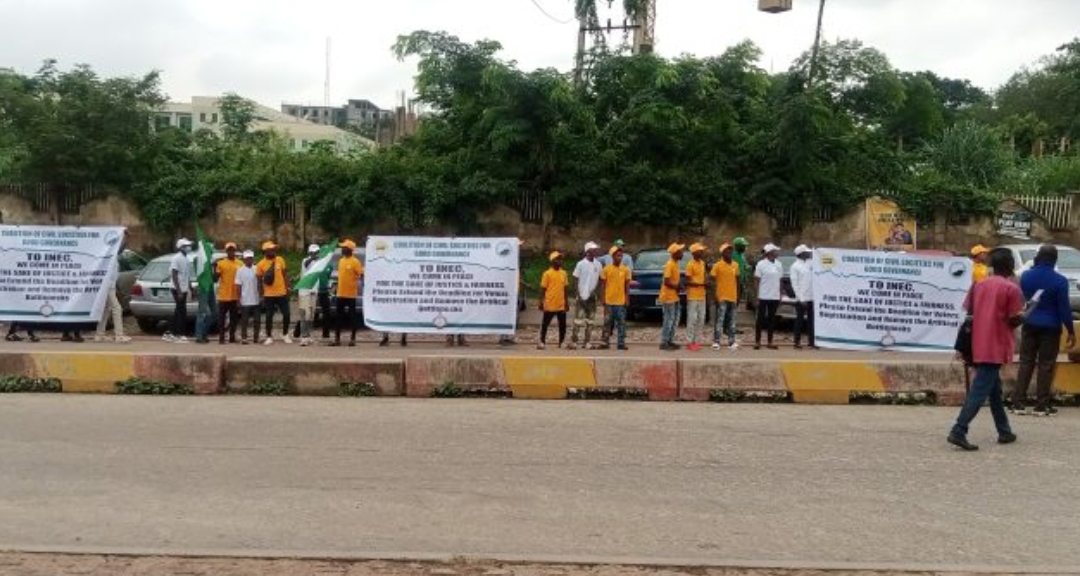 A coalition of Civil Society Organisations (CSOs) for Good Governance has appealed to the Independent National Electoral Commission (INEC) to further extend the July 31 deadline for the suspension of ongoing Continuous Voter Registration (CVR).

The coalition made the appeal in a letter signed by its Convener, Professor Theophilus Ndubuaku, addressed to INEC Chairman and submitted at the commission’s headquarters on Friday in Abuja.

According to the letter, the CSOs urged INEC to magnanimously consider extending the deadline for the exercise in favour of the 2023 general elections.

The CSOs said that its appeal was anchored on information reaching it from several parts of the country, across the six geo-political zones.

It stated that large segments of the population have not been able to register after queuing up at various registration centres without any hope of being registered.

“If this deadline is not extended, millions of Nigerians will be disenfranchised and since this problem may enhance the narrative of marginalisation, which cannot augur well for democracy in Nigeria.

“During the anticipated extension of the deadline for voter registration, INEC will have the opportunity of addressing the lapses which have been experienced.

“By law, INEC enjoys the liberty of official closure of 90 days to the elections, so extending it by at least one month will enable good citizens of Nigeria to register,” the letter stated.

Mr Ndubuaku, who led members of the society in a protest to submit the letter, urged INEC to consider the plea of Nigerians.

“Some people are afraid that they may not be able to register in the remaining two days.

“We know the tenacity of INEC that you can extend it a little bit, which will still be within the law.

“We know you have extended it several times. You have tried, but all over the country there are still long queues,” Mr Ndubuaku said.

He said while the coalition could not force INEC to extend it as well as know its constraints, they believe that INEC could still consider the request, “even if it is to ask for more funds which is justifiable”.

Mr Ndubuaku said that if the request could be granted, the coalition made up of about 25 CSOs, would mobilise support of NIgerians for INEC on the exercise.

Receiving the letter, the Assistant Director, Security Unit, INEC, Endurance Babaginda, said that the letter would be forwarded to the INEC chairman.

The commission has fixed July 31 as the deadline to allow it perform the legal requirements it has to undertake before the general elections.

These include  clean-up of voter register, display details of the new registrants at each of the 8,809 Registration Areas (Wards) across the 774 Local Government Areas and printing of millions of Permanent Voter Cards (PVCs).

The deadline was earlier fixed for June 30.